The first major test of Ayushman Bharat, a program of assured health care for millions of India's poor, was in Muzaffarpur - and it failed miserably.

India is replete with deja vu moments, and the more things change the more they remain the same. In 2017 alone 175 children had died of encephalitis in Gorakhpur; today, as we applaud India’s win over Pakistan at the World Cup, 156 have already died in Muzaffarpur of the same disease. The only thing that has changed in between is the grand introduction of the Ayushman Bharat or the PMJAY programme which had assured health care to 500 million of the country’s poorest. The epidemic in Muzaffarpur was its first major test, and it has failed miserably.

I rarely watch the trash that is churned out on our television channels every evening, but a programme on the Muzaffarpur tragedy by Faye D’Souza on MIRROR NOW on the 18th evening made the maggots crawl on my decaying conscience like nothing before. It painted a horrifying picture of a district hospital with doctor-less wards, no medicines, no electricity, an all pervasive blanket of filth, rotting food for patients and dying children packed two and three on beds. All certified to be kosher by the visiting Union Health Minister, a Chief Minister and a state Health Minister who attributed the deaths to consumption of “lychees” on an empty stomach and the administration’s preoccupation with the elections! As one of the panelists on the show (a doctor himself) said: not even a healthy man would survive in these wards after three days.

What happened to Ayushman Bharat, that much vaunted panacea for universal health? Why could it not save these children? The answer is simple: because it is nothing but a quick fix, an M-seal that simply papers over the cracks without actually repairing it. It is not that PMJAY is defective per se, the problem is that it does not address the root cause of the problem, which Muzzafarpur (like Gorakhpur earlier) has brought to the fore: an abysmal lack of both public and private health infrastructure in the rural areas. It is an excuse for the government abdicating its primary responsibility, pandering to its Guinness phobia: the largest political party in the world, the tallest statue in the world, the biggest income distribution scheme in the world, the biggest health care programme on the planet, and so on. These impressive statistics merely hide an ugly truth- the rural poor have no access to health care because it just doesn’t exist on the ground, and PMJAY exists only on paper for them. 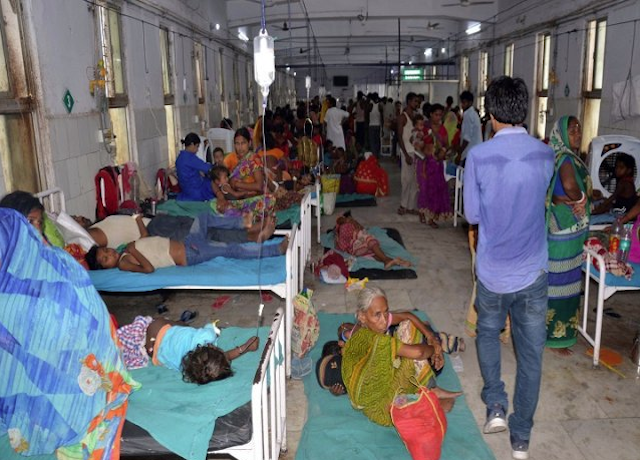 India spends less than 2% of GDP on health, as against a global average of 6.5%; the Union budget provides Rs. 32000 crore for the sector, a mere Rs. 300 per head! WHO norms provide for a bed intensity of 3.5 per thousand population, whereas our figure is 1.3, and the shocking reality is that 70% of these beds are in the top 20 cities of the country. There exists a mind boggling shortage of doctors and nurses- a deficit of 1.5 million doctors and 2.4 million nurses- and we churn out only 50000 doctors every year from our medical colleges. It has been estimated that to cover these deficiencies an additional investment of Rs. 1.65 trillion is needed, 2% of our GDP.

It is this yawning chasm in health infrastructure that the govt. needs to address; its failure to do so means that Ayushman Bharat can at best benefit only the urban populations, leaving 60% of India to contend with more Muzaffarpurs in the future. The essence of PMJAY is enabling private sector hospitals to take up the slack in availability of govt. infrastucture, but this business model fails when there exists no private health sector, as in our rural areas, because there is no money to be made there. Where then does the critical patient go? Back to the non-functional PHCs and corruption ridden govt. hospitals which are charnel houses in any case, as Faye D’Souza’s programme so shockingly revealed.

The govt. continues to live the illusion that big ticket announcements and projects will solve the problem: as evidence we had the Union Health Minister proudly proclaiming this week that a Super Speciality hospital has been sanctioned for Muzaffarpur. It will not help, because in the absence of primary health care the patients would have died before reaching the mythical super hospital. Studies have repeatedly shown that 80% of ailments can be managed at the PHC level if only governments were serious about investing in these institutions. Instead, as the MIRROR TODAY report has revealed, 90% of Muzaffarpur’s PHCs are non-functional. Ditto for most other states. If they had been functioning the majority of these dead children would have survived.

It is therefore no surprise that Ayushman Bharat could not save them, just as that other out-sourced gift to the private sector, the PM’s Kisan Bima Yojana, has done little for the farmers, who therefore continue to kill themselves by the bushel. According to RTI  information obtained by THE WIRE, just for Kharif 2018 insurance companies collected a premium of Rs. 20,747 crores; they have so far paid out only Rs. 7697 crore as claims, even though additional claims of Rs.5171 crores are pending with them. At best, therefore ( for the insurers) they will pocket Rs. 13050 crores, at worst Rs. 7880 crores. It doesn’t require a Niti Aayog to figure who are the real beneficiaries of this programme- last I heard, no insurance CEO had committed suicide. Outsourced insurance schemes like the Kisan Bima Yojana or Ayushman Bharat can at best be a supplement to the government’s efforts, they cannot be a substitute for creation of essential infrastructure and policies such as irrigation, MSPs, dismantelling of unnecessary regulatory mechanisms, provision of village level health facilities and medical staff.

It’s the same with all outsourcing by the government of its basic functions- education, public security, public health, transport, and in the days to come, the civil services too. We expect a government to deliver basic public goods, rather than farm it out to blood suckers because it cannot resolve its inefficiencies.This ever expanding outsourcing  policy is worse than a placebo- at least a placebo causes no harm but here people are becoming paupers, killing themselves or dying unsung three to a bed in some rat infested hospital because the govt. aspires to another Guinness record and a hero’s reception at that temple of doom, Davos.

One question remains, however: where does one outsource one’s conscience?