Objection by the ICC of MS Dhoni sporting the Army Special Forces badge, the winged dagger with the words ‘Balidan’ meaning ‘sacrifice’, on his wicket keeping gloves while playing at the ICC Cricket World Cup 2019 has been adhered to albeit after initial obstinacy by the BCCI and much politicizing of the issue. Dhoni was observed not using those gloves again during India’s second World Cup match with Australia on June 9. Dhoni’s initial action apparently was because of ignorance and lack of advice.

Why Dhoni was wrong in doing so, has been explained in these columns (https://hillpost.in/2019/06/army-special-forces-badge-on-dhonis-gloves/111740/), which should be perused. But for those not inclined, the part they would be interested in is summarized as under:-

But now a deliberate attempt is being made to deride the Army Special Forces Badge. Tejinder Pal Singh Bagga, a hitherto unknown businessman who has come into prominence after joining politics has advertised T-shirt with the Army Special Forces Badge under which the writing says “KEEP CALM & SUPPORT PARA SF”. This 34-year old businessman runs an online clothing line, named tshirtbhaiya.com, and is spokesperson of the Delhi Unit of Bhartiya Janta Party (BJP). Bagga’s move is obviously to make a fast buck in the immediate aftermath of the ICC objection to the emblem on Dhoni’s gloves. He does not mind the damage he is doing to the Special Forces fraternity, as long as theses T-shirts sell. 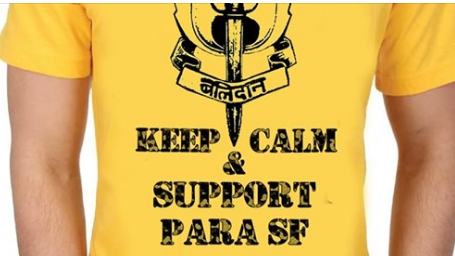 The use of the Army Special Force Badge on these T-shirts is a cheap gimmick, which in a manner amounts to sacrilege of a coveted Army symbol. The slogan “KEEP CALM & SUPPORT PARA SF” too is ridiculous. As veteran Major General S Pachory has potted on Twitter, “Preposterous! Whose support does the Para SF need? They are the elitist of the elite”. In his greed to make money, Bagga is trying to play on public sentiments for asking for support for the Special Forces. This false sense of nationalism is pathetic. Should Bagga be permitted to play his charade in this manner?

The cunning part of Bagga’s business ploy is clear from his post on Twitter that reads “On Special Demand of @MajorPoonia & thousands of friends we are launching this on Tuesday. You Can Prebook your order here. Rs 100 will be Donated from every T-shirt Sale to National Defence Fund”. The post is accompanied with photographs of the T-shirt (inset) in four colours. Bagga could have written on the T-shirts whatever he wanted without using the Army Special Forces Badge, which would have not hurt any sentiments.

Instead of the Army Special Forces Badge, Bagga could have depicted a soldier standing vigil in combat dress or firing a weapon if the motive really was patriotic and aimed at contributing to the National Defence Fund, which surely is not meant exclusively for the Special Forces. And why did Bagga specifically have to mention Poonia. As a medical officer, Poonia had a stint with a Special Forces unit over a decade and a half back. He was known to borrow T-shirts purchased by personnel abroad after training with foreign special forces, which he never returned. Whether this was because of love for T-shirts alone is not known but there is more which is not being mentioned here.

At the time when Aam Aadmi Party (AAP) was being formed, Poonia was frantically seeking donations for AAP to secure a ticket, but failed. So now Poonia has latched on to Bagga and through him perhaps to the BJP. There is nothing wrong in this because we are a democracy and citizens are free to join any political party. But if Poonia is prepared to deride the Army Special Forces Badge in this manner despite claiming to be a nationalist, he needs to be ostracized from the Special Forces fraternity, same way a minister in the last government has been ostracized by the Regiment of Grenadiers for public utterances not in interest of the military. Not that this matters to people who have already killed their conscience and are up for sale.

There is a viewpoint that the proposed T-shirts would make the public aware of Special Forces. However, after the publicity blitzkrieg of the ‘surgical strikes’ undertaken by Special Forces, the electronic and media coverage, public statements including during electioneering, operational clips, articles, TV debates, books, documentaries, second anniversary celebrations of ‘Surgical Strikes’ and Bollywood movie ‘Uri’, even the dumbest of the dumb in India are more than educated about Special Forces. On the contrary, it is the powers that be that need to discover what the Special Forces actually mean and how they should be used in this era of sub-conventional war. Hopefully, Bagga doesn’t aim to make lawmakers don these T-shirts and attend Parliament.

The BJP needs to take a pragmatic view of the issue. Sale of these T-shirts with the Army Special Forces Badge should be stopped, as it is a cheap gimmick that derides the sacredness of this Army badge. Tomorrow Bagga may start selling pyjamas with the Ashoka Lions Emblem. About time a line is drawn before India becomes a laughing stock.