Erstwhile Bengal was perhaps the most developed and affluent region in India under British rule till 1947. It had most of India’s engineering industry, multi-national companies of repute and was responsible for bulk of Indian exports that included jute, tea, textiles and shipping. The state boasted of India’s earliest engineering and medical colleges apart from other seats of higher learning. Is it any wonder that it produced some of the best minds India had seen in nineteenth and twentieth centuries like Raja Ram Mohan Roy, Sri Aurobindo, Ramakrishna, Swami Vivekanand, Ishwar Chandra Vidyasagar, Rabindranath Tagore, Bankim Chandra Chatterjee among a host of others? Be it in the field of social reforms, art and culture or education Bengal was always on the forefront and no other region in India could match it. But in last five decades the state has lost its pole position in Indian sub-continent and today it languishes close to the bottom among all large states in the country. The rich cultural heritage of Bengal built over centuries is now only part of history.

Politically West Bengal was a strong hold of Congress up to 1977 and then CPI (M) ruled the state till 2011 for nearly thirty-three years. In 2011 Mamata led TMC defeated them soundly and she continues to be in power for the second term currently. Most of state’s decline too took place in the years it was under communist rule. A lot was expected from Mamata and her party but they too seem to be travelling the CPI(M) route as the state has hardly witnessed any change for the better. The only change under TMC is the change in demography of the state where Muslim refugees from Bangladesh and Rohingyas from Burma have found a state government that is willing to rehabilitate them without any questions asked. The reason is limited to vote bank politics as TMC has openly courted Muslim community in the state, at times at the cost of majority Hindus.

BJP could never make its presence felt in the state and hardly ever had any representation from there in the national parliament. But with current BJP leadership in last five years things have changed. After successfully making deep inroads in nearly all North Eastern states, its focus is now on West Bengal. In 2016 state elections BJP did gain a healthy vote share that seems to have ruffled Mamata Didi’s heckles. Buoyed by the success, BJP is now looking at gaining an upper hand in the state in the current national elections. Without a doubt the most important poll issue is the changing demography of the state and TMC government’s unbridled support for Muslim refugees. This obviously strikes a chord with state’s Hindu population that as per 2011 census was as high as 70.5% while Muslims were 27%. The current figures would be marginally different in view of the large refugee influx and higher growth rate among Muslims. In 2011 three districts in the state had majority Muslim population. So, it is hardly any surprise that this has become a major poll issue in 2019.

Wary of BJP’s growth in the state, the Chief Minister has been on a path of confrontation with central government, cost to the state notwithstanding. It must also be noted that if BJP continues to rule at the centre, Mamata Didi’s national ambitions too would not materialize. Given India’s federal structure and centre vs state relations, it is incumbent for state’s Chief Minister to maintain a good working relationship with central government. The Chief Minister cannot let the state suffer because of his or her personal ego or animosity with central leadership. Mamata has failed in this regard as she has placed her persona above the state. Her reaction to aid offered by centre when the state was hit by a cyclone recently, amply substantiates this point. 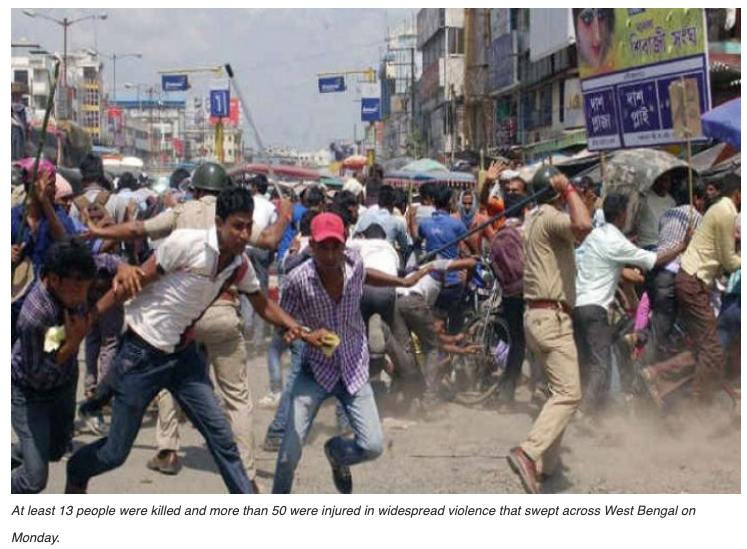 West Bengal today is ruled by a ‘goon culture’ that was perfected by CPI (M). This culture relies on instilling fear, coercion and violence against common man. Under TMC it was expected that this would reduce but it was not to be. A large part of these goons from CPI(M) changed loyalties and are today part of TMC. So, the public continues to live under this culture unabated. State government courts these goons by paying them money from state resources in various dubious forms. Party leaders cultivate these goons to secure their vote banks. Last panchayat elections in the state were a prime example of how this goon culture works and Supreme Court of India came down heavily on the state administration for their failure to check violence and intimidation. Local police and other authorities turn a blind eye on excesses committed by these goons since they enjoy political patronage. As things stand today no political party can hope to succeed in the state unless it embraces this culture.

To that extent it will be logical to believe that BJP too would have adopted some of this goon culture to counter TMC. Given this situation, it is no brainer that the state is witnessing continual violence and rioting during the ongoing elections. The intensity is possibly higher because TMC is feeling threatened and therefore fighting BJP at each step. The state is not used to seeing any other party, baring CPI(M) and TMC, on the streets for over four decades now. So, the saffron surge is certainly like a red herring for TMC’s workers and their leadership. As far as BJP is concerned, it knows it has momentum on its side and therefore would like to go for the kill. This obviously makes the situation more tense and explosive. It does appear that Mamata has lost her poise and rationality. Her last speech before electioneering closed in the state on 16 May 2019 is a testimony to this effect. Politicians, as a rule, will needle each other and leaders who lose their sense of balance because of this do not deserve to be leaders.

TMC exploits the minority card fully by instigating state’s Muslim population against BJP and the perceived threat from spread of Hindutva. Mamata has openly snubbed the Prime Minister and expressed her distrust for central police forces deployed in the state for election duties. She has passed all kinds of derogatory remarks against central organizations like CBI and Election Commission. State’s local police are openly partisan in their approach and that gives a license to TMC goons to perpetuate violence and arson without any fear. She has put the fear of God in all government functionaries in the state and today, right or wrong, nobody dares to go against her wishes. She wants to project herself as a champion of Bengal and a strong leader who can stand up to Mr. Modi. Her dictatorial and autocratic ways are there for all to see. The irony is that she decries these very attributes in Mr. Modi. In this no holds barred fight to stop BJP from gaining ground in the state, the only losers are the people of the state.

Meanwhile it is pity that a state that had everything going in 1947 is today a troubled state in more ways than one. Has Mamata Banerjee lost her focus on what is good for the state in her fixation to fight Mr. Modi and centre? Has her over the top appeasement of Muslims in the state turned the majority against her? It is a forgone conclusion that BJP will increase its vote share in West Bengal in 2019 elections. The moot question however is whether this increase will result in more parliamentary seats for the party. If that happens them TMC would be a very worried party in next state elections due in 2021. It is time Mamata understands that nothing is permanent in this world and more so in politics. The question that every politician of her stature must ask himself or herself is– what kind of legacy am I leaving for my state and its people after a decade of being on top? In her case the answer is indeed very frightening and hardly flattering for someone who sees herself as champion of the people of Bengal.