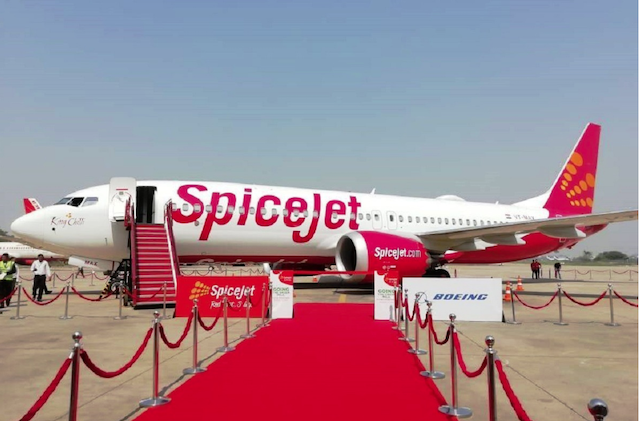 Dharamshala: “On its inaugural Jaipur – Kangra flight, a 90 seater Spice Jet airline on Sunday morning landed at Kangra Airport with full passenger capacity. The flight took off from Jaipur International Airport . It shall be a daily non stop flight between the two cities. A helicopter tourist service  is also being  started  between  Dharamshala –Chandigarh and Dharamshala- Shimla from here within next 6-7 days, which will be an added feat in air travel from here ,” said Kishor Kumar Sharma in-charge of Kangra Airport.

Kishor  Sharma said that it was a healthy sign that the inaugural flight  of  Kangra – Jaipur was having  full passenger load. The Kangra Airport is also the airport that serves the tourist township Dharamshala, where the Dalai Lama and the Tibetan Government in Exile also is based

The  aircraft  today took off from  Jaipur International Airport JAI at  6:05 AM and  reached  Dharamshala Airport DHM at 7:35 AM and left for Jaipur from Kangra at around 11.40 am and after an hour 25-minute journey time, the aircraft landed at Jaipur at 13.25 pm, the fare for this trip has been fixed at Rs. 3645 per passenger a side.

With the commencement of this service, the number of aircraft coming to Kangra  Airport will increase to  four. At the moment three aircrafts are landing daily that cater to air services between Kangra and Delhi.   Air India is flying twice while Spice Jet once a day between Kangra and Delhi.  This shall be the first flight connecting any Himachal city  to a new destination, other than  Delhi.

Sanjeev Gandhi, Secretary Dharamshala Hotel Association said, “this daily air link between two most loved tourist cities of India shall boost the hoteliers business in Dharamshala . If some airline company starts a direct or connecting flight to Mumbai from Dharamshala, it will be a boon for the national/ international tourists. Dharamsala- Chandigarh air link is also a burning necessity of the time.”