Dharamshala: Actor Ranveer Singh is in the process of “becoming the hurricane” under the training of iconic cricketer Kapil Dev in HPCA cricket stadium Dharamshala  for the upcoming film ’83’, a Bollywood entertainer on India’s historical 1983 Cricket World Cup win. Presented by Reliance Entertainment, ’83’ is directed by Kabir Khan, and will see Ranveer Singh playing Kapil. All the actors for this film are here since Wednesday.

Ranveer is stepping into the shoes of former Indian cricket team captain Kapil Dev. Ranveer on Saturday tweeted a photograph of himself along with Dev. The two in  the Indian cricket team’s blue jersey , seen talking to each other. The actor has began Cricketing training for the film in Dharamshala, Himachal Pradesh. 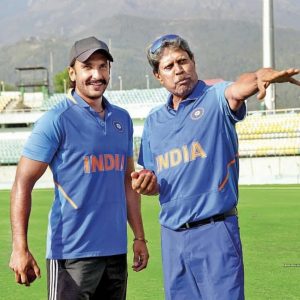 Sources say that the  shooting of Ranveer Singh’s 83, directed by Kabir Khan, will commence in May in London  and shall be completed in 100days . Madhu Mantena and Vishnu Induri are producing the film in association with Reliance Entertainment.

The movie 83 is about the 1983 World Cup .’83’ follows how, under newly-appointed captain Kapil Dev, the Indian cricket team defeated West Indies in the final of the World Cup in 1983. It tracks the coming-of-age of not just a cricketing team but of a young nation in the eyes of the world.