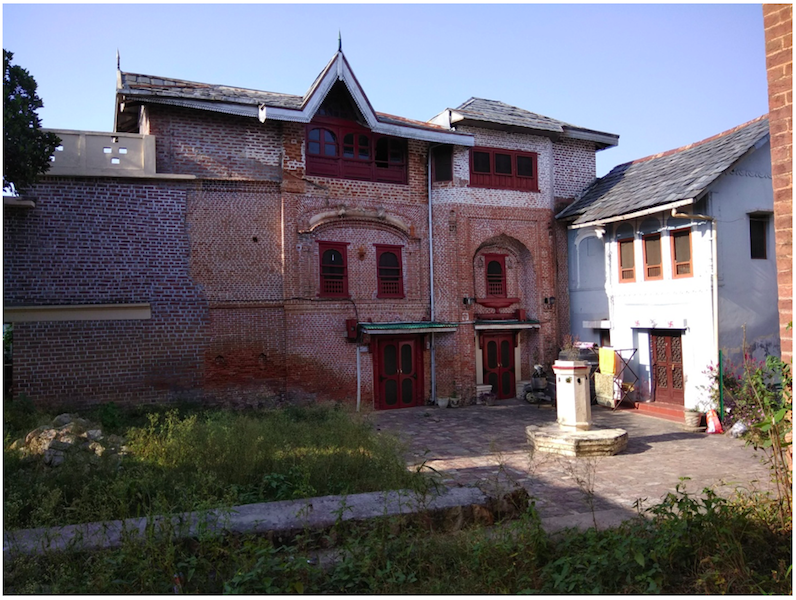 An old building in the picturesque heritage village of Pragpur

Lying amidst the peaceful foothills of the Kangra Valley against the stunning backdrop of the Dhauladhar mountains, lies the tiny hamlet of Pragpur. Pragpur is full of many quaint little meandering walks and meadows. A short walk from the property is a huge village tank whose water comes from an underground spring. The town also offers a treasure trove for shopping enthusiasts. There are skilled silversmiths where one can buy pretty handmade trinkets, cloth shops that sell material, local tailors who stitch them into dresses in no time and weavers who knit hand woven blankets and shawls. One can also buy wool and other local handcrafted products in the market. Recognizing that its unspoiled area could contribute to rural heritage tourism, in December 1997, the Government of Himachal Pradesh notified Pragpur as India’s first heritage village. 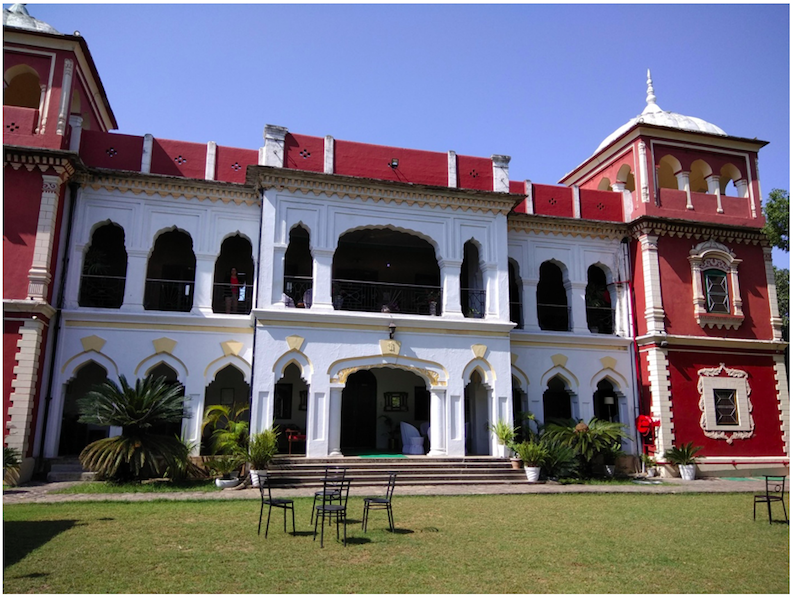 The main highlight of this quiet village and the only place to stay here is the charming Judge’s Court, the country’s first heritage country manor. Currently it has a total of 30 well-lit, spacious rooms, including two new ones. This 101 year old ancestral home built in Anglo-Indian architecture consists of 12 acres of greens and reeks of old world charm. Walking in, one notices a petite plunge pool at the entrance. Family pictures and old mirrors adorn all the walls in the corridors. In the lounge area, there is a huge bookshelf lined with a ton of books—a paradise for any book lover. 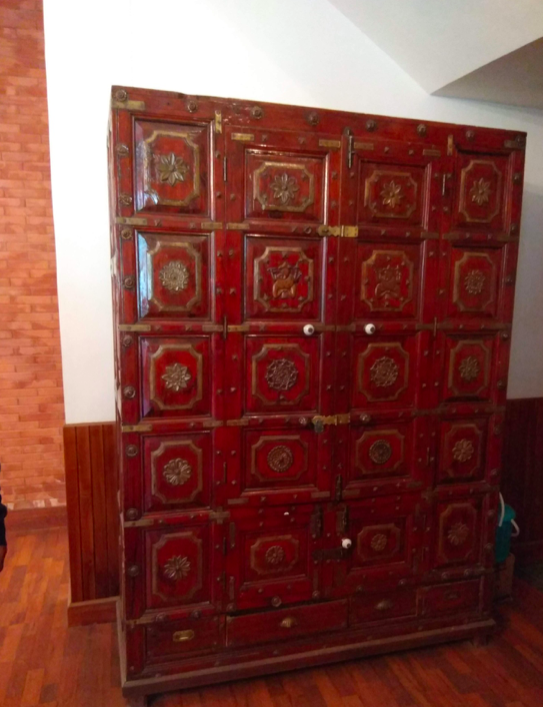 An antique wooden cupboard that was handcrafted in 1932

The owners, Vijai and Rani Lal, spend about six months a year here on an average; the rest of the year they live in Delhi. Vijai walks us through the property and tells us that the cattle shed at the entrance has been there since the very beginning. In the living room, he points out a huge antique wooden cupboard that was handcrafted in 1932. I notice the old triangular opening doors that leave no gap and make no sound, and are especially useful in the monsoon season. Rani tells us that some of the old furniture—like cupboards, doors, cabinets and mantelpieces—have been designed and replicated into new ones by a local carpenter from Pragpur using local wood from the mango trees. 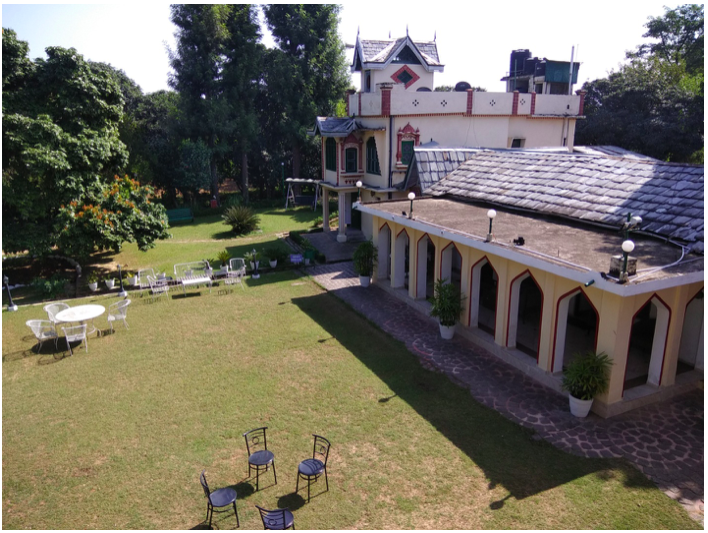 An aerial shot of the central lawn of the property

Vijai then sits us down in the outdoor area overlooking a huge lawn. He serves us each a tangy, citrusy chakotra (pomelo) plucked straight from one of the trees, and begins to proudly tell us about the intriguing story of this regal manor. The building had been made for Vijai Lal’s grandfather, Rai Bahadur Jai Lal, for his eldest daughter’s wedding, which took place in 1918. In 1922, Rai Bahadur Jai Lal was elevated to the High Court of Lahore as a Judge. Since then, when the court would close for 15 days in the winter, he would come to Pragpur; and in the summer when the court would close for two months, he would go to Shimla which was cooler. 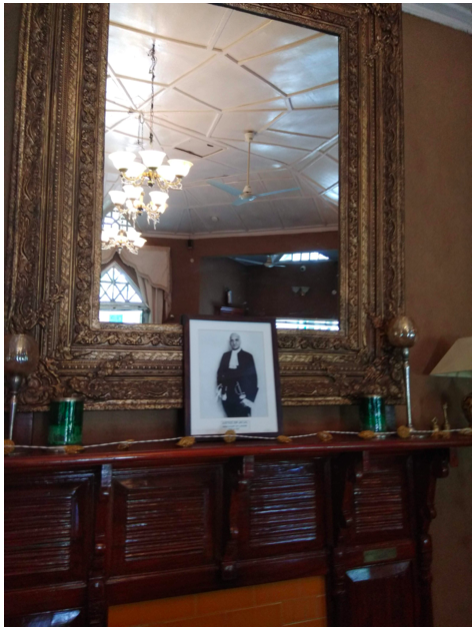 A portrait of Rai Bahadur Jai Lal on a mantelpiece

Soon, the house became a winter holiday home for the family. But there was no proper electricity and plumbing in place. The judge’s sons—one of whom was educated at the Manchester College of Technology, the second one a barrister from Cambridge and the third who studied technology in Berlin—began visiting Pragpur in their winter holidays “with their guns and dogs”. They would spend just about a week in all, but would claim “exigencies of work” and would go back leaving their wives behind “on sufferance”. During the 1920s–1930s, the family would be thoroughly spoiled with an army of people cleaning, washing and cooking for them. 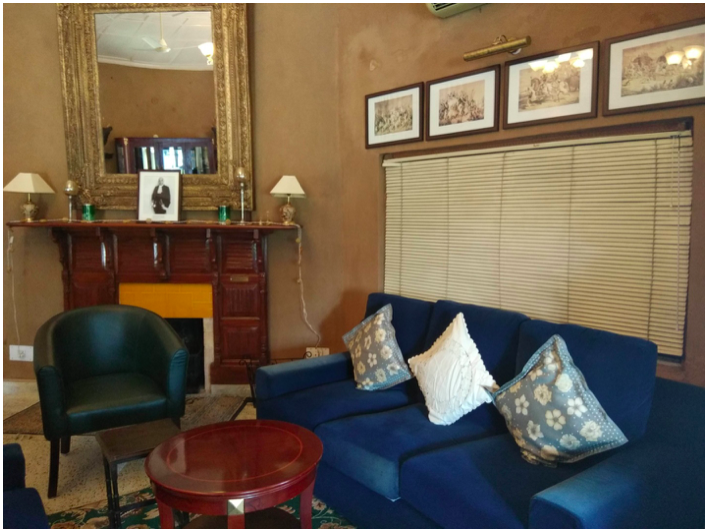 One of the lounges

In 1954, Rai Bahadur Jai Lal passed away, and the three brothers inherited this white elephant. For a while, the house was used for as a teacher’s training centre for a girls’ hospital. Not knowing what to do with it, the brothers offered it to the government of Punjab to take over. The government wanted to make it into an industrial training institute. The eldest son, being an engineer, was delighted. But the government asked them to pay Rs 20,000 for equipment, which was a lot of money in those days. The brothers put their heads together, and declined to pay the amount. Thus, the building never ended up going to the government, and continued to remain with the family. 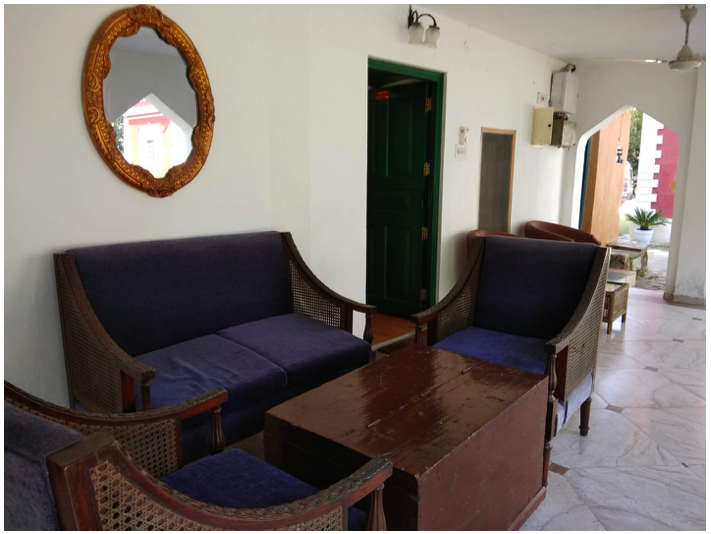 One of the outdoor corridors

When Vijai Lal and his wife came here for the first time, they found that the doors were all locked. They needed to spray DDT on all the windows and curtains, and take down all the carpets. It took three full days to open, air and dust the entire house. Gradually, they began to spend more time in Pragpur, while leaving their fancy 14-bedroom home in Delhi—despite there being no electricity, proper toilets, and most of all, friends in Pragpur. 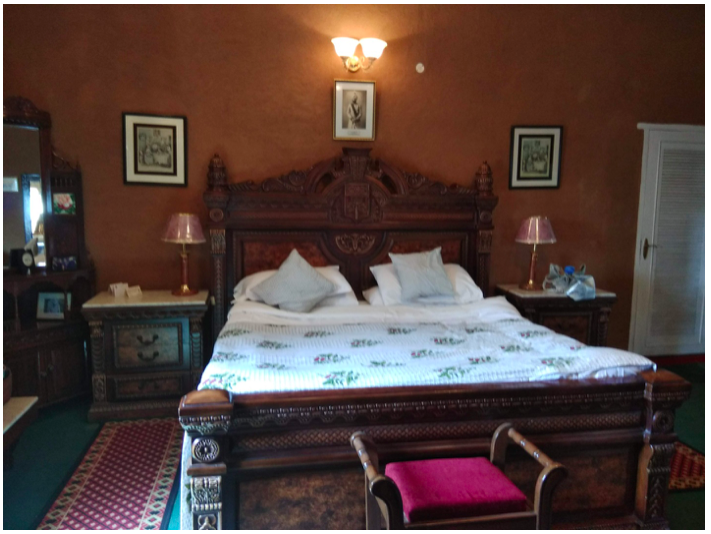 One of the rooms

They began restoring the place by first building toilets and fixing the electricity. Once, a German lady, Ben Kempa who ran a travel agency, visited the property. When she saw the place, she couldn’t believe her eyes, and exclaimed, “I have seen the best of India!” Kempa coaxed the couple to open a few rooms. And so encouraged, in 1997 with just two rooms, the Judge’s Court started running as a hotel. It ran independently for a while before they roped in the WelcomHeritage group of hotels to market it. 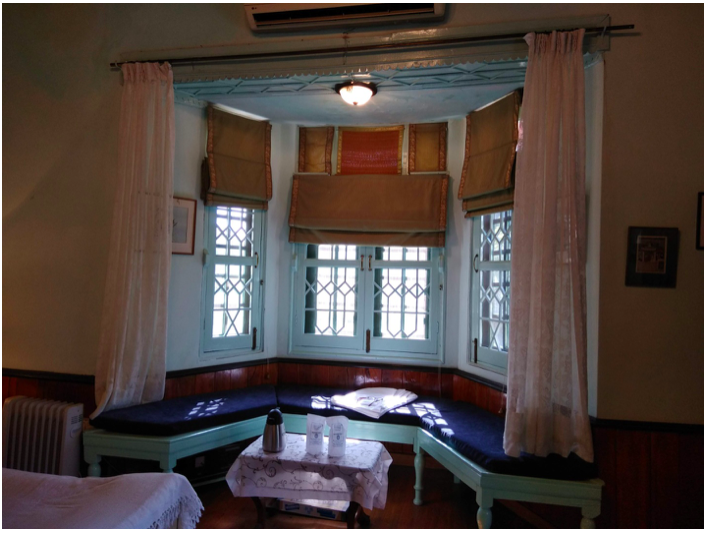 The architecture of the property is stunning, and has expanded gradually over the years. Vijai tells us that the main building including the reception was made in the years from 1914 to 1918. Thirty years later, the staff quarter and kitchen area was built. The dining room has a buffet area with a fireplace, making it cosy in the winter months. The pantry occupies a huge space, and is known for serving some of the finest Continental food. The raw material for all the food is sourced from Delhi.

Last year, a new wing called the ‘Chambers’—having a dining area and six rooms with adjoining balconies—was created. Going with the colonial character of the place, the rooms are named after well recognized Englishmen from British India such as Clive, Mountbatten, Irwin, Curzon and Dalhousie. Each room has some or the other board game in them, such as Chess, Scrabble or Ludo. One of the rooms is a penthouse on the terrace, which comes with its own private party area. There’s also a fancy bar, which is made of mud and cow dung with a mosaic floor, and pompously displays a portrait of Rai Bahadur Jai Lal.

In the evening, the hotel is brightly lit with coloured lights and lamps, and a bonfire is organized for guests in the centre courtyard. Under the camphor tree in the open courtyard, you look up at the starlit sky as a local flautist casts his spell by magically belting out one melodious pahari tune after another. 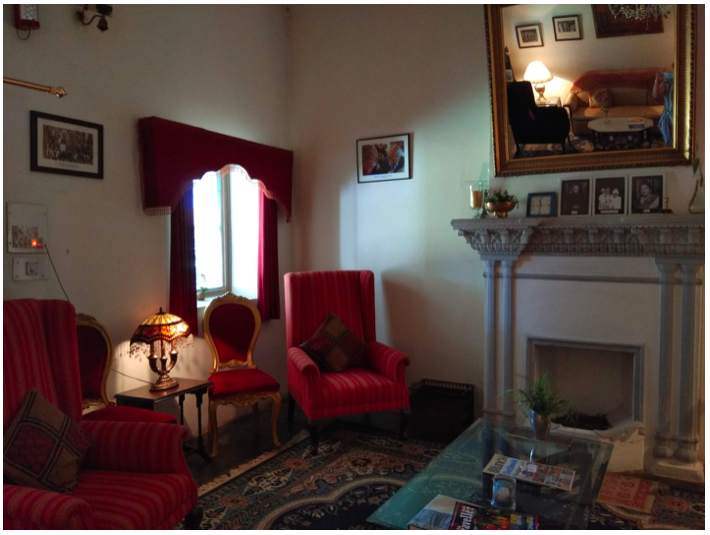 Over the years, the couple has continued to reinvent and revamp the property, making new additions and undertaking renovations in it and from time to time. They now also make their own preserves, pickles and jams from the dozens of homegrown litchi, plum, mango, grapefruit, peach, orange, clove, cardamom and galgal (hill lemon) trees that grow in the premises.

Visiting the Judge’s Court in Pragpur was like truly witnessing a living example of history and peeking into a bygone era!

Neha Kirpal is the author of "Wanderlust for the Soul", a collection of short stories based on travel in different parts of the world. She has worked in the print, electronic and online media, and currently freelances for various publications. Her hobbies include reading, writing, travelling, listening to music and watching movies.