The Foundation Stone of Arun-3 Hydro Electric Project was laid by Prime Minister Narendra Modi and KP Sharma Oli, Prime Minister of Nepal, on May 11, 2018. 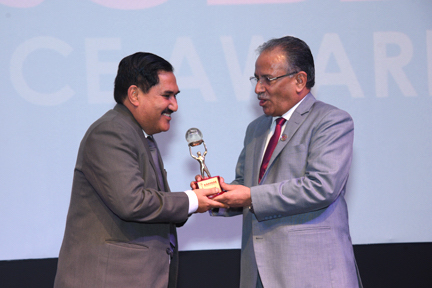 The award was presented during Karobar Economic Conclave-2018. The opening ceremony of the Conclave was presided over by the Prime Minister Oli. The conclave also was attended by Mr Yuba Raj Khatiwada, Finance Minister of Nepal, well known Industrialists, Bureaucrats and Politicians from Nepal

Congratulating the SAPDC team, Mr Nand Lal Sharma, Chairman & Managing Director of SJVN said that the Arun-3 project is a peaking run-of-river project, located on the Arun River in Sankhuwasabha District of Province 1 in Eastern Nepal.

This is an export-oriented project with a generation capacity of 900 MW.  The height of Dam will be 70 metres while the Head Race Tunnel will be 11.7 kilometre long. The Power House of the project will be an underground one that will have have 4 Vertical Francis Turbines of 225 MW each. Arun-3 project has the potential to generate 4018.87 million units of electricity every year. The project also involves erection of 217 kilometre long 400 KV Double Circuit Transmission Line up to Nepal-India Border.

NL Sharma also informed that the project was awarded to SJVN Limited on build-own-operate-transfer (BOOT) basis for a period of 30 years. The total project cost is likely to be INR 7000 crores (NPR 11,200 crores), which includes both for generation and transmission.

The project will be an important milestone in the history of SJVN Limited, said Sharma. The government power company is already is operating four power projects in the country with a total capacity of more than 2000 MW.

On Friday, SJVN was conferred the Rajbhasha  Kriti Award for effective implementation of official language policy for the year 2017-18.

The award was presented by Venkaiah Naidu, vice-president and for SJVN  was received by NL Sharma, CMD of SJVN at a function held on the occasion of Hindi Diwas at Vigyan Bhawan, Delhi