Falsehood always has the initial advantage over Truth: as someone said, the Lie was up and running even as Truth was still tying its boot laces.

Rolls Royce, I learn, not only has a patent on the iconic car but also imposes a condition on the buyer – if at any time it finds that the car is not being properly maintained it has the right to repossess it. The idea is that the image of the brand should not be sullied in any way. It is now apparent that the BJP-RSS combine believes it has a somewhat similar patent/right on Hinduism. Only this conglomerate (it has more funds than most companies in India, in any case) has the right to decide the design and shape of Hinduism, the persons who can practice it, the form and substance of such practice, and the right to condemn unapproved practitioners as heretics and frauds. Competition from other brands is to be ruthlessly squashed.

Nothing else can explain its pathological obsession with Rahul Gandhi’s assertion of his Hindu credentials and the millions of bytes expended on his “janau” (the sacred string), visits to temples, his claim that he is a “shiv bhakt”. Why should this get the wind up perennially flatulent BJP spokespersons? Surely a person – dynast, outcast or iconoclast – has the right to assert his religiosity or even flaunt it during election time? After all, the BJP itself invented this game. The BJP’s paranoia with Rahul Gandhi’s religion, however, plumbed new depths with its epileptic responses to the former’s recent Kailash Mansarovar yatra. There appeared to be an air of panic about it, as if he had invaded their citadel. Which, in a manner of speaking, he had.

Now, I am no great fan of Mr. Gandhi and I do believe that he occasionally does the stupidest things. Like posting the screen shot of his Fitbit to prove that he took 46000 steps on a single day on the yatra; this was to justify his claim that he completed the parikrama in just one day. This is an impossible claim, in the same class as Mr. Modi’s 56 inch chest boast which even had the Great Khali trembling. The Fitbit claim was quite unnecessary and therefore naturally attracted derisive remarks on social media. Sample: the Fitbit was put on a donkey which did the parikrama. For the simple fact is that the parikrama of the Kailash is about 53 kms. over mountainous terrain, involving an ascent of 1000 meters to boot, and it would stretch the stamina of even an Iron Man athlete to do it in one day. It takes three days, provided you don’t cheat. My wife and sister-in-law have just returned from there, therefore I have this information at first hand. 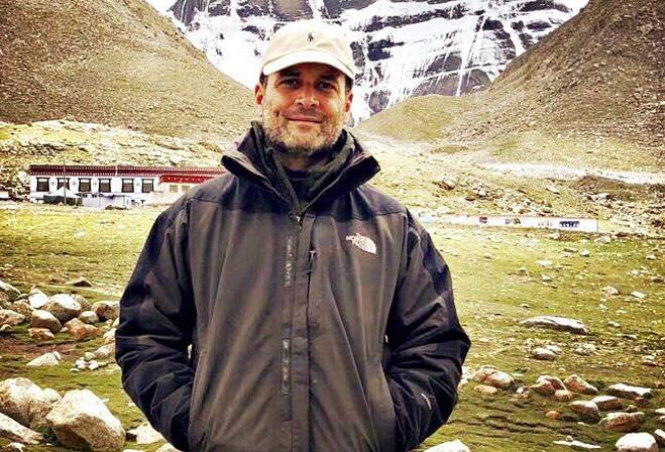 But this simply betrays Mr. Gandhi’s impetuosity and lack of maturity, not his lack of religiosity or an ersatz Hinduism, as the BJP has been tub-thumping. The yatra was a private affair and at no point did the Gandhi scion flaunt it as proof of his Hindu faith, or try to lend it a political colour. His initial photos on social media were also mainly about the landscape, not himself. It was only after the BJP commenced its rabid and wholly uncalled for attacks on him and started questioning the fact of the yatra itself – whether in fact he performed the journey at all, alleging that it was simply photo-op Hinduism – that he released pics of himself and his group. One erudite Union Minister, who has done his post graduation in scatology, even analysed the shadow of a walking stick in a photo to announce that it was morphed! One is, therefore, forced to conclude that the BJP will not share Hinduism with anyone else – a kind of religious oligopoly, as it were. And certainly not with the Rahul Gandhi.

But there is more to it than just that. It is also a calculated, long-term strategy with three pincers. The first, of course, is to establish absolute hegemony over the Hindu religion- they are its sole promoters, protectors and arbiters. The second stems from its unapologetic policy of religious division of the country (read voters). However, one of the occupational hazards of dividing an electorate as complex as India’s is that you have to hang on to your share of the divided spoils for dear life and not allow anyone else to encroach on it. Even more so if in 2014 you managed to garner only 31% of the popular vote even though everything was loaded in your favour. For the BJP this means that, having spurned the Muslim and minority vote, now banking exclusively on the Hindu vote for 2019, it cannot allow the Congress any traction in attracting the Hindus (albeit the more moderate and rational ones among them). Hence its constant endeavour to paint the Congress as a Muslim loving party – the second pincer – and deny it any Hindu space. It has been doing this relentlessly, without let up, for the last couple of years, its message amplified by a mostly spineless mainstream media, with some success. Falsehood always has the initial advantage over Truth: as someone said, the Lie was up and running even as Truth was still tying its boot laces.

The third part of the strategy is to demolish Rahul Gandhi’s personal Hindu faith and his political secularism, not just in the eyes of the electorate but, equally important, in the eyes of the other Opposition parties. None of them want to alienate the 80% Hindu vote, the Samajwadi Party’s downfall in UP still fresh in their minds. Rahul Gandhi is nothing by himself but he can be a force multiplier. If he can coalesce the others into a critical mass, that can spell trouble for the BJP. The personal attacks on him, therefore, are part of the larger strategy to discredit him as a Hindu, to turn him into a religious leper, a political untouchable no other party will want to associate with. It may work, it may not. But if it does then we shall have new gate-keepers for the Hindu faith in our country, who shall henceforth issue the bona fide Hindu certificates. What a comedown it shall be for the land of the Shankaracharyas and rishis! Did the poet foresee this?-