Dharamshala: In the bus accident on Wednesday at Luna, in Chamba district, the number of dead has gone up to three. According to Police another person, who was seriously injured in this accident, died today in Tanda Medical College Hospital, during treatment? The deceased has been identified as Chatro Ram (82), a resident of Jawali. 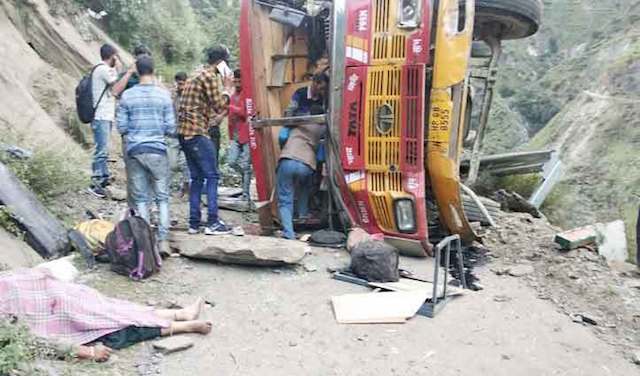 Earlier two persons were killed while 21 others injured when a private bus overturned at Luna, near Chhatrari, Chamba, on Wednesday. There were 48 passengers in the bus when the accident took place. Chamba SP Monika Bhutungru said the deceased were identified as Mrs Kaushalya (50), a resident of Kuhar village in Bharmour and Makholi Ram (65), a resident of Padhar village in Chamba district. The injured were taken to Government Medical College and Hospital, Chamba, said the SP. Later few of them shifted to Tanda, police added.

The private bus was on its way to Chhatrari in Chamba district from Palampur in Kangra when it met with the accident yesterday.