Reciprocity is a sine-qua-non for a successful hug, and we didn't see much of that from the Prime Minister- in fact, if looks could kill Mr. Gandhi would have been instantly cast in stone.

It’s been a while since I did any hugging, primarily because the Leader of MY house ( she is also the Speaker, in a clear conflict of interest position) looks askance at this display of puppyism. She is of the firm view  she comes from a matriarchal family) that hugging is just another perk that went out of the window with my retirement, like the cantilevered lady PA, the flagged car and the Diwali gifts. Outside the home my hugging instincts are similarly constrained by Sections 377 and 397 of the IPC. But I can still recognise a good hug when I see one, and the one that Rahul Gandhi gave Mr. Modi the other day took the cake and the fruit cream. There are, experts of the art tell me, nine different types of hugs not including the Huggies of Proctor and Gamble. Rahul Gandhi’s hug was a blend of the Bear hug and the Standstill hug- the former doesn’t allow the huggee to escape, while the latter evokes no reciprocal reaction from the object of the attention.

Most prime time panelists familiar with the bear pit that our Parliament has become agree that both factors- inability to escape the hug and lack of reciprocity-are matters of some concern. The SPG has to do some hard strategising instead of just walking the ramp every time our fashionista PM steps out. It’s all very well to have an inner circle, a proximate security and an outer perimeter for the PM’s security, but of what avail is it if someone can just walk up to him and hug him ? Definitely not something to be winked at, if you ask me. Mr. Modi is followed by 20 million people on Twitter who adore him – what if even 0.1% of them, overcome with nationalistic fervour, decided that they would like to give him the Buddy hug or the Pampered hug ? What if Rahul Gandhi did it again in the winter session, this time coming from behind with the Back hug or, God forbid, the Ambush hug? No, sir, we need another circle around the PM; we could call it the HUGGLE – the Hug circle, manned by no-nonsense types more comfortable with a Huh? than a hug. 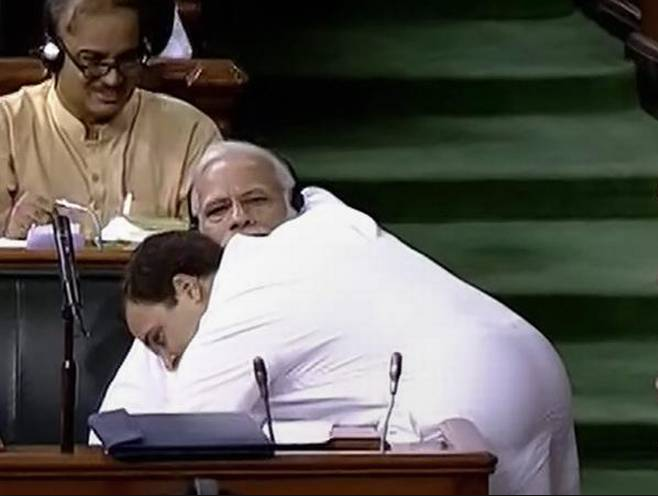 Reciprocity is a sine-qua-non for a successful hug, and we didn’t see much of that from the Prime Minister- in fact, if looks could kill Mr. Gandhi would have been instantly cast in stone. But frankly, I don’t think he was expecting any reciprocal cleaving to the bosom by the PM, for it is well known that Mr. Modi never, but never, hugs an Indian: his expansive embraces are reserved for foreign dignitaries, preferably on foreign soil, presumably because he has no equal in this country. There’s also the Yoga factor to be kept in mind by anyone who has the urge to hug a Sangh pariwar type; they can, in an instant, turn the tables on you, just as they can turn history on its head, what with their training in lathi wielding shakhas every morning. Mr. Gandhi, who is a Shiv bhakta, would therefore be well advised to acquire some of those Shaivite powers before he next applies the Cuddle hug on the Prime Minister.

Indian history, both ancient and recent, have recorded hugs of some note in the past. There was the to- die- for hug that Shivaji is reported to have given the Muslim warlord Afzal Khan at Pratapgarh in 1659. It ended, of course, with the latter being disembowelled, which explains perhaps the look of alarm on the face of Mr. Modi (who is very well versed in Indian history, as we all know) when Mr. Gandhi made his approach the other day. In his defence, however, it must be said that he could have mistaken Mr. Gandhi for a Shivaji bhakta instead of a Shiv bhakta. It can happen when you have too many gods in your pantheon and mix up your history. Then there was the famous hug that Mr. I.K. Gujral bestowed on Saddam Hussein in Baghdad in 1990. It attracted a lot of mis-informed criticism at the time but it ensured that 300,000 stranded Indians were able to come back safely from that war ravaged land. For me it was a diplomatic master stroke and only a man of stature and compassion could have done it. Most recent, of course, was the alleged Tarun Tejpal hug on a lady inside a hotel lift in Goa: when the lift doors opened so did a can of worms for Mr. Tejpal. As Confucius said: “Man who hug lady in lift reach bottom very soon.” You can interpret that whichever way you would like to: my Chinese is not very good.

Coming back to the good old huggy time in Parliament, however. Maybe, just maybe, Rahul Gandhi may have resurrected the Gandhigiri of his famous namesake, and changed the course of Indian politics forever. Perhaps we shall now have a “Hug in India” campaign to replace the “Make in India but Park in Panama” campaign which appears to have yielded dividends for only a few. Maybe now in the run up to 2019 we will not see mugging, killing and sueing but hugging, billing and cooing. Maybe our politicians can bury the hatchet somewhere else than in each others’ backs. Maybe Mr. Amit Shah will take a cue from all this and lumber off to Kolkatta and hug Mamta Banerjee, or Subramaniam Swamy will embrace Sashi Tharoor, thesaurus and all, or Digvijay Singh will grasp vanprastha which has been crying out for him for some time now. It is not beyond the realm of possibility that one day soon Mr. Kejriwal could walk up to his Chief Secretary and, instead of slapping him, give him a good old anarchic hug! Everybody else, of course, would be hugging Sunny Leone. She could even be made brand Ambassador for the new campaign, scoring a win over Hard Kaur who I believe is the Akalis’ choice precisely because she is more hard core. The possibilities are mind boggling. Why not try it out ? As the Beatles sang: Give love a chance.