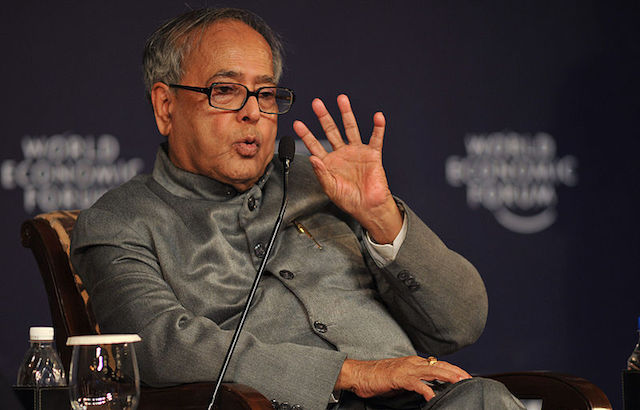 All hail to the little big man from South Block! What Mr. Pranab Mukherjee delivered on the evening of the 7th. of June at Nagpur was nothing less than a haymaker that floored not only the pugilists in the ring but also the experts sitting ring side. For the last fortnight we had been given an overdose of puerile thinking by the Congress, BJP, RSS, eminent “analysts” and, of course, the scavengers of the savannas – the electronic media – on his acceptance of an invitation by the RSS to be the chief guest at their annual function. While the former President himself maintained a dignified silence in the face of extreme provocation, the others regurgitated all their foul vapours every day: it was a betrayal of the party that gave him everything (except the Prime Ministership, of course), it was back stabbing the ideology of Nehru and the Mahatma, it was a conspiracy by a bitter politician, it was an endorsement of the RSS ideology, it proved that the Hindutva route was the only acceptable path for the nation, it was an attempt to embarrass the Congress, it was a ploy to become the Prime Minister in 2019. Every time I feel our politics and our journalism cannot sink any lower I end up being surprised.

Only a true patriot, a sincere Constitutionalist and an unbiased scholar of the country’s history could have done what Mr. Mukherjee did. That he is also a politician makes it even more unusual, given the depths to which our polity has sunk. Anyone can sermonise from a pulpit to the faithful. It takes extraordinary courage, however, to quote scripture to the devil in his own kingdom, to beard the lion in his own den. This is what Pranabda did at the “passing out” function of the RSS cadets in the RSS headquarters, politely but firmly demolishing the very “raison-d-etre” for its existence. His insistence on secularism, the ” composite culture” of the nation and the values of the Constitution as the only framework on which India could be built, was nothing but a slap on the face of his surprised hosts. His definition of patriotism and nationalism was the very antithesis of the unitarian concept of the RSS. He preceded this with an erudite exposition of India’s history and reminded the RSS of the obvious: that the country was an assimilation of all who came and stayed here- Caucasians, Dravidians, Muslims and even Mongoloids- and the country belonged to all of them. He reiterated a point made also by Ramchandra Guha in his book “India after Gandhi”- that India’s nationhood is unique in the world. Whereas all other nations are built on a common language, religion or ethnicity India is the only nation built on the fusion of hundreds of languages, six major religions and multiple ethnic groups. Any attempt to reduce this glorious diversity to a mono – culture based on one religion or language would destroy the nation. His message could not have been louder. It does not matter whether the RSS or BJP or their splinter groups would heed it, the important thing is that the nation has heard it.

If the RSS was calculating that the invitation to the former President was a marketing coup that would legitimise their ideology, they must now be very embarrassed at all the egg on their face. It was their own publicity over-drive (and the Congress reaction) that riveted the country’s attention to the address of Mr. Mukherjee and has given it so much penetration. No other platform – not a dysfunctional Parliament, or a University convocation, or a vulgar political rally, or an interview on one of our untrustworthy TV channels – could have garnered the kind of attention that the address did. Now the whole country knows what a former President, highly respected and with 50 years’ worth of political experience, thinks of the ideology that has taken the nation in its writhing coils. The RSS has outsmarted itself.

But the Congress too has no reason to be pleased at the discomfiture of the RSS, for it too has behaved abominably. Its pettiness, lack of respect for an elder statesman (and an ex-President, to boot!), it s paranoic distrust of anyone who is not an ordained Gandhi, and total bankruptcy of any higher values was on full display in the manner it attributed motives to Mr. Mukherjee, practically dubbed him a Judas, and questioned his ideological integrity. It is so blinded by its antipathy to the BJP-RSS combine that it has forgotten the first rule of a democracy – engage with all shades of opinion. It is now praising the ex-President for “holding up a mirror” to the RSS in a blatantly hypocritical volte-face. It should instead be eating humble pie and some of its senior members like Anand Sharma and Manish Tewari should lose no time in apologising to Pranabda.
What can one say about our electronic media which plumbs new depths of predatory avarice and discourteous arrogance every day ? Their speculative conspiracy theories – that Mr. Mukherjee was positioning himself as a compromise/consensus candidate for Prime Ministership in 2019, that he was taking revenge on the Gandhis for depriving him of the post in 1984 and again in 2004 – without a shred of evidence, can only make one agree wholeheartedly with Oscar Wilde: ” By giving us the opinions of the uneducated, journalism keeps us in touch with the ignorance of the community.”

And finally, there is a message in Mr. Mukherjee’s address for all the politicians in this country: engage with each other, improve the level of public discourse, stop spreading hatred and intolerance, be civilised even in your disagreements. For a man who is practically walking into the sunset, the former President has done his duty by speaking out and reminding the nation of the founding values and principles that once made this country great. We need look for no other motive. Instead we should listen to what he said, for, as T.S.Eliot said: ” Last year’s words belong to last year’s language. And next year’s words await another voice.” We have heard the next year’s voice. Is anyone listening?