In all probability the decision of BJP to withdraw support would be seen as a positive step. It is so because PDP is considered as a pro separatist party that plays a double game – it milks India but bats for separatists.

The wait is finally over and BJP has finally broken off with Peoples Democratic Party (PDP) in Jammu & Kashmir (J & K) after more than three years of an unholy alliance where the partners had nothing in common. On one hand PDP has always been pro separatist with a very clear pro Muslim bias while BJP on the other hand has no doubts on J & K being an integral part of India where separatists have no place and is perceived to be anti Muslim. The aim of this article is not to delve into religious preferences or perceptions of various political parties but on the likely repercussions of this development on the state of J & K and the country as a whole in the near future – more precisely till the next general elections in 2019.

The fact that all opposition parties were extremely critical of BJP for having formed a coalition government with PDP is not a secret. Today all of them are once again criticising BJP for having pulled out of the coalition. However one fact cannot be overlooked or denied. In view of the fragmented verdict of the state elections in 2014, a coalition was the only answer if a democratic government was to be in place. With National Conference (NC) and Congress shying away from joining PDP, there was no other option for government formation. While some may disagree, it is pertinent to note that for a party like BJP to join hands with PDP was never an easy task but the fact that they did speaks volumes for their intent that was in the best interests of the state and the nation. BJP think tank must have given this issue a very deliberate thought and then come to a conclusion that it is better to be part of government to seek solutions to the problem than to sit outside. The fact that BJP was in power at the centre would certainly have influenced the decision. Surely this has to be seen as a pro active approach and harder of the two decisions. The only other answer was imposition of President’s rule in 2014 itself and without a doubt the opposition would have termed that as murder of democracy.

The immediate reaction of separatists, pro separatists and opposition parties has been two fold. Firstly they concur that security forces will have a free hand and military operations will increase manifold under President’s rule. Secondly they feel BJP withdrew support to seek political mileage in view of the elections in 2019. Possibly both perceptions are erroneous since logic dictates otherwise. It will be very foolish to assume that intensity or number of military operations is governed by the kind of government that is in place. President’s rule does not imply that the security forces will go all out and the valley will be teaming with gun wielding soldiers in every nook and corner. These are just canards spread by politicians and pro separatist elements to scare the local population and win sympathy. The only major difference will be that decision making related to anti terror operations will be quicker which will add to effectiveness of military operations. The number of operations will, as before, depend on the actions of terrorists and pro terror groups. In counter terror operations on one’s own soil, the security forces are mostly in reaction mode. It is very rare that they get an opportunity, based on very specific intelligence, to actually initiate and launch an operation against the terrorists so as to nullify their plans and save loss of civilian life and public property. 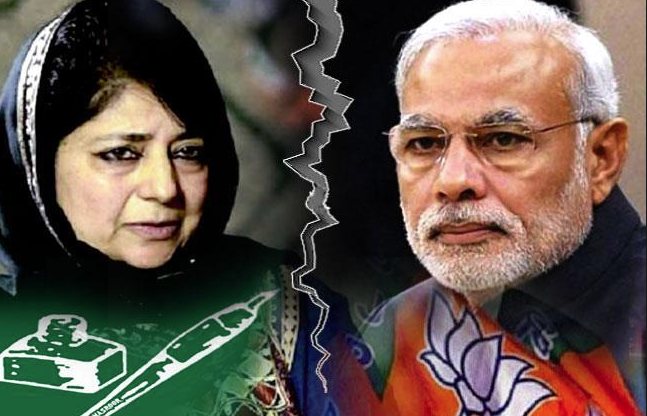 Will BJP get any political mileage for next elections in 2019 after this break up with PDP? This is highly debateable and there are some who believe that it may be advantage opposition at the cost of BJP.  After all opposition is blaming BJP for the break up and for leaving the state in a lurch. IF President’s rule can deliver a better and pro active government with obvious results in next few months then surely BJP may get some political mileage. But please mark the word ‘IF’. In principle President’s rule is not welcomed by most people so there is very little chance of BJP gaining any advantage, particularly in the valley. Instead there is a possibility that separatists may increase their nefarious activities and that may not bode well for BJP in the state.

As far as rest of the nation is concerned, in all probability the decision of BJP to withdraw support would be seen as a positive step. It is so because PDP is considered as a pro separatist party that plays a double game – it milks India but bats for separatists. However it may be very naive to assume that a voter in Manipur or Kerala or Orissa or UP will vote for BJP in 2019 just because they withdrew support to PDP. The common man on the street has more pressing local issues to deal with and while J & K may interest him from time to time, it is very unlikely that it will influence his vote.

So what is in store for J & K in the near future? First and foremost the state elections may be held jointly with the national elections and not before. Will that be advantage BJP? Frankly it may not matter as the regions of Jammu and Ladakh are likely to vote as they did in 2014 and voters in valley are not likely to change their mind in favour of BJP. Thus it will be a house divided once again with PDP, NC and Congress being left to forge any alliance that may be possible. BJP is unlikely to form a coalition government once again and it will not get a majority on its own. If there is no alliance then it will be back to President’s rule for the state. However if the valley’s voting pattern changes and a part of PDP seats go in favour of NC or Congress, there is an outside chance that BJP may emerge as the single largest party since it is likely to retain most of its present constituencies. If a coalition government is formed, it may be a repeat of Karnataka drama in J & K with the largest party sitting in opposition.

Successful conduct of Amar Nath Yatra in July will be first major test for the new administration. If it goes off well, chances are there may be a few quiet months in the valley. If it does not then there will be greater turmoil with increased protests in Jammu and some other parts of the country. This will give rise to political blame game and further vitiate the environment in the state. It may result in more operations by security forces followed by more anti government protests across the valley.

There is a likelihood of local political parties and separatist organisations stepping up their rhetoric against the central government keeping in mind their political and non political stakes in the future. The former would be aimed at seeking votes but the later would be aimed at keeping on right side of the separatists, their organisations and other pro Kashmir elements across the border. As far as Congress is concerned it will be there and yet not there since today its role in the state is very limited and nationally its presence is on a continual decline. They are in the ‘me too’ category and only opportunism will dictate their decisions. Organisations like Hurriyat and others are likely to see more curbs on their fund inflows and possibly further restrictions on movements of their leaders. The centre is unlikely to talk to separatists as hitherto before. For the time being BJP are unlikely to broach the subject of Article 370 or return of Kashmiri Pundits except may be as part of political rhetoric just before the next general elections in 2019.

Given the current mood after the murder of Aurangzeb, an army soldier, by terrorists there is some disenchantment with anti national elements in the valley. Possibly there is also a fatigue factor within some sections of the population who want a period of peace. It is time the authorities explore this subtle change and see if they can wean out more local people from sympathising with terrorists and separatists. The centre on its part has to ensure an effective and pro active administration – may be just to prove a point of being fair and concerned for the state. This may be a good opportunity to reach out to local people directly without having to go through two faced local politicians in the government. Without a doubt the army could play a big role in any such initiative. It is not for nothing that while the Indian army is known for its soldierly qualities, it is equally well known for its humanitarian traits. All in all it will be a testing time for the new state administration for next few months.