50 years ago, Vern Nelson, owner of Bass Point Resort, caught a ‘giant frog’ in Lake Geneva. The 15- inch specimen weighed 17 ounces. This species had been brought to this area from Michigan by an American diplomat, it is said. Frogs range in size from the recently discovered 7.7-millimetre (0.30 – inch) of Papua New Guinea.

Scientists have found frogs fossils that date back to the Jurassic period over 140 million years ago. Frogs are valued as food by humans and also have many cultural roles in literature, symbolism and religion. In human cultures, featured through ages in the form of poetry, songs or stories; frogs are found all over the world, and in every climate, except Antarctica. 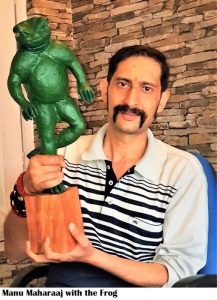 Frogs are amphibians, which comes from the Greek language and means “both lives.” Most frogs are born in water as tadpoles and gradually change into frogs .This allows them to be born and live far away from water, even on mountaintops.

There are approximately 4800 species of frogs around the world. They can be found near any, and every, body of fresh water but prefer ponds, lakes, and marshes, because the water doesn’t move very fast.

They are however, the most cosmopolitan. At the Frog Museum in the small medieval town of Estavayer-le-Lac, Switzerland, renowned for being one of the most beautiful protected natural sites, stuffed frogs depict the multiple Froggy scenes, in a 150-year old collection of domestic life in the 19th century. 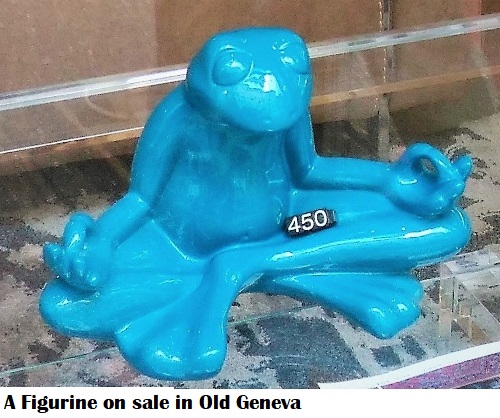 Walking in the streets of Old Geneva town I saw varied figurines of frogs on sale. I was impressed by their colourful displays and in fact was lured to buy all the variants in designs and styles. I was inspired to model ‘frog camouflage’. Meenakshi did the colours.

I was also reminded of the Italian scientist, Luigi Aloisio Galvani’s discovery of Animal electricity in 1780 by observing the signals from tissues of the nerves and muscles of dead frogs’ legs. With each flash of lightning, the frog’s legs twitched and jumped as if they were alive. 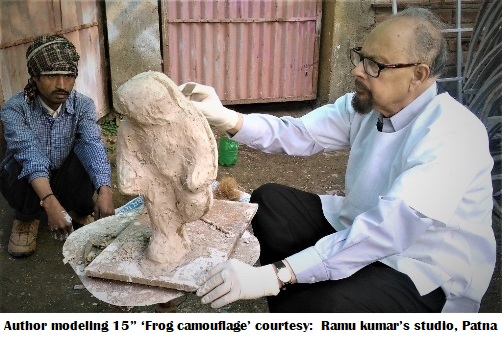 Back home my wife , Doctor Vishav Kirti , was reminded of the frog dissection as a biology student in G G M Science college, Jammu. “A frog has a spine. Humans are also vertebrates. By studying the anatomy of a frog ,we can learn about our own anatomy” she said. “Both man and the frog have the same kinds of organs and systems of organs. The frog has a highly developed nervous system. The important parts of the frog brain correspond to comparable parts in the human brain.”

Amphibians have been a good food source. It is conservatively estimated that humans consume up to 3.2 billion frogs for food around the world every year. 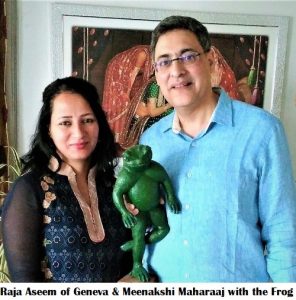 Frog legs are one of the better-known delicacies of French and Chinese cuisine. Frog legs are rich in protein, omega-3 fatty acids, vitamin A, and potassium. The taste and texture of frog meat is approximately between chicken and fish.

Geneva is well known for the quality and diversity of its restaurants and given its proximity to the French border, it is hardly surprising that it boasts such a large number of authentic French establishments. From frogs legs to snails the stylishly presented dishes are influenced by France but draw on top quality Swiss seasonal produce.

Frog meat is considered as haraam (non-halal) according to mainstream Islamic dietary laws.

Many environmentalists urge the restriction of frog consumption—especially those harvested from the wild—because amphibian populations are declining and frogs are an essential element of ecosystems. To avoid the complete disappearance of the species in some countries, the capture of frogs has been completely banned or strictly controlled. A few years ago India dominated in frog leg export , it is banned since 1987. In many parts of Kerala, especially Central Kerala, frog legs are a delicacy.

Frogs are an important part of our environment for many reasons, not least because:

Frog populations have been declining worldwide at unprecedented rates, and nearly one-third of the world’s amphibian species are threatened with extinction.

Up to 200 species have completely disappeared since 1980, and this is NOT normal; amphibians naturally go extinct at a rate of only about one species every 500 years.

Amphibian populations are faced with an array of environmental problems, including pollution of our waterways, loss of habitation, invasive species, and climate change. One of the major culprits in any household is the cleaning materials we use; dish-washing and laundry products, toilet cleaners and a host of other cleaning products we use in our homes.Decline or extinction of their population has significant impact on other organisms along with them. 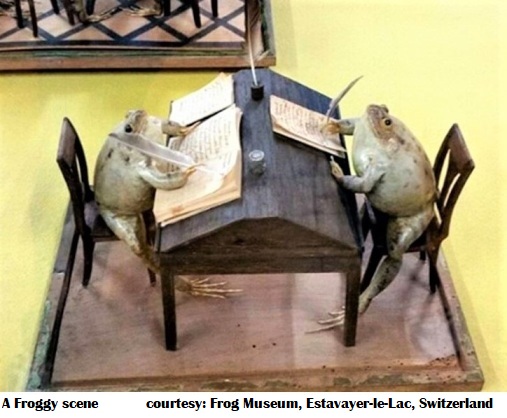 Because of their importance in ecosystem, according to ProNatura, a Swiss environmental organization, throughout Switzerland, temporary barriers are installed to prevent the amphibians from crossing the roads, lest they are crushed.

Though, during my walks in Varsoa, I did not come across any such barrier.

Frogs rarely breed in captivity that is the basic problem.

Unless we act quickly, amphibian species will continue to disappear, resulting in irreversible consequences to the planet’s ecosystems – and ultimately to us humans.