Kajriwal's bureaucrats would have found a way, for no one can quote scripture better than the devil; but by declaring war.....

For the last three years I have been a resolute supporter of Kejriwal and AAP, reposing faith in the change he had promised (and delivered, to a substantial extent, in spite of the obstacles put in his path by a vindictive central government). He has made many mistakes along the way, but these I put down to inexperience and the residual effects of his turbulent start in politics. My rationalising was that, so long as he did not compromise on his core values – integrity, simple life style, transparency in decision making, upholding secular ideals and keeping the people’s welfare at the centre of his politics – any administrative or political error or miscalculation would be par for the course. Of late, however, Kejriwal has made it very difficult for me to retain any faith or trust in him, and has compelled me to question his capacity to deliver any real “change”.

The first stirring of doubts began with the nominations of two businessmen, with no record of any public service or connection with the IAC (India against Corruption), as the AAP candidates for the Rajya Sabha. The choice was as inexplicable as it was shocking. Couldn’t AAP find even two persons within its own fold or from among the other 1.2 billion who better reflected its ethos and values? The only assets which these two worthies brought to the table was money, and no eyebrows would have been raised if any other party had chosen them. But AAP ? I waited for Kejriwal to come out with a simple explanation that could allay the misgivings but till today he has not uttered a word. I was left to draw my own conclusions, dear reader, and no doubt they match with your own. 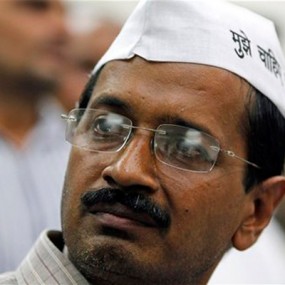 But the faith still lingered, for when you want to believe in something desperately uprooting the gods you have worshipped can be a bloody exercise, as Charles Lamb noted many decades ago. However, what Kejriwal and his MLAs did last Tuesday to the Chief Secretary of Delhi was the final act of repudiation of any ethical standard of behaviour or responsible conduct. To misbehave, manhandle and assault a senior officer just because he disagrees with you is not only outrageous and distressing, it is also moronic . At one stroke, it has negated everything that AAP claimed it stood for and exposed it as just another malignant entity in the garbage heap of Indian politics. The mirror now reflects the true face of Dorian Grey. The official investigation will doubtless drag on, some people arrested; the BJP and Congress will gleefully organise protest dharnas, secure in the belief that their MLAs have not beaten up a Chief Secretary, at least; AAP will allege vindictive politics (it has already alleged that the central govt. is anti Muslim and anti-Dalit since the two arrested MLAs belong to these denominations). But the deeper fall – out of the incident will be disastrous for Kejriwal and his party.

It is not for nothing that the permanent bureaucracy is known as the steel frame: it is what holds the edifice of government together. Any political executive has to work through this frame, and any Chief Minister worth his salt knows that if you continue battering it it will cease to function. A wise man does not quarrel with his tools. The prudent CMs therefore tinker with the schema, not demolish it; they remove a few rusted parts, implant a few of their choosing but retain the structure as a whole. The bureaucracy has accepted these minor OPD procedures as a political privilege. But Kejriwal decided that he did not need this structure and sought to replace it with his own MLAs and volunteers, disrupting the very Operating System of government. He has suspended more than 200 officials, charge- sheeted and filed FIRs against countless more, publicly humiliated and castigated senior officials including three past Chief Secretaries, labelled them collectively as agents of the BJP and the Lieutenant Governor.

He certainly had reason to feel frustrated and angry as he was unable to implement many of his programmes because of the perceived “non cooperation” by this bureaucracy. But he should have realised that the filibustering was not the fault of his officers but was a consequence of the peculiar power sharing structure of Delhi where all the powers vested in the central government and the LG. He should have appreciated that the Delhi bureaucracy is perhaps the most miserable and unhappy in the country, caught in the cross-fire between three constitutional authorities. A wiser man, less tangled in his own ego, would have sympathised with these officers, understood their constraints and sought their help and cooperation in finding a way through the mine field of the battle zone which Delhi has now become. And his bureaucrats would have found a way, for no one can quote scripture better than the devil. But by declaring war on them, and now by beating up the Chief Secretary, he has created a permanent enmity with them. The anger against him and his party runs deeper in the government structure than we had thought, as the protests and heckling in the secretariat the next day indicated.

Kejriwal has walked into the trap set for him by the BJP and the central govt. The remaining two years of his term were crucial for him to fulfill his promises to the citizens of Delhi, but his intemperance and violent behaviour has now ensured that he will get no cooperation or assistance from his employees and officers. The public at large is revolted by his reprehensible behaviour: they had brought him in to see change, not anarchy. Kejriwal had one small window to defuse the situation, but by refusing to utter a word of regret, by not taking any action against the two MLAs responsible for the assault, and by rushing off to Chennai to play second fiddle to Kamal Haasan instead, he has sounded his own death knell. He is now a lame duck, a king without a kingdom, another failed chapter in India’s saga of desired change. The Americans have a better term for such a condemned figure: Dead Man Walking.