There is no doubt that the incident in Shopian was led and organised by those who do not mean well for India and J&K. The moot question is who were the leaders and organisers?

The Shopian Incident in Kashmir

On Saturday 27 January 2018, a small army convoy of about eight vehicles came under heavy stone pelting and petrol bomb attacks from a mob of over 200 local terror sympathisers in Shopian, Kashmir valley. The agitators not only tried to snatch arms from the army personnel but also tried to drag a few soldiers from their vehicles. Ultimately the soldiers had no option but to fire a few rounds that resulted in the death of two protestors while at least eight army men were seriously injured. The state government authorities, after consultations with Defence Minister, have filed a First Information Report (FIR) against the army unit concerned and slapped a charges under Sections 302 (murder) and 307 (attempt to murder) of IPC. As expected no FIR has been filed against the protestors even though they were clearly the provocateurs.

In the J & K State assembly during discussion on this incident, the Chief Minister Mehbooba Mufti said that while Army as an institution is fine, one cannot rule out a few black sheep in the organisation who make mistakes and therefore an investigation was required to identify and punish them. She went on to sympathise with the near and dear ones of the two protestors killed in the incident and said their loss was heavy. The Chief Minister obviously believes that agony and loss of near and dear ones is only limited to the civilians (even if they are terror sympathisers) but does not apply to personnel of armed forces or their families. This is indeed a pathetic and tragic truth of the approach of many politicians today when it comes to army personnel fighting terror in J&K. Mr Omar Abdullah of National Conference went a step further and said that army men murdered the two civilians and therefore must be charged with culpable homicide. In his view there was no case for self defence as far as the soldiers were concerned. Once again the logic is simple – self defence clause is applicable only for protestors and anti national elements but not for soldiers. It is a pity that Omar Abdullah, a third generation scion of Abdullah family, conveniently forgets that not only is his family mainly responsible for the problem in J&K but also for keeping it on the boil instead of having worked towards a solution in last six decades. 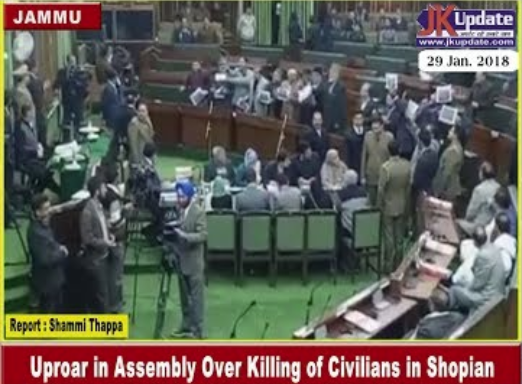 It was indeed pathetic to watch state’s Director General of Police (DGP) Mr S P Vaid on television when he stated that a FIR had been lodged against the Army unit (not against any particular individual) and an open investigation would be carried out. Frankly he came across as a very unsure, vague and hesitant individual since he himself did not look convinced of what he was saying. Seeing him one did not feel assured that police force in the valley was in capable hands. In many parts of J&K, including Shopian District, most operations in civilian areas are carried out jointly with police where Army is the senior partner. One would have thought that a senior officer like DGP would have been more forthright and called a spade a spade instead of mouthing what was fed to him for political expedience. In his briefing the DGP hardly delved on what the protestors did or who organised the mob. Being an experienced police officer he would have known that a mob of over 200 is not a spontaneous event particularly when they had petrol bombs and loads of stones to pelt at the army convoy. In all probability it was a planned attack since those who organised the attack must have realised that it was an isolated Army convoy and therefore an easy target. In all fairness one needs to ask where was the local police that was responsible for law and order in the area. Should they not have swung into action if the Army convoy was attacked? Should they have not woken up when a mob was gathering in the area?  But then neither politicians nor the police hierarchy want to face such embarrassing questions that expose them. Lastly instead of filing a FIR against the army unit for an open enquiry, it defeats logic why the same could not have been done by lodging a FIR against the protestors. If this question was posed to Sherlock Homes he would have said “Elementary, my dear Watson, it makes more political sense to blame army than protestors.”

There is another aspect that needs a lot of answers. Why has the FIR been filed by the state? It should be done by the aggrieved party or an interested party on their behalf. If the state feels it is their duty to protect their subjects and therefore they can file FIR on their behalf, then on same logic why has a FIR not been filed on behalf of the army personnel whose security too was at risk? Are army personnel not subjects of the state and is the government not responsible for their security? Army personnel are posted in J&K at the behest of the government for tasks allotted by the government in the interest of the nation. This inherently implies that in case anyone has an issue against the army or files a FIR for an act committed by a soldier while on duty, then the onus for defending the soldier lies on the state and not on the individual soldier. Surprisingly in this case we have the state filing an FIR against the very soldiers that they should be defending. This is bizarre and a very disturbing trend that can have serious repercussions in the long run. One should not forget that Army has its own system in place under the military law to investigate and punish its soldiers for all acts of misconduct or stepping out of line. Whenever the army has taken cognisance of an offence on part of a soldier, it has ensured proper action not only in J&K but elsewhere too. It is obvious that in this case it is politics that has overtaken all other logic and that is why the FIR by the state against army personnel and not the protestors. This partisan approach of the state towards its subjects is something that reeks of appeasement on one hand while it shows lack of concern or compassion for the man in uniform on the other.

Is it a coincidence that on 26 January J&K government had offered amnesty to stone pelters and next day this incident takes place? It does seem that grant of amnesty emboldened anti national elements who were quick to seize the opportunity and organised a stone pelting incident to prove a point. Why is the government projecting this incident as a law and order problem? Some have even gone to the extent of saying that the police should have dealt with the same instead of Army taking action on its own. How can this incident where well organised anti national elements, that support terrorism in the state, attack an army column be seen as a simple law and order problem? In any case it is apparent that the police was missing from action while all this was going on. If that be so then were army personnel expected to continue to be at the receiving end from protestors till the police arrived? Should army personnel have allowed the mob to drag and lynch some of their comrades or suffer casualties by petrol bombs but not acted in self defence? Should the soldiers have allowed the protestors to snatch their arms? It is time for all concerned to get real and understand that while a soldier has no hesitation to lay down his life for the nation, it is his duty to fight against enemies of the nation till his last breadth. Soldiers cannot be expected to be mute spectators while anti national elements prevent them from doing their duty. In such cases it becomes imperative for them to fight back albeit with restraint where required. This is what the soldiers did in Shopian few days ago. If they had not practiced restraint possibly there would have been many more casualties from the protestor ranks and not just two.

Has the central government played in to the hands of CM Mehbooba Mufti and other anti national politicians in J&K by allowing the state to file a FIR against the soldiers? What were the Defence Minister’s compulsions in giving in to Mehbooba Mufti’s unreasonable demand? There is no doubt that the incident in Shopian was led and organised by those who do not mean well by India and J&K. The moot question is who were the leaders and organisers? Unfortunately politicians and authorities instead of trying to unearth and arrest those who were responsible for the incident find it politically convenient to charge the very soldiers who fight terrorists and their sympathisers on behalf of the nation. The world acknowledges the humane approach of the Indian soldier but our own politicians fail to do so and go to the extent of charging him with murder when all he did was to show restraint and use minimum force as a last resort. Indian soldier is a disciplined man who goes about his job diligently without any complaint or grudge. That is his strength and character but if civilian leadership starts to question this ethos of the soldier then it may not be long before the soldier may have many more questions in return. If that happens then an irreversible damage would have been caused to the institution of Army which will have a telling effect on the future of our country.