The ballad of Padmavat has been part of Chittor folklore for centuries after it was written by Malik Muhammad Jayasi in 1540 AD. It is interesting to note that Jayasi had a Rajput patron in Raja Jagat Deva, an ally of Sher Shah Suri. One wonders why the past and present generations of these Rajput fringe did not object to this ballad from being sung and recited for hundreds of years. Today when it is made into a film suddenly their Rajput heritage and pride is at stake? Even school history books, at least in the sixties, had Padmini’s story where it was written that her reflection in water was shown to Sultan Khilji. Surprisingly Rajputs did not oppose the story for so long. Frankly history of Chittor is more about bravery and valour of Rajput soldiers who managed to free their King Rawal Rattan Singh, husband of Padmini, from the captivity of Khilji under the daring leadership of an uncle of Rani Padmini by the name of Gora and less about Rani Padmavati herself. It is believed that Rani Padmavati and a lot of other women in the fort committed ‘jauhar’ once it was clear that Raja Rattan was about to lose the battle that took place subsequently. However it must be recalled that ‘jauhar’ was a tradition among most Rajput kingdoms of that time wherein women committed suicide to prevent being captured by the victorious intruders. Therefore this act of Rani Padmini and other women in the Chittor fort, brave as it was, cannot be viewed in isolation. 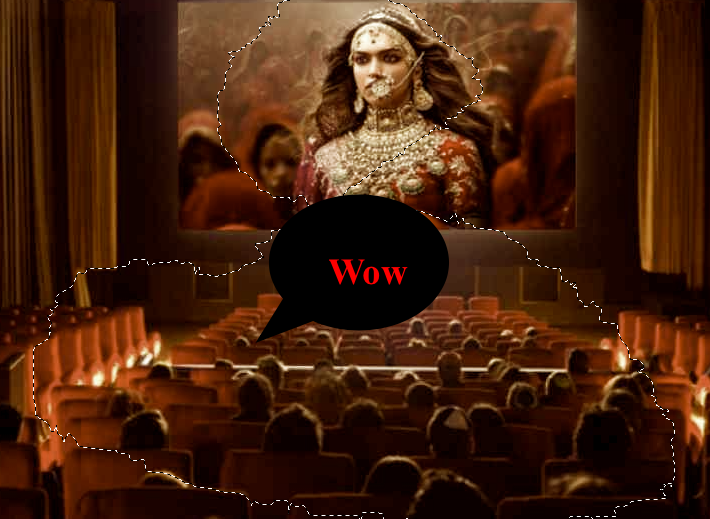 A Rajput queen may not have sung or danced in front of audience as the film possibly depicts. But that is part of imagination of a creative film maker. It may be just a form of expression of the queen’s joy or happiness – surely in her hearts of hearts at times she would have felt like singing or dancing. The director has just used that emotion and depicted it in the form of a dance. This should not be construed as if it is meant to project that Rajput queens danced in front of audience as a matter of routine. Films, paintings, stories and other forms of art do carry an artist’s creative stamp and that is how an artist can make a difference, otherwise art would tend to become mundane and similar. In any case it is hardly a reason for fringe elements to resort to violence or vandalism.

In the end Padmavat is just a folklore ballad that is being presented in the form of a movie. If Rajput community differs from this storyline, then they should consider making another movie and present the story as it actually played out centuries back. This would be a better way to educate the viewers rather than resorting to violence to prevent the screening of the story as told in the ballad. History is replete with ballads, stories and other forms of folklore that at times may not be totally true; surely one cannot fight or disown all these. They are works of art and literature in their own right and tend to gain credence as time goes by.

If Rajput community really wants to pay tribute to Rani Padmavati’s courageous act of ‘jauhar’ then they can do much better than just fighting to prevent screening of the film Padmavat. The act of ‘jauhar’ was performed by Rani Padmini and others to save their honour and to save themselves from atrocities of the enemy. Uttar Pradesh, Madhya Pradesh and Rajasthan are three of the six states that have banned the film. These three states are also at the forefront of crimes against women in the country that includes rape and all kinds of other atrocities. Would it not be better if Rajputs and their organisations used all their efforts and resources to fight crimes against women in their respective states instead of fighting to ban one film that in reality helps no one? Would that not be a real tribute to Rani Padmavati and preservation of rich Rajput heritage? It is time the likes of Karni Sena and others ponder over this rather than resorting to violence, vandalism and destruction of public property that only costs the nation dear.

Coming to legal aspects, cinematography and films are ruled by the authority vested in central government under Section 60 of the Union List as per the constitution. Section 33 of the State List clearly says that states are are obliged to follow the provisions of Section 60 of Union List for cinemas. This makes CBFC the ultimate authority as far as certification of films is concerned. The Supreme Court too has held the same view in its judgment on 18 January 18. This should put the controversy to rest for all law abiding citizens of the country.

It is important to understand that when a fringe develops it is a reason for worry, when this fringe is allowed to flourish it becomes dangerous but when state starts sponsoring the fringe – then it can only result in a divided society where common people invariably suffer and democratic rights and principles take a back seat. The states banning the movie have just done the last by agreeing to appease the fringe that is opposing the screening of Padmavat. It is time for central government to step in and put things in order. No nation, or a state of the nation, can afford to be held to ransom at the whims and fancies of a miniscule percentage of its population – their votes notwithstanding.