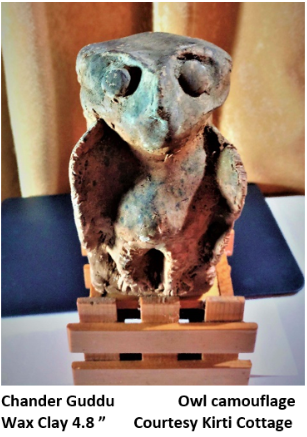 Owls have long fascinated humans. From prehistoric cave paintings to popular modern children’s stories, these magnificent predators have been seen as harbingers of good fortune and impending disaster, as icons of fear and wisdom, and as the powerful sidekicks of magic-makers. Owls can be found in nearly all parts of the world and across a multitude of ecosystems.

Early 21st century, these birds’ breathtaking beauty, majesty and awe-inspiring power enthused me to sculpt an owl in its camouflage.

Owls seldom make their own nests; rather, they take over the nests or homes of other creatures. One way that humans have helped owls to have a habitat is through the creation of nesting boxes. They are made in a fashion that attracts the owls and that they feel safe in them. All owls are carnivorous birds of prey and live mainly on a diet of insects and small rodents.

Looking for an environmental balance, in Dalhousie, living near Boarding Houses, I designed an owlery, A purpose-built owl-house to use as rodent control, though I wonder if any owl ever nested in it.

This year, living with my son, Raja Aseem, I observed that Owl had a distinct position in Genevan society. ‘The owl represents wisdom, perception and silent observation’; ‘we can provide with an improved ability of seeing what is happening around’ claim Owl RE (Research & Evaluation) based in Geneva, Switzerland.

‘Housed in a historic building dating from 1853, the Little Owl Restaurant is Geneva’s oldest continuously operating restaurant.’ “With Three generations of great hospitality!” Pub continues to be a landmark in downtown Geneva. Built in 1908, the Owl Tavern embodies the traditional north woods tavern, in a welcoming rustic setting.

Looking at the owl figurines on sale at the galleries of Geneva’s iconic Old Town with exorbitant price tags, the city is ranked among the most expensive in the world; and on display in the  ‘Swiss Museum for Ceramics and Glass’, Geneva, I take pride in what I did back home.

All I perceived about the bird, then, was perhaps this much:-

• The smallest owl—measuring some 5 inches—is the elf owl . The male and female dart around trees.

• Owls possess large, forward-facing eyes and ear-holes, a hawk-like beak, a flat face, and usually a conspicuous circle of feathers, a facial disc around each eye.

• Owls are famous for their exceptional eyesight ; and it was thought that you could gain better eyesight from them. They, like humans, have binocular vision, known for their disproportionately large eyes in comparison to their skulls. Their large eyes are fixed in their sockets.

• The eyes are so widely spaced on the head that you see only a single iris at any one time; & can move independently of each other. 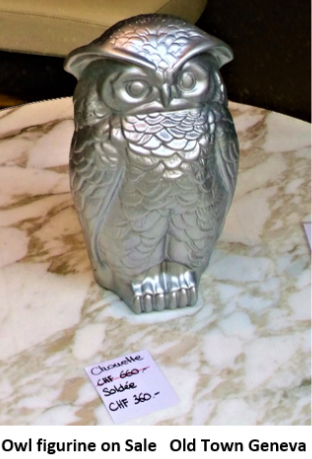 • Owls are farsighted and cannot focus on objects within a few centimeters. Their far vision, particularly in low light, is exceptionally good.

• The stereoscopic nature of the owl’s forward-facing eyes permits the greater sense of depth perception necessary for low-light hunting.

• With the amazing ability of an owl to rotate its neck to extraordinary degrees, they can view their surroundings; enabling them to see behind them without relocating the torso, thus reducing the amount of sound. Owls have 14 neck vertebrae compared to seven in humans, which makes their necks more flexible.

• Owl’s claws are sharp and curved.

• While the auditory and visual capabilities of the owl allow it to locate and pursue its prey, the talons and beak of the owl do the final work.

• The downward-facing beak allows the owl’s field of vision to be clear, as well as directing sound into the ears without deflecting sound waves away from the face.

• The dull coloration of their feathers can render them almost invisible under certain conditions. Usually, the only telltale sign of a perched owl is it’s vividly colored eyes.

• Caught prey can be felt by owls with the use of filo plumes—hair like feat  hers on the beak and feet that act as “feelers”.

With my curiosity aroused, I learnt much more in Geneva:-

• The prominences above a great horned owl’s head are commonly mistaken as its ears; they are merely feather tufts.

• With ears set at different places on its skull, an owl is able to determine the direction from which the sound is coming by the minute difference in time that it takes the sound waves to penetrate the left and right ears. The owl turns its head until the sound reaches both ears at the same time, at which point it is directly facing the source of the sound. This time difference between ears is a matter of about 0.00003 seconds, or 30 millionths of a second.

• Owl females are somewhat showier than males. Female owls do not mate with the same male for a lifetime, while the male stays in his territory and mates with other females.

• Females stay at their nest with their eggs while it is the responsibility of the male to bring back food to the nest. However, if food is scarce, the male first feeds himself before feeding the female.

• An owl’s flight is practically silent.

• Facial and head markings; and brightly coloured irises are thought to be used in signaling with other owls in low-light conditions.

• Although humans and owls frequently live together in harmony, there have been incidents when owls have attacked humans.

• Much of the owls’ hunting strategy depends on stealth and surprise.

• Owl sits still most of the time.

• They also tend to mimic the colorations and sometimes even the texture patterns of the surroundings. With owls, they seem to watch us as much as we look at them. It is the piercing glare of equals: a mutual pondering on otherness and similarity.

• Owls are extremely smart birds. They are typically solitary and are not known to be affectionate.

Owl is possessive of his habitat and his territory. “It’s amazing that they come back to this busy location every year” 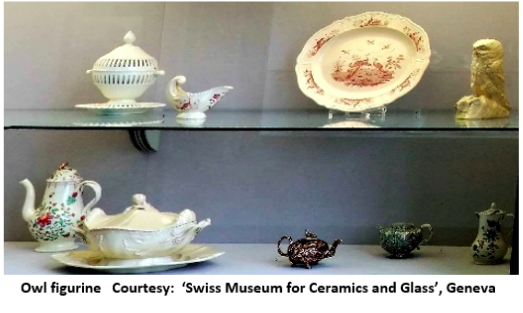 Geneva is a fascinating city, full of cultural and historical variety; people are cheerful. I feel privileged to have enjoyed the superb hospitality of the ‘Genevan Indians’ and the Himachlis living in Geneva.  The second most populous in Switzerland, Geneva, is the world’s center of diplomacy, rivalled only by New York and Brussels. It is not only the capital of the ‘Republic and Canton of Geneva’ but also a neutral territory. About 40% of Geneva’s residents come from other countries, making it the most international city in Europe. It is home to a number of UN agencies as well as several other international organizations.

Professional circles are difficult to enter. Many an incumbent may like to stay put even after having been bid fare well. Hovering around, they leave a little chance for the aspirants in the queue. Quite a few of them have merged in to the social fabric and tend to blend with galaxies of diplomats, expatriates, entrepreneurs and philosophers. 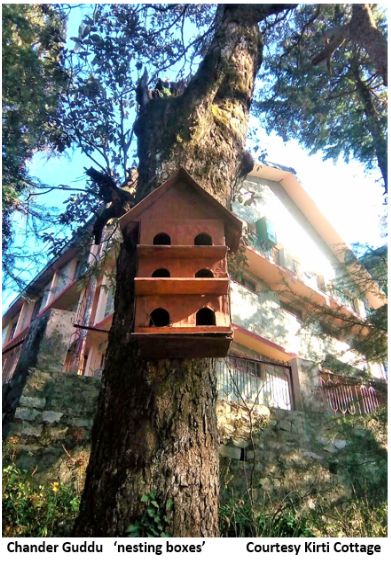 All owls are listed in CITES  (the Convention on Illegal Trade in Endangered Species of Wild Fauna and Flora) treaty. With TRAFFIC (Trade Records Analysis of Flora and Fauna in Commerce) reporting an incidence of the seizure of 900 plucked and “oven-ready” owls in the Asian continent. “.. “may mark the start of a new trend in wild meat. We will be monitoring developments closely.”

According to some folklores “if one ate the eyes of an Owl, they would be able to see in the dark”; “Owl meat could also be eaten as a natural aphrodisiac”.

Saving the owl will save an entire ecosystem on which plants, other animals, and humans depend. The spotted owl is considered an indicator species -a gauge of the health of the eco system that provides its habitat.

Swiss Bird Alert is the app for bird watchers in Switzerland “..watching owlets would be just like the behavior you would expect of people coming to see a newborn baby at your own house,”

The Swiss Action Plan reviews the present situation of the Little Owl. “In our country, the Little Owl has lived in the immediate vicinity of man for hundreds of years.” BirdLife Switzerland is active for the conservation of biodiversity, specifically by means of improving habitats and increase in the offer of nest boxes. Also “Nature is to benefit by the knowledge of the Swiss Ornithological Institute.”

The owl can see that which others cannot;

which is the essence of true wisdom