Even the most rabid of Mr. Modi’s detractors would not grudge him one thing: that he is an orator par excellence with an acute grasp of crowd psychology. He has all the arrows in his quiver: the suggestio falsi, the rhetorical question (“kaha tha na?”), the breathless tapering off of a sentence, the pregnant pauses and suspenseful silences, the pumped up fist, the innuendo and worse. At his best he can be almost a Shakespearean figure – a King Lear, an Othello, even a Hindutva version of Richard III (“A cow, a cow – my kingdom for a cow!”). Why then does he have to descend to the level of a Kilkenny cat in his election rallies, as he recently did in Himachal? His generic hatred for the Gandhis was on full display but that is something we have come to accept, even though we still don’t understand what lies behind it: there appears to be something almost personal behind it. But some of his comments went way beyond political antagonism. By calling them termites and rakshash (devils), by branding the AICC as the All India Corruption Committee and terming the Congress ideology as “sadi hui soch” (rotten, putrified thinking) he has lowered the dignity of the Prime Minister’s office and exposed both his hubris and insecurities. Before Mr. Modi’s arrival we had become accustomed to a different style of oratory from our Prime Ministers for the last twenty years or so. Mr. IK Gujral was the quintessential gentleman, seeking to make friends and to persuade by debate and discussion. Mr. Vajpayee was a fiery orator himself but his metier was passion, learning, poetry, reconciliation. Mr. Manmohan Singh was no orator but he was soft-spoken, learned, polite and never confrontationist. Their public speeches were both conciliatory and critical, but never scatological. Their followers also took their cue from their leaders’ styles, and public discourse rarely crossed the laxman rekha. But all that has changed with the new government . Are the votes worth it if they are won by broadcasting hatred, anger, contempt, calumny and vitriol ? There is so much anger in Mr. Modi that I cannot but quote the Buddha: You will not be punished for your anger, you will be punished by your anger.

Delhi just has to be the most messed up capital in the world – administratively, politically and environmentally. It is becoming more dysfunctional by the day. Things have become particularly bad over the last three years because Mr. Modi finds it hard to forget that Mr. Kejriwal delivered him the biggest haymaker of his political career by winning 67 out of 70 seats. Ever since then the Union government has a simple one point agenda for Delhi – let its administration and civic services deteriorate to a point where the AAP is totally discredited and Delhi-ites are ready to lynch Mr. Kejriwal. It does this through a multi-pronged strategy: don’t allow the AAP to legislate any new initiatives (by sitting on its Bills – at last count about 11 Bills were awaiting approval), intimidate the IAS and Dhanics officers into being loyal to the Centre rather than the state, use the three Municipal Corporations (all BJP controlled) to deliberately deny proper civic services to the citizens by constantly raising financial demands on the Delhi government and instigating strikes, ensure non-cooperation by central agencies such as DDA, the Delhi Metro, CBI etc. And its lethal trump card is of course the Lieutenant Governor, a latter day Viceroy, a superannuated appointee who can (and constantly does) veto the wishes of a government that has been elected by twenty million voters. He is omnipotent but accountable to no one. None other than the Supreme Court has held, in a recent obiter dicta, that he is the undisputed and constitutional head of Delhi. But have you ever seen him appear on TV to explain why he is presiding over such disarray and shambles, and what does he propose to do about it ? Why grill poor Mr. Kejriwal on prime time every evening when the Big Boss is the LG ? Is it that asking him to give an account of his administration would amount to some kind of lese majeste ?

As if this were not bad enough, there is also a plethora of statutory authorities issuing all manner of directions, sometimes contradicting each other, to which nobody pays any attention, each questioning the other. The city is a modern tower of Babel, confusion confounded – should trucks be allowed in or not? Should Badarpur TPS be shut down or not? What the hell do we do with the 15000 tonnes of garbage we produce every day? Should all construction activity be stopped? Why is garbage still being burned at the landfills? Should odd-even be introduced again? Does it actually lower pollution levels? Is Amarinder Singh allowing stubble burning in Punjab to get even with the BJP and AAP? There is no shortage of “Authorities” or Ideas in Delhi – just a famine of people who will implement them. 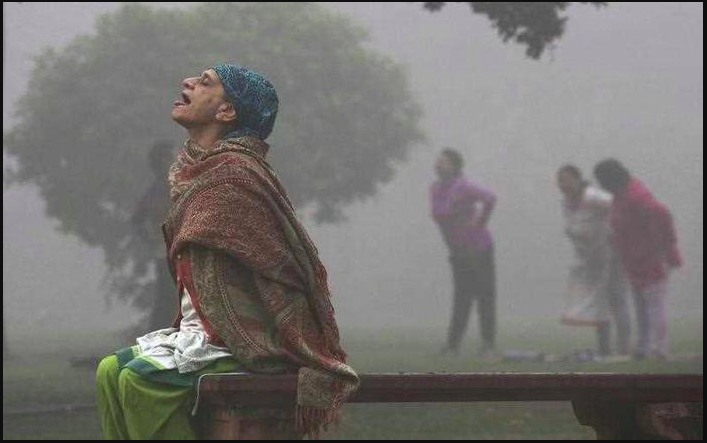 And while India’s finest grapple with these daunting issues, the Air Quality Index is approaching the 500 mark, and the PM 2.5 (no, its not the title of Chetan Bhagat’s next book, though almost as deadly for the brain) continues to climb. We are constantly looking for exotic solutions to the death shroud of pollution tightening around us – mechanised sweeping of roads, seeding of clouds for rain, spraying water from helicopters, installing huge air purifiers at major intersections. The courts are on a banning spree; ban away a problem and it will disappear. But it doesn’t, because problems have to be resolved, not wished away by judicial dictats. Take the ban on stubble burning in Punjab and Haryana. It cannot be implemented by challaning or locking up 15 million farmers. It must be recognised that this is an economic issue, not just an environmental nuisance, as the NGT appears to think. It costs Rs. 2000 an acre to remove the stubble, money the already embattled farmer can ill afford to spare. There are mechanical devices already available to remove the stubble- straw chopper-cum-spreader, rotavator, happy seeder, cutter shredder, baler- which can either shred the stalks and spread them as compost or stack them in bales for use as fuel,fodder, feed or as raw material for paper units. They cost between Rs. 45000/ or Rs. 3 lakhs each, way beyond the means of the average farmer, especially when compared to a matchbox costing one rupee ! The government should make these implements available on a cooperative/community basis free of cost. In the long term it should wean these farmers away from the cultivation of paddy in these water deficit areas. Punjab and Haryana were never meant to grow a water guzzling crop like paddy, which is sucking dry the ground water table. Punjab is a water stressed state and practically all its blocks are in the “black” category. Stubble is a by-product of paddy and reduction in the area under paddy will solve both problems, of water and pollution. The same lack of clarity and political/administrative will applies to Delhi: we will not do the obvious and simple things: protect Delhi’s green cover and stop deforestation (400 trees are being chopped down at Pragati Maidan to make space for an international convention center !), protect the Aravallis and the Ridge (40% of which has already been lost) , our last defence against the deserts from the depredations of the Haryana and Delhi governments , revive the lost 600 water bodies of the city, preserve the Yamuna flood plains from ever increasing construction, declare selected roads as one-way to reduce congestion, add another 5000 buses to the DTC fleet (their numbers have actually gone DOWN by 2500 over the last three years), shift ALL industrial units out of the city (Beijing has done it, with remarkable results), introduce Odd-Even scheme mandatorily for two months every winter, stop ALL construction in the winters (dust is the biggest pollutant as per all surveys).

Delhi’s citizens are equally culpable for the mess they are in and deserve every particle of PM 2.5 which they breathe in every time they open their mouths to complain against the government. They will just not change their honey badger attitude and habits, and resist every reform or change. They continued to burst fire crackers this Diwali inspite of all appeals and orders. They will not walk or take the metro or a taxi (it is illustrative to see the hundreds of cars outside, say, Lodi Gardens every morning: they belong to people who will DRIVE half a kilometer to walk two kilometers in the park – why can they not walk the entire 2.5 kms?). They will waste hundreds of litres of water daily to wash their cars. They insist on polluting the Yamuna with hundreds of idols every year, they will burn huge mounds of firewood during Holi and Baisakhi. They will oppose Odd-Even or BRT or cycle lanes. They will defy every measure suggested by the government. Its an endless and despairing list, actually a DIY step-by-step guide to suicide. We are lemmings , led by honey badgers.

As I finish this piece in my flat in east Delhi I’m seriously wondering if I’ll ever get to see the sun again. The pigeon on my window sill appears to have read my thoughts, for it looks at me like Edgar Allen Poe’s raven and croaks: Nevermore!