Dharamshala: Elections to the Himachal assembly can be announced any day now, and this time many new faces are likely to enter the fray in a number of constituencies.

One such candidate who has announced his intentions is the President of  Gorkha Association  of Himachal and Punjab, Ravinder Rana who has declared to contest from Dharamshala constituency on a ticket of a national political party or as an independent. 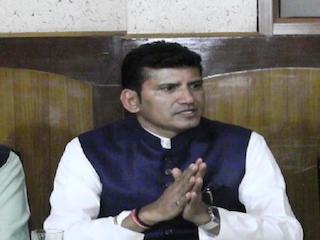 Another surprise entry is expected for Joginder Nagar constituency in Mandi district.  Prem Prakash Rana, born in Golwan Village of Jogindernagar is a successful businessman in Saudi Arabia. He is visiting his home state and has announced plans to contest the Himachal Vidhan Sabha.

Parkash too wants a ticket from a nationalized political party, but is willing to go it alone if not given a ticket by either BJP or Cogress.

Parkash left for Saudi Arabia in 1985 and now is wealthy businessman operating in transport, construction and other sectors.

Parkash claims, “around 700 Indians are working in my business, of which about 80 of them are from Himachal. I spend 7 to 10 percent of my profit fordevelopment works in Jogindernagar area”

Taking to Hill Post over phone Prakash said, “I intend to contest the elections from Joginder Nagar and if I win, I will work without salary, perks and will spend my time only for development of the area.”