It is beauty that will save the world....

The Roerichs, father & son, lived in India at a time when political, social & cultural upheavals were being engineered. They believed in replacing Western influence into a romantic indigenous style from the past traditions. ‘Let us always strive towards the beautiful’ was their pursuit. Art galleries at Naggar (Kullu) & Bangalore (Karnatka) are their creations. Nicholas Roerich was Russian by birth, but universal by inclination who firmly believed “It is beauty that will save the world”. He had created in a few years, a vast body of work that contained in the form of paintings a new vision: drenched in color landscapes, sweeping Himalayan vistas, jagged mountain peaks piercing  the sky, everything bathed in mysterious light.

Svetosav Roerich, the younger son of eminent artist & scholar Nicholas Roerich, had from the young age shown great talent of a brilliant portraitist with a unique ability to penetrate in to the inner world of people. He was a painter in the manner of his father, yet had held his own individuality and uniqueness because of which his paintings are known as ‘Yoga of Beauty’. His Himalayan landscapes, designed in monumental systems open a fantastic world almost unbelievable to one who has never seen them himself. 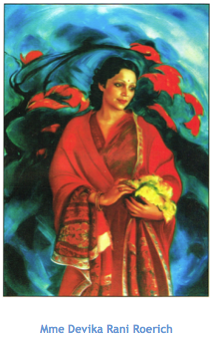 The artist adored sensuous beauty of women. Much of grace of face he captured was through her spirit of shyness and innocence. In 1945, he married Devika Rani, the first lady of Indian Cinema, grandniece of Rabindranath Tagore. She was a sublimely beautiful woman. All 365 gods of Kullu valley sent their representatives to meet Devika.

Who comes across in many of his paintings depicted inevitably with flowers in her hands. Together with his wife, he collected rare items of folklore and became acquainted with local culture, & founded the ‘Karnatka Chirtrakala Parishath’ in Banglore. For his contribution in the field of art and culture, Svetoslav had been honoured with the prestigious Padam Bhushan Award. Today his paintings adore many art galleries in many countries. Nicholas Roerich was a mystic in every sense who had dedicated himself to the Himalyas. No one has painted Himalayas as he has, whereas Setoslav was a romanticist to the core, He painted the valleys of India & the people. His landscaped offered glimpses of magnificence of poetic India, of spring in the KulluVally, autumn trees, rosy calligraphy of clouds and murmuring rivers; all as visions of joy.

He believed that portraits bring out the best of human characteristics’. He has done several portraits of Nehru. His portrait of Indira Gandhi was unveiled in the central Hall of Parliament in 1987. Incidentally he is the only one whose three paintings adorn the Parliament Hall. As Dr. S. Radhakrishan said, …….”His landscapes are poems of colour.”