‘A fool finds no pleasure in understanding but delights in airing his opinion’. (Bible Proverb 18.2)

A lot is being said and written about Dynasty and Dynasts after Rahul Gandhi’s speech and interaction at University of California, Berkeley in USA. It goes without saying that Rahul Gandhi’s justification of political dynastic progression by comparing it with dynastic progression in businesses and Bollywood in India was as foolish as foolishness itself. He pushed his foolishness to even greater heights when he stated that India runs on dynasties and dynasts. Does he not understand that businesses developed and nurtured by one generation qualify as family heirlooms and the founders have all the rights to pass it on to their progenies or whom so ever they please? Or that Bollywood is a totally different ball game and apart from initial launch facilitation, the family can hardly do anything more since thereafter success depends on public acceptance and individual skills. In politics it has to be understood that neither the nation nor the party belong to any one family. A national political party that has ruled the country for over 60 years out of a total of seventy years since its independence cannot be seen as a family fiefdom and willed to progeny of a particular family for generations to come. India today is a democracy and not a dynastic ruled state of yester years. In the best interests of the nation dynasties or dynasts cannot take it for granted that they will head the party or the nation if their party comes to power. Unfortunately in Congress party political sycophancy has taken such deep roots that it has more or less killed inner party democracy and therefore the claims from Rahul Gandhi that he is ready to be the President of the party and also ready to be the Prime minister of the nation if his party comes to power.

During his interaction at Berkley Rahul Gandhi asserted that he was ready to lead the Congress party from the very top but was waiting to be elected to the post of the President. What he did not mention however was that he was the only candidate being considered for the position of the party President and therefore the election part was just a farce. The fact that he has been the President in waiting for over three years now and still no competition has emerged from within the party proves the twin points of deep rooted political sycophancy and absence of democracy within the party. Nobody denies the siblings of politicians to follow in the footsteps of their parents but what is certainly questionable is when they are thrust on the party or the nation at the very top despite their lack of credentials or experience. If they come up the hard way through party ranks and acceptance of the public, no one will grudge them their success. Rahul Gandhi does not qualify in that mould by any stretch of imagination and therefore the charge of being a dynast. It may also be prudent to mention that many in Congress party have been crying hoarse for appointment of Priyanka Gandhi, another Gandhi sibling, as Party President for the bizarre reason that they see reflections of Indira Gandhi in her! That perhaps puts the nail on the Congress’ coffin as far as dynastic politics are concerned. Yet Rahul feels he should not be singled out and charged with being a dynast. 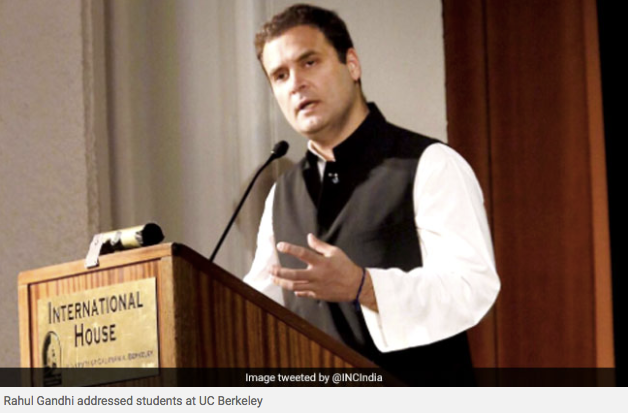 It defies logic as to why would someone aspiring to be Prime Minister of world’s largest democracy denounce his own country in a speech to university graduates in USA. Political parties within a country will always have different views and takes on many issues facing the nation but only a very foolish leader would go and wash his dirty linen while lecturing students at a premier university in another country. Would an aspiring American Presidential candidate talk of his country’s racial divide or white vigilantism while lecturing at an Indian or Chinese university? Rahul accused current Indian government of encouraging divisive politics, vigilante killings and attacks on journalists with dissenting views. He made it appear as if vigilantes were roaming free in India and killing at will while there was a government sponsored drive to eliminate people with dissenting views. His foolishness was on full view since it did appear as if he was giving an election speech in a small town in India instead of talking to students at an American University.

The Congress leader also criticised the government’s policies in troubled Kashmir, saying these had opened the space for terrorism. Surely either the Gandhi scion is totally uninformed or so foolish that he cannot see the writing on the wall. For the first time in last two decades possibly the terrorists and their outfits are on the back foot in Jammu & Kashmir today. Many of their leaders and hard core foot soldiers have either been eliminated or captured while their funding is being choked by the day. Misdeeds and selfish motives of top separatist leadership are being exposed to educate the local public. Yet Rahul Gandhi feels that they are getting more space. May be he is right since terrorists are getting more space in jails and burial grounds – something that is not to the liking of his party.

In another part of his speech he said that the government had introduced the Goods and Services Tax (GST) in a very hurried and unprepared manner. What he failed to mention was that Congress governments kept talking of GST for nearly 12 years without having the political will to implement the same or to get the country ready for it. On the other hand BJP government did it in just three years and today GST is a reality.  The most foolish charge that he levied on Mr Modi and his government was that an army of 1000 people has been unleashed by them to abuse him on line. That is possibly the vainest statement of the year. It is no secret that Rahul is possibly one of the more trolled politicians in India and the reason is not BJP but his own foolishness in whatever he does or says. So where is the need for hiring a thousand people to do a job that millions of Indians do willingly for free. But then he won’t be what he is if he could recognise this fact about himself. As far as Mr Modi is concerned he normally has no time for Rahul Gandhi. Perhaps he believes in Proverb 26.4 of the Bible that says – ‘Don’t answer the foolish arguments of fools or you will become as foolish as they are.’

How foolish can foolish be? This is a question that has defied answers since the arrival of Rahul Gandhi on the Indian political scene. To his credit he pushes the foolishness bar each and every time he opens his mouth. He makes foolishness scale new highs each time. So today even foolishness itself does not know how foolish it can be. To Rahul Gandhi’s credit he seems to be beating foolishness at its own game of being foolish. That is no mean achievement for someone who perhaps had the most optimum political upbringing in the country. Rahul’s foolishness has touched new heights in his very first speech at Berkley; one only wonders where it will reach in next two weeks by the time his tour ends. Surely students at University of California, Berkeley would be none the wiser to understand India at 70: Reflections on the Path Forward from someone like Rahul Gandhi whose intellect can easily be fitted on the point of a needle with space to spare. Best of luck America, you asked for it and now you will get it and how!