The question is who will buy the ailing airline?

Air India has been in the news often in last few decades – mostly for the wrong reasons. Governments have come and gone but Air India remains where it always was – poorly managed and always in debt. The airline started off in 1932 under the TATA Group as a private carrier. In 1936 it was rechristened as Air India. It was acquired by the government in 1948 and the Maharaja was positioned as a mascot of developing India. Air India was the first Asian airline to induct a jet aircraft from Boeing in 1960. However it soon lost its sheen and character due to some very inept senior leadership (always on deputation) that invariably had no experience of the industry and a workforce that only looked to bleed the airline in terms of money and privileges. Trade and pilots unions always played havoc with efficiency and cost cutting measures that were so essential once Air India started facing competition – both local and international. Poor planning and inability to exercise proper cost control ensured that Air India was always on the lookout for a bailout package from the government year after year. The management always provided false assurances for a bright future after each fund infusion – alas the sun never shone on the Maharaja. In absence of any accountability the management continued to play this game and the government kept on infusing funds.

Air India’s current debt stands at nearly Rs. 54,000 crores. This despite the infusion of over Rs 24,000 crores between the period 2012 – 2016 as part of the Rs 30,231 crore bailout package promised by the government in 2011-12. Just to give a perspective the enterprise value of country’s largest airline Indigo was Rs. 30,690 crores as on 31 March 2016 and market cap of Jet Airways was Rs. 28,740 crores. It may also be prudent to mention that both these airlines enjoy a higher market share than Air India and Indigo has been making profits consistently over the last few years. This despite the fact that these airlines do not have some of the inherent advantages that Air India enjoys being a fully owned state entity. Air India has excess manpower whose wage levels are way higher than private airlines but productivity much lower.  Given this sorry state of affairs it is not surprising that the present government has taken a decision to sell Air India to private bidders – a decision that past governments shied away from despite the deep internal rot in the airline. 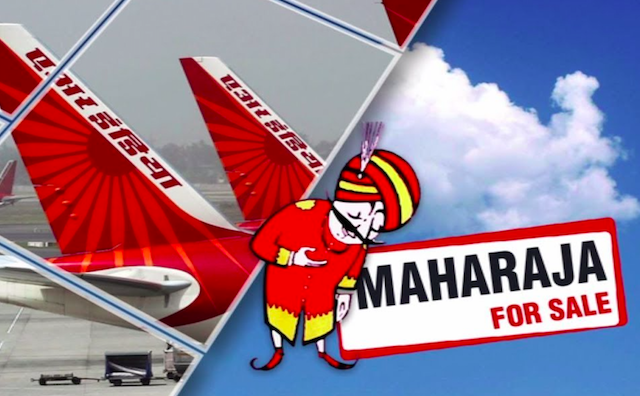 The question is who will buy the ailing airline? There are lot implications if Air India is sold lock stock and barrel as a single entity to any other existing airline. Some of these are:

In view of this it may be worthwhile to consider selling the air line in parts by following the principle – sum of parts is greater than the whole. For this it will be essential to break down the assets of the airline in saleable parts and ask for separate bids for each. This should help the government to attract more bidders as also generate greater revenues. It will also give all prospective buyers an opportunity to bid for parts of the whole pie that they may deem attractive and suitable for them. Amalgamation of assets and man power too would become easier for the buyer. The government could also consider loading each saleable part with part of the existing debt in an equitable manner based on proper diligence and expert advice.

The next question is how the air line can be divided into saleable parts. One can consider the following:

As far as the aircraft are concerned it may be prudent to pare the fleet before the selloff. All aircraft on lease could be considered for return and closure of the lease unless a buyer shows interests to take over the same. Buyers will have to be found for aircraft owned by the Air India and that will be a challenge since prospective buyers would keep their own product mix in mind. Fleet maintenance is a major issue with any airline and it will always have a bearing on which aircraft the airline buys. As an alternative it may be prudent for Air India to look for logistic companies who tend to buy older aircraft for their load carrying duties. This is a growing industry in India and there will always be buyers available if the price is right.

This may sound a bit difficult and tedious but in reality it is not so. All it needs is a few sane, sincere, honest and knowledgeable minds to study the issue and come out with a workable plan that can then be put in motion. Without a doubt the dividends to the government will be more than if the airline is sold as a whole. It may even be worthwhile to debate this methodology and understand its pros and cons. The powers to be should also not forget the amount of public money sunk in Air India over the years and therefore the need to get the best price from its sell off. Business decisions like this should be devoid of sentiments and nostalgia and instead be based on ensuring maximum returns.

It does look this time Air India’s luck has run out and it will definitely be on the chopping block – and rightly so. Unlike other public sector undertakings sale of Air India will be more complex, attract more public attention and followed by media relentlessly. The government should not succumb to any internal pressures of vested interests or false assurances of Air India management and trade unions to either postpone or defer the sale. It will be in the interest of the nation to finish this expeditiously in a fair and efficient manner.