Dharamshala: Himachal Pradesh Government has initiated an ambitious plan to farming community for adopting new cropping pattern in the state. Several flagship programmes have been implemented in agro-sector to promote vegetable cultivation particularly the off-season vegetables in the state.

The state has already earned a name as ‘the fruit bowl of the country’ and now, the state is fast emerging as a ‘Natural Glass House’ of the country in the production of vegetables, as the farming community has come forward to cultivate off-season vegetables in a big way. The vegetable crops are being grown in the state ranging from the Shiwalik foot hills to High Alpine Zone up to 4000 meters above sea level.

For ages, the main emphasis remained on cereal crops just to feed teeming millions, but with the concerted efforts of Agriculture Department and the State Government, thrust on providing subsidized materials to farmers, the vegetable farming has emerged as an alternative cash-crop in the state.

This hilly state is bestowed with congenial agro-climatic conditions and has enormous potential for the production of off-season vegetables like, tomato, capsicum, green peas, beans, cabbage, cauliflower and cucumber, which are successfully grown in the season when these are not available in plains. More over, the returns of off-season vegetable cultivation are very high as compared to traditional cereal crops. 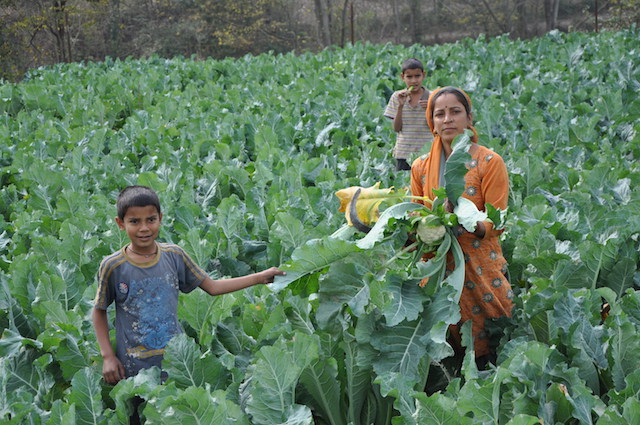 Emphasis has also been laid on diversification of crops and introduction of high yielding hybrids of vegetables along with popularization of micro irrigation system, organic farming and protected cultivation in order to achieve faster and inclusive growth in agriculture sector particularly the vegetable production. So far, 3050 poly houses covering an area of 5.50 lakh square meter have been set up under ‘Dr. Y.S. Parmar Kisan Swarojgar Yojana’. For improvement the quality of production, about 40 thousand farmers have come forward for adopting organic farming in the state.

With a view to provide better planting material and vegetable seedling, a ‘Centre of Excellence’ for vegetable nursery production has been established at Jubberhati in Shimla district and two more such centers are being set–up at Solan and Mandi districts.

A hardworking farming community and conducive policy frame work of the state government has paved the way for diversification of crops, thereby transforming the rural economy and economic growth of the state, as the agriculture sector provides direct employment to about 62 percent of the main working force and, also contributing about 10 percent of the total state domestic product in the state.