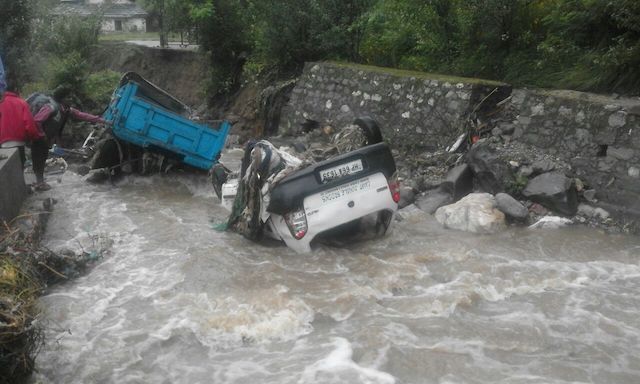 Torrential rains in many parts of the district have triggered massive landslides and blocked roads. The heavy rainfall have created flash flood-like conditions, washing away large swathes of agricultural land. However, no loss of human life has been reported.

Joginder Rana, a resident of Karjan village recalled that similar floods had also occurred in the year 1995. Natural streams getting blocked at road culverts were often found to be responsible for triggering small scale flash floods, he said
The natural drainage systems flowing in Nallah’s was also found choked at many places because of unplanned construction as many multi-storey  buildings had come up in village which had either turned the course of the natural flow or the muck and debris from the new constructions was often dumped in the Nallah’s. During a time of heavy rains,  much damage is caused because of the fast flowing water, said Rana.
Balbir Chand Rana, president of Karjan panchayat said that the administration had extended an immediate relief of  Rs 10,000 each to the effected  families. The cost of damage was still to be calculated, he said.