In an another achievement for HPCA , a maiden cricket stadium in shimla district at GUMMA was inaugurated and dedicated to the people of the state today ,the 1st of June 2017.

Anurag thakur (BJP MP) and Ex president BCCI inaugurated the facility in presence of Sh Virender Kashyap (Another BJP MP) , Narender Bragta Ex minister of Himachal , Bittu Verma, President and members of the Shimla District Cricket association.The ground at Gumma has been built at an altitude of 5000 ft above sea level around the areas famous for apple and vegetable cultivation. 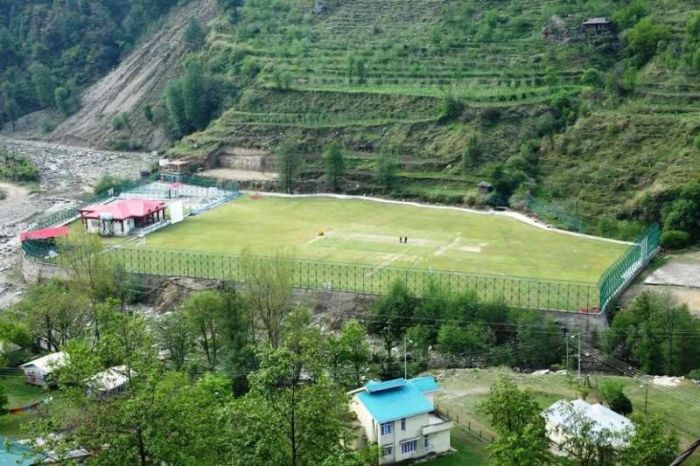 President Shimla District Cricket AssociationSDCA, Surinder Thakur said , “we are very grateful to HPCA and its inspirational leader Sh Anurag Thakur who supported us with all his might and heart in creating this facility .”
Anurag Thakur congratulated the team of HPCA and SDCA for putting up this lovely facility in the hinterland of Shimla. He said, “ we have always worked for the betterment of the game players and infrastructure despite the numerous odds and indifferent attitude of the government, we have been instrumental in creating world class infrastructure in a short span of 15 years for small hill state.”

Anuraag further added , “Sports as such can lead the youth of the nation into the right direction and if promoted in the right manner by the governments it would channelize their energies. I am saddened to see the youth of the state into drugs and other illegal mafia activities and would urge them to take up sports which can be the harbinger of change.”

He also urged the HPCA to dedicate the pavilion in the newly built stadium in the name of Sushma Verma, Indian Women Cricketer who hails from shimla district and is playing for the country in honor of the girl child . This would inspire other girls and youth to take up sports and develop an healthy culture for the future generations.

Anuraag Thakur Said, “HPCA has been consistently working for creating world class infrastructure in our small hill state and this is a small step in that direction.We have already built good stadiums and infrastructure in other districts of the state and would work steadily on our commitment towards one world class stadium in each district .This facility dedicated to the upper shimla area which has lot of hidden talent and potential. With this facility coming up in the hinterland of shimla district we are hoping that good talent will be scouted from the area and they will get an arena to showcase their talent in a world class infrastructure and would surely pave the way for them to get into the national team and don the official jersey .”

The HPCA facility at gumma has a pavillion , dressing rooms , practise area , 4 turf wickets, and an outfield where class 1 bermuda grass has been specially planted to give the players an international playing experience .

On this occasion Thakur requested theCongress lead Himahal state government and sports authorities to grant HPCA a suitable piece of land around Shimla so that the association can create another international stadium as beautiful and picturesque as Dharamshala.