New Delhi:  The State Bank of India (SBI) today announced financing of rooftop solar projects worth Rs. 400 crore, with private developers. This would add at least 100 MW of rooftop solar capacity to the grid, and is a significant step towards meeting the Government of India’s target for 40 GW of rooftop solar installations.

SBI has availed loan of USD 625 million from the World Bank for on-lending to viable Grid-Connected Rooftop Solar PV (GRPV) projects undertaken by PV developers/aggregators and end-users, for installation of rooftop solar systems on the rooftops of commercial, institutional and industrial buildings. Implementation of the program by SBI will support the installation of more than 600 MW of rooftop solar capacity.  With the World Bank funded capacity development program, SBI is making efforts to expand and incentivize the market for rooftop solar power by way of low cost financing.  Financing is being provided to those with sound technical capacity, relevant experience, and creditworthiness, meeting SBI standards.

Developers that the SBI will be financing under this Program include Azure Power, Amplus, and Cleanmax amongst others. The capacity of the projects and programs financed range from 25kWp to 16MW. 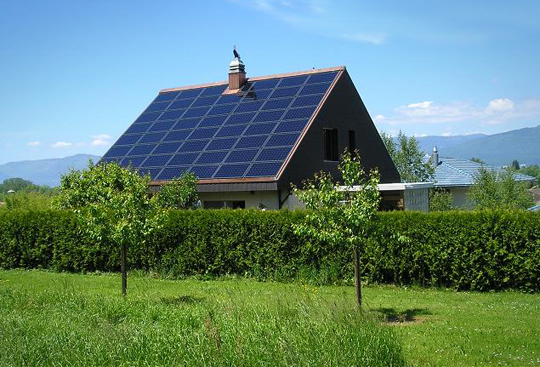 “As the largest Bank in India, SBI is committed to finance renewable energy projects to support the Government of India in realising its renewable energy targets. With the World Bank loan, SBI aims at developing the nascent rooftop solar market.  As a tropical country, India has a huge potential to be the leader in the rooftop solar space,” said Karnam Sekar, Deputy Managing Director, SBI.

“In order to accelerate demand for rooftop solar systems in the market, SBI has developed financing models that will provide loans at a very competitive pricing with long tenor. Several capacity building measures and awareness programs are being undertaken to sensitize operating functionaries.  So far, SBI has sanctioned GRPV projects with aggregate capacity of 100 MW, and proposals are in the pipeline with aggregate capacity of around 125 MW. Going forward, off-take of loan would accelerate as awareness builds up in the market for grid-connected solar rooftop,” he added.

Aided by government policy and declining costs, rooftop solar has the potential to transform the energy sector.

“We are very pleased that SBI has achieved this first important milestone, of financing 100 MW of solar PV capacity to solar. The World Bank is strongly supportive of the government’s plans to harness this potential. Solar PV will not only improve access to electricity, but it will do so in a manner that avoids the environmental impacts of other traditional electricity sources. Through this project and others like it, tens of millions of electricity customers will eventually be able to generate part of their own electricity needs from one of the cleanest sources of energy available,” said Riccardo Puliti, Senior Director, World Bank.

India is one of the lowest per capita consumers of electricity in the world. Over 200 million people remain unconnected to the electricity grid, and those who are, continue to face frequent disruptions. Power shortages also affect industrial output with many industries and manufacturers relying on expensive and polluting diesel-based back-up power supplies.

The World Bank-Clean Technology Fund (CTF) loan will support a number of solar PV business models, to expand the reach of rooftop PV systems to a variety of customer groups. A range of options available to investors under the SBI Rooftop PV Program will include third-party ownership, leasing, rooftop rental, as well as direct end-user ownership.

The World Bank is also providing a Global Environment Facility (GEF) grant to support the overall capacity development of the sector.  This grant will (i) support an innovative risk mitigation mechanism to enable lending to small and medium enterprises (SME), commercial and industrial customers for GRPV, and (ii) to support strengthening of the investment climate and capacity building of the main stakeholders involved in the expansion of GRPV.