Manali: Misuse of a limited number of permits for Rohtang Pass has found a lot of tourists headed for Hallan II, a quiet hamlet set amidst very scenic surroundings near Manali.

It is only 45 km from Manali and can be easily reached. Most tourists who fails to reach Rohtang due non availability of permits have discovered this other spot to satisfy their quest for being close proximity of summer snow. Snow in this valley, a little above the village, stays around till end of July. 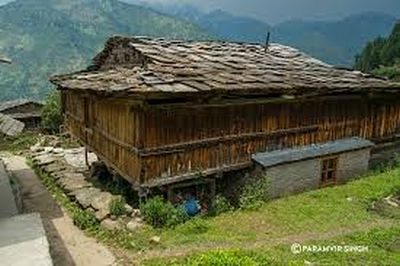 The damaged patches in the area, which experiences frequent avalanches during winter months, have been repaired by the villagers. The area is easily approachable but the tourists need to trek for about 20 minutes to reach the snowline. The villagers have also built a path and set up small bridges for the convenience of the tourists.

“We have formed a committee to serve the purpose in better way. The youths of the village and nearby areas have got a self-employment option,” president of the committee Gayatri Dutt said. He added that the road is built by a private hydel project and the management is cooperating with them.

“We are repairing the road. Small bridges have been established over the rivulets. A number of tourists are reaching here every day,” said Dutt.

The members of the committee have collected funds for maintenance of the road and the tourist spot. The local youths are regulating traffic and guiding tourists to the snow point. The committee is monitoring whether tourists are not being overcharged and NGT directions are being followed.

They have also added activities like skiing and tube sliding among others which are not allowed at Rohtang. While only 1,200 tourist vehicles are permitted to Rohtang every day, Hallan II has no such restriction. Tourists do not need to pay any permit and congestion charges of Rs 550. Also, unlike Rohtang pass, the road to this new destination is congestion-free.

Its prudent to mentation here that Manali’s Hallan II is a small, ancient village in the Kullu-Manali valley that is at an altitude of 6000 ft but provides very panoramic views of a well preserved green and snowy picturesque landscape.

The stone houses reflecting the vintage Himachali architecture and paved paths of this rural area of Manali is so beautiful that tourists once there never regret even once for coming here instead of visiting Rohtang Pass. The people of Halan II are purely attached to their ancient backgrounds and are safeguarded their surroundings so well that they look untouched even in today’s date.

Arun Kumar, a tourist from Delhi spoke to Hill Post about his experience of visiting Hallan II. “We were welcomed by the locals of the village, who had arranged everything for us. It was truly a very humbling and nice experience to get a taste of true Himachali culture in one single day, he said.