Manali:  Himachal taxi union Manali submitted a memorandum to SDM Manali to open up Marhi for tourists otherwise they will go for Chakka jam and allow no vehicle ply on the roads in Manali.

Raj Kumar Dogra, president of the Him-aanchal Taxi Operators Union while submitting the memorandum to SDM, Manali said if the administration fails to fulfill their demands by tomorrow evening  they have no choice other than going for chakka jam in Manali. The call was supported by Auto union, Bus union and Hotelier association of Manali.

Earlier, in the day today the taxi union of Manali stopped their services and went of road.

Hundreds of tourists who came to Manali to escape the unbearable heat were to put to inconvenience here today as taxi drivers went on a day-long strike.

More than 2,000 taxis remained off the roads to protest the local administration’s decision restricting the entry of tourist vehicles beyond Gulaba. 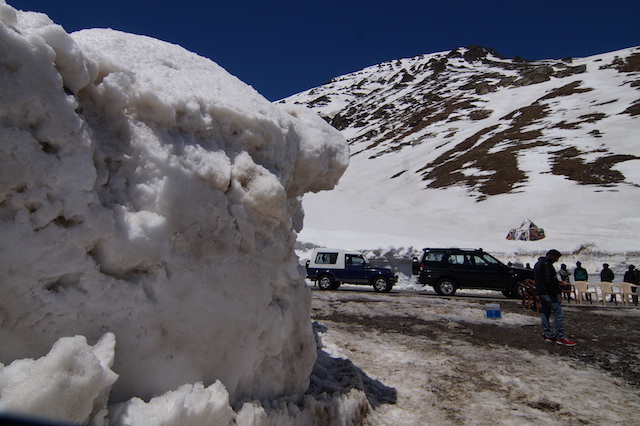 The Gulaba is 26 Kms from here on the way to the Rohtang Pass. Raj Kumar Dogra, president of the Him-aanchal Taxi Operators Union, told Hillpost that  the BRO (Border Roads Organisation) had cleared the snow from Manali to  the Rohtang Pass in the last week of April and the administration assured that the tourist vehicles bound for the pass would be allowed in the first week of May.

“Till date tourists are not allowed to go beyond Gulaba by the adimaration” Dogra added.

“It is the snow that is only attracting the tourists visiting Manali. At Gulaba the snow has melted. We are requesting the administration to allow the tourist vehicles to reach up to Marhi, which is just eight km ahead of Gulaba, so that the tourists can enjoy the snow there,” Dogra added.

Auto and private mini bus operators of Manali have also joined the protest.

It is prudent to mention here that the picturesque Rohtang Pass, located in the Pir Panjal range of the Himalayas 52 km from here, is a major attraction for both domestic and foreign tourists. Till mid-June, it remains covered with snow.

According to sources currently vehicles carrying locals and government officials, who are bound for Lahaul-Spiti district are allowed to ply across the Rohtang Pass, located at an altitude of 13,050 feet in Kullu district.