Horses and the IAS have never been on the same page or the same paddock, as it were. Their relationship is somewhat like that of Donald Trump and Kim Jong Un: wary apprehension on the one side and undisguised contempt on the other. Until the 1980’s horse riding was compulsory for all IAS probationers incarcerated in the Lal Bahadur Shastri National Academy of Administration at Mussoorie, and if they failed in this activity they would remain Deputy Secretaries for life, with no parole. The “raison d’etre” for imposing such a vigorous activity on people whose greatest physical exertion in later years would comprise of nothing more than bending over backwards (the “sir-namaskar aasan”) or brushing files under the carpet, was aptly summed up by Mrs. Indira Gandhi when some stout probationers represented to her that the sport should be made optional. She is reported to have said: “An officer who cannot control a horse cannot control a crowd.”

And so, since no one, not even a pedigreed mule from Rohtak, argued with Mrs. Gandhi, uncounted generations of probationers were condemned to throbbing posteriors, cracked skulls and hyphenated legs which would have made any Shakespearean buff cry out in delight- “Yonder cometh a bloke in parenthesis !” We also acquired a healthy respect for these formidable quadrupeds, standing six feet at the fetters, loaned to the Academy by the Indian Military Academy or the Army Remount Corps and retaining all the contempt which the Army has for bureaucrats, even the budding ones. Riding became the biggest obsession in the Academy, second only to the urgent need to identify potential spouses from those states where one wanted an allotment but had not succeeded. In the process it threw up a whole collage of personalities, incidents and tales that we can now look back on with amusement, confident in the knowledge that our days of crowd and horse control are now well behind us.

Take, for instance, Hazari Singh a retired Army Havildar, half dragon and half bear trap, our riding instructor. His avowed mission in life was to demonstrate that IAS probationers were the lowest form of invertebrates, and that it was a pure aberration in the Darwinian law of Natural Selection that such genetic mutants should be astride an animal as splendid as a horse. He lost no opportunity to constantly reaffirm this to us. If someone handled a horse roughly, Hazari Singh would let out a roar in a voice that could be heard in Dehra Doon: “Aaram se, saar, that is an expensive animal, not some cheap trash selected by the UPSC!”

For the smart alecks amongst us he had a trick up his sleeve: an eight year old, midnight black mare named Jaya whose memory, even today, induces incontinence among hard boiled Collectors and deep fried Secretaries. If Hazari Singh perceived any one of us to be a bigger streptococcus than normal, that lost soul was ordered to mount Jaya. Thereafter that poor sod was like clay, and Jaya the potter: she could (with Hazari Singh’s fond blessings, of course) do anything with him as she pleased, for she had a mind that was immutable, even by the standards of the female of the species. Madhavan mounted Jaya one day – and disappeared for two whole days! Even today, well into his dotage, he becomes incoherent when asked where Jaya had taken him.

Varun Maira, who possessed a remarkable resemblance to a sack of potatoes, was once ordered to do a three feet jump on Jaya. The lady preferred carrots to potatoes, and at the last possible moment when Varun, like a lumbering 747 had committed himself to take-off, Jaya stopped! Varun continued over the jump in a perfect parabola, sans Jaya, and landed heavily on his head. Any apprehensions of a possible brain injury were dispelled by a smirking Hazari Singh: “No problem, saab, there is nothing inside that head that can be damaged!” He proved to be extremely prescient, I must admit, for Varun’s subsequent career graph has been impressive – he retired as Chief Secretary, a post in which, as we all know, brains are considered to be a liability!

About that time I had, with great difficulty, persuaded a comely female in Lucknow to agree to marry me. It was touch and go and therefore it was incumbent upon me to go to Lucknow every couple of months to ensure that she didn’t change her mind. It was not easy to get leave unless one obtained a medical certificate from the Doc. On one such occasion I showed the Doc some bruises and cuts on my knee and asked for three days’ leave over the weekend. “How did you get these ?” inquired the Doctor. 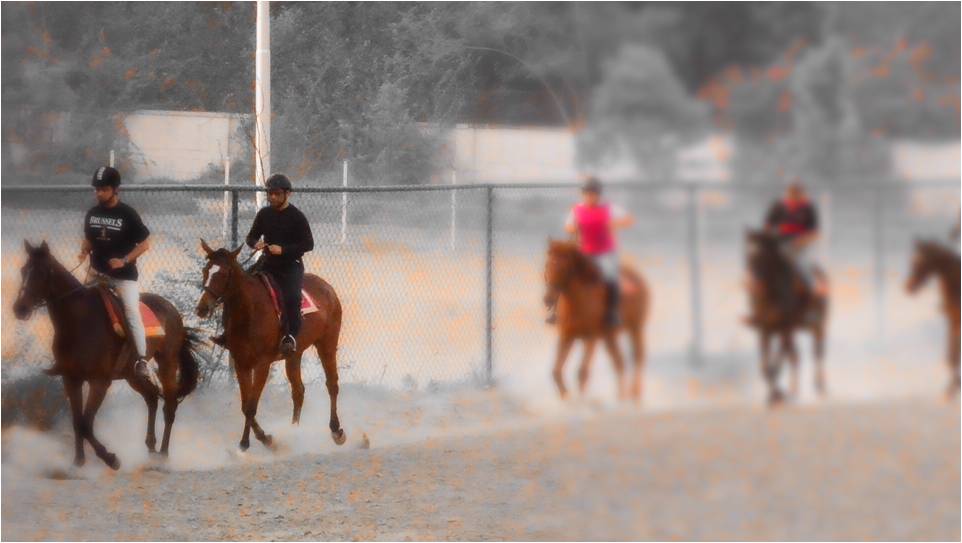 I had acquired them while trying to scale the wall of the Ladies’ Block the previous night but honesty was certainly not the best policy at the moment. “I fell off a horse, sir,” I replied, in the tone of that stupid English King who lost his kingdom for doing something similar.

“Ah !” said the medico with a glint in his eye, “the riding ground is swarming with germs (I don’t think he meant us probationers). You should immediately have three tetanus shots over the next three days. No leave, I’m afraid, can’t take a chance.” In those primeval days AT shots were given on the posterior, with a needle as thick as an RSS lathi, and so I spent the weekend lying on my stomach. Fortunately, my fiancee didn’t change her mind, though now she wishes she had.

And finally, there was George Mehra. He was straight out of a Zane Grey western, always with a cigar stuck in his mouth, and when he walked past you one could distinctly hear the testosterone sloshing around inside him. George was/is a satyr – half horse and half man – and loved riding: he was the only one among us who was on first name terms with Jaya. He spent eighteen hours a day in the saddle, even taking short naps there. Hazari Singh gave him the supreme compliment by announcing that he was a mis-fit in the IAS! For once, though, he was wrong. In later years George was to become famous when, as Collector of a notorious district, he personally beat up a politician on a main road for passing comments about his wife. Nobody tangled with him for the next thirty years after that . Maybe Mrs. Gandhi was right, after all ?