Shimla: SJVN Limited, the public sector power generation company, paid out an interim dividend of Rs 237.38 crore to the state government here at a simple ceremony.

With Himachal Pradesh holding 25.51% equity in the company, this is the highest ever dividend that SJVN has ever paid to the state for its share in the joint venture company with the union government. 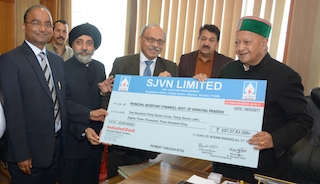 Of the total Rs 930.74 crore declared as interim dividend at a rate of Rs 2.25 per share by the SJVN board, the union  government has already been paid Rs 600 crore for its 64.46 crore share in the company.

The balance of 10% shares is held by the public.

The dividend cheque was handed over to the Chief Minister Virbhadra Singh by RN Misra CMD of SJVN. On this occasion  A.S. Bindra, Director (Finance) N.L. Sharma Director (Personnel) and other senior officers of SJVN were also present.