Given the selfish and chameleon nature of Indian political parties will always find a willing partner to form coalition governments.

It is an established fact that political rhetoric has touched new lows on a regular basis in last three years since the run up to last general elections. Call it the Modi Effect or term it as Opposition Frustration, either way the spirit of election campaigning is headed only one way and it is not something that any politician can be proud of. Without a doubt the opposition will lay the blame predominantly on Mr Modi for vitiating the atmosphere with his hard hitting remarks during his various speeches in last three years. Not to be outdone, BJP in turn has sufficient ammunition to pin the opposition down for their role in going a few notches even below the level that they attribute to BJP or its leaders. Given the current scenario neither side is likely to budge or do a course correction for the better.

The current campaign in Uttar Pradesh (UP) has seen some really poor rhetoric from all concerned. Mr Modi’s charge on the current Smajwadi Party (SP) government of using basic needs like power supply to appease communities did not please the Chief Minister despite the fact that what Mr Modi said was directly from a report prepared by an independent company, REC Ltd, in conjunction with the state government. To that extent the charge was fully substantiated and irrefutable. However the Chief Minister reacted by terming people from Gujarat as ‘gadhas’ (donkeys) and advising Amitabh Bachan to stop promoting ‘gadhas’ from Gujarat in advertisements. That certainly was as low as it can get. But given the quality of leadership at SP, no low is low enough as was proved by Mr Rajinder Chowdhury, a Minister in SP government, when he called Mr Modi and Mr Amit Shah as terrorists. More often than not, Mr Modi gets under the skin of his opponents that unsettles them and many of them do tend to lose their sanity at times.

There is no doubt that Mr Modi has away with words that makes him an outstanding speaker at rallies where he establishes a huge connect with the audience. He knows how to raise passions in the masses and understands what will excite them. No opposition leader, including the fiery Mamta Banerjee, can match him in this regard. It is equally true that his speeches are measured in tone and content that can rarely be termed as base. One may use the terms ‘hard hitting’ or ‘passion rousing’ or ‘for the gallery’ but there is no baseness for the sake of being base. If he makes any personal references they are cleverly masked. Most of his direct attacks on individuals have come only after those individual shave crossed the line in their statements or speeches with respect to the persona of Mr Modi or his government. The recent raincoat jibe at Dr Manmohan Singh came only after the erstwhile Prime Minister referred to demonetisation as organised loot and legalised plunder. In short one may say that the good old doctor invited trouble and Mr Modi, not being one who shuns a good fight, gave it to him where it hurt the most. Sonia Gandhi too had invited his wrath a few years ago when she called him ‘maut ka saudagar’. To his credit Mr Modi has rarely initiated a personal attack on any of his opponents.

This article is not about justifying what Mr Modi has said or may say in future. In fact the point being made here is that irrespective of his obvious ability of maligning the opposition, it is time Mr Modi puts himself beyond all this petty squabbling and presents himself as a more dignified statesman. He can easily leave such barbs to be traded by others in his party while he disassociates himself from all this baseness. The nation has given him a huge mandate and he must honour it by rising above all this and placing his persona at a pedestal that should be the envy of his opponents. Last but not the least, local politicians from same region exchanging slurs or barbs is one thing, but when a local leader takes a pot shot at the Prime Minister, it is an insult to the whole nation. It is important for the Prime Minister to remember this. 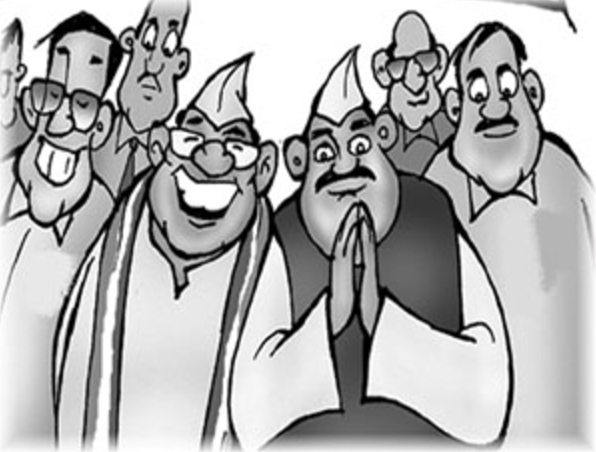 There is no doubt that the Prime Minister is the face of BJP but it is essential that it should be so at the national level. For regional politics he must not become the face of BJP as it will be counterproductive in the long run. There is an imperative need to build local regional satraps in all states with whom the state can relate. A strong local leader in conjunction with a strong central leader is what the equation should be in each state for a national political party. Congress had this going till early seventies but after the rise of Indira Gandhi, local leadership in states lost its place and individuality as centre became all powerful. No wonder Congress is in dire states today. BJP too seems to be moving in the same direction that could hurt them badly in the years to come. Unlike Congress party, BJP does not have a family legacy or the need to protect family interests. This approach has weakened the Congress party to no end; unfortunately political sycophancy in the party ensures that senior leaders do nothing to correct the problem. While BJP may not have similar issues, it should not allow personalities at the centre to dwarf everyone else in the party.

It is indeed surprising that in a key state like UP, BJP has no local face that can be seen as a challenge to Mayawati of BSP or Ahkilesh Yadav of SP. Add to it the fact that barring Mr Modi and Mr Amit Shah, the party president, no other senior leader is really part of the campaign. One really wonders why Mr Raj Nath Singh, perhaps the tallest BJP leader from UP, is not part of the team? Whatever be the impact of Mr Modi, no one can deny the fact that both Mr Modi and Mr Shah are seen as outsiders in the state. Will BJP suffer in UP due to this obvious shortcoming? In all probability it will despite the near clean sweep it had in 2014 for the national elections in the state. One should not forget that Indian voters have separate yardsticks for state and national elections as has been proved time and again. UP, Bihar and Delhi have shown as much in the past. There is no reason why it should be different this time.

It is a pity that BJP President Mr Amit Shah has not really strengthened the state units by identifying and developing local leadership. UP is a prime example of this failure. Having hundreds of pracharaks and party workers on ground is not necessarily a good recipe for winning all elections. Perhaps when Mr Modi was contesting the general election in 2014 this strategy was essential since projecting Mr Modi as a national leader in every nook and corner of the country was of prime importance. But when it comes to state elections or other local body elections it is important to have strength from within the state or the local area. This is a time tested axiomatic truth. The successes of Vasundhra Raje in Rajasthan, Manohar Parikar in Goa and Shivraj Singh Chauhan in Madhya Pradesh validate this theory. Gujarat, Jharkhand and Chhattisgarh too have followed the same logic. On the other hand BJP’s poor showing in Bihar and Delhi state elections in last two years can be attributed to lack of such strengths at state level. It is no secret that BJP has not been in contention for decades in states like West Bengal, Tamil Nadu, Telangana, Andhra Pradesh, Kerala, Tripura, Orissa and even Punjab due to lack of local leadership and organisational strengths. No central leader, however strong he may be, can make a major dent on his own in any state that is bereft of strong local leadership.

The results in UP, Uttrakhand, Manipur, Goa and Punjab will be out in next few weeks. The most eagerly awaited results will be from UP since that state will decide the future of BJP. It is difficult to imagine BJP securing a majority in the state on its own. The question is can it come out as the single largest party with at least 150 plus seats? If that happens, the party would have redeemed a lot of its lost prestige in the state. Given the selfish and chameleon like nature of Indian political parties, it will always find a willing partner to form a coalition government. That should give the party a base to strengthen its hold on the state and establish its presence for years to come with some astute planning and effective governance. Without a doubt it will also add to its strength to bid for power at the national level in the next general elections. However if it remains a marginal player in the state as it is today, then it will find the going very tough in 2019 at the centre too. Unfortunately it will have no one to blame but itself.