Poll strategies today resemble corporate marketing strategies: there is the 'product launch' (announcing the candidate with much fan fare and public rallies); assessments of market shares (vote shares); brand ambassadors (mainly Bollywood celebrities inducted into various parties, though Mr. Modi is himself emerging as the most sought after ambassador of his party post PayTM and KVIC); discounts and cash-back incentives (freebies, farm loan waivers, smart phones and Amma canteens).

Politics and Business are meant to be two different streams of social activity, the former based on ideology (communism, socialism, liberalism, fascism) and the latter on profit (capitalism). The former serves public interests and the latter the individual interest. In India, however, the lines between the two have increasingly got blurred to the point where they have practically coalesced into each other, and it is now difficult to distinguish between the one and the other. Consider the evidence.

All political parties (except perhaps the Communists, and they don’t really matter any more) are run like family owned businesses and dynastic succession is the norm – in this respect there is really no difference between the Ambanis and the Congress, or between India Cements and the BSP, or between the Birlas and the RJD and so on. Once in a while the carefully planned succession goes awry when other ‘shareholders’ get into the act, but even here the ensuing battles are very similar -witness what is playing out in Tata Sons and the Samajwadi Party: the ordained successor is sought to be ousted by an ageing patriarch but refuses to go quietly. Individual legislators – MPs and MLAs – behave like business franchisees using the trade mark of their parties to raise funds for the mother ship and in turn being accommodated by the issue of preferential shares (in the form of tickets for elections) at huge premiums for their kith and kin. They then become like Directors of a company, exercising a complete stranglehold on the party, or the government if they happen to be in power: most of us have given up even counting how many members of the first families are Ministers in the governments of the Samajwadi (UP), Akali Dal (Punjab) and RJD (Bihar) parties. The BJP doesn’t – as yet – fall into this genus, but it does represent another corporate strategy: a hostile take over by a corporate raider, so successfully executed by Mr. Modi in 2014. 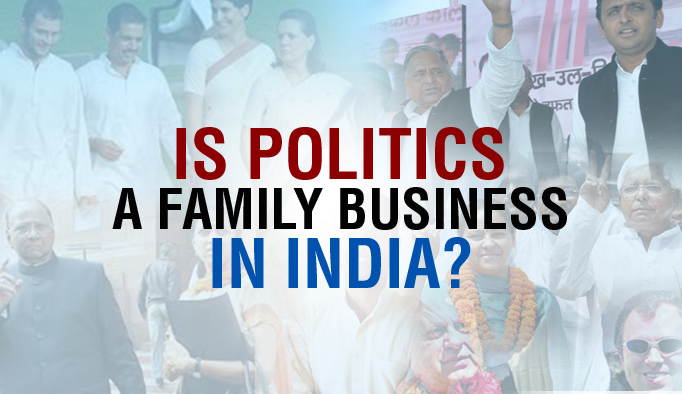 Monetary profit lies at the core of politics in India today, as it does at the center of business. Here, however, the former has a distinct advantage: whereas companies have to declare their incomes truthfully and pay tax on them, political parties are exempted from both. This strange concession partly explains why more and more industrialists are gravitating towards politics, and why your average Parliamentarian is a crorepati many times over, with his fingers and toes in many business pies. Shell companies are no longer the exclusive preserve of business. There are now hundreds of ‘shell’ political parties! The Election Commission itself has stated that more than 1900 parties are registered with it but only about 67 contest elections. The remaining ones are just shell outfits created to launder money. A recent expose by TIMES NOW reveals the BSP is allegedly involved in parking Rs. 1300 crores of unaccounted ‘profits’ in a maze of shell companies in the company of other politicians like Mr. Bhujbal. This is just the tip of the proverbial iceberg: a Hindustan Times report of the 11th of January has revealed that out of 10.26 lakh entities registered with the ROC (Registrar of Companies) as many as 1.33 lakh were mere ‘Drop Box’ companies in Kolkatta and Delhi alone! How many have links to political parties will come out only after the investigations into the demonetisation evasion exercise is completed but it is amply clear that political parties have substantially embraced this corporate strategy of money laundering. That they have mastered it is amply demonstrated by other sting operations by INDIA TODAY TV exposing office bearers of other parties offering to ‘exchange’ banned currency in unlimited amounts for a hefty commission.

Corporate management is not elected, it is nominated by the shareholders. You would expect that political parties in a democracy would elect their office bearers, would you not? Perish the thought. Not only have they adopted the corporate nomination route, they have in fact gone one better – only the founding family (not all shareholders) get to make the nominations. I cannot think of even one national or major regional party where this is not true (again, barring the Communists, but they too have a very limited gene pool). Even the newer political start-ups like The Aam Aadmi Party follow this model. The BJP, however, appears to have discarded this model and has consigned its founders either to mythology or to the Marg Darshak Mandal; it appears to be forging a new template, a kind of diarchy, but its final contours would be clear only after the 2019 general elections.

Poll strategies today resemble corporate marketing strategies: there is the ‘product launch’ (announcing the candidate with much fan fare and public rallies); assessments of market shares (vote shares); brand ambassadors (mainly Bollywood celebrities inducted into various parties, though Mr. Modi is himself emerging as the most sought after ambassador of his party post PayTM and KVIC); discounts and cash-back incentives (freebies, farm loan waivers, smart phones and Amma canteens). The only difference is that if the product you paid for turns out to be sub-standard (as it usually does) the unfortunate voter cannot have recourse to the Consumer forum.

The one corporate embellishment that political parties lacked was the institution of the professional ‘Consultant’, a sine qua non at Board meetings. Efforts to rectify this shortcoming had started as early as the Nira Radia days, but it is only now that this vital strategic tool has been acquired. The arrival of Mr. Prashant Kishore with his 200 strong turn-key organisation and a 2/2 strike average in winning elections completes the corporatisation of Indian politics. If he is able to deliver even 50 seats to the Congress in the coming elections in UP, then the dye will be cast, and we can witness an explosion of similar outfits to match the surging numbers of psephologists.

If this trend continues then we may as well wind up the Election Commission and merge it with either the Company Law Board or the Registrar of Companies. Either that or we can get serious about electoral reforms.