People visiting high altitude water bodies for religious yatras and nomadic shepherds can be seen kissing the meadows while collecting this lichen; it finds prized application in the treatment of skin diseases, especially for burn scars.

It is commonly known by the popular name of ‘White Worm Lichen’, however, it is locally known as Heun Shelih (meaning the cooling effect of snow) in the Dodra Kwar region of Shimla district and as Ragas Dar in the neighbouring region of Uttarakhand. It comes with the botanical name of Thamnolia vermicularis (Sw.) Ach. ex Schaerer, belonging to the ICMADOPHILACEAE family, which contains about 6 genera and 58 species worldwide. 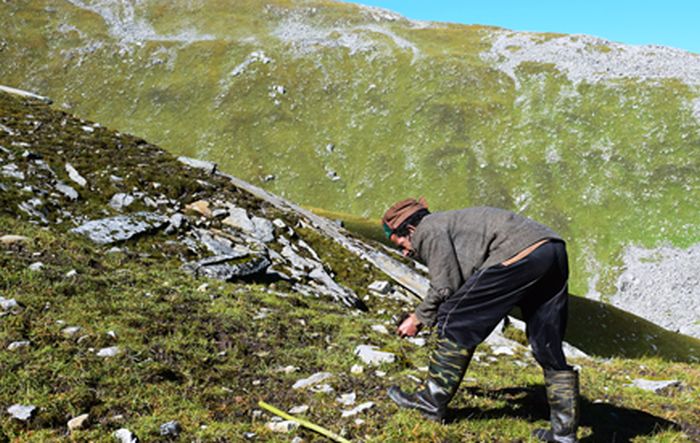 This high alpine lichen is basically terrestrial in habit, spreading on the high alpine meadows above 4200 m, in close proximity to the permanent snowline. However, the locals are of the belief that it is something heavenly, brought down by the snow. The fruiting body is white like snow (thus the name heun shali – ‘heun’ meaning snow and ‘sheli’ meaning cold) on the upper surface and dark grey or greyish black from the underside. 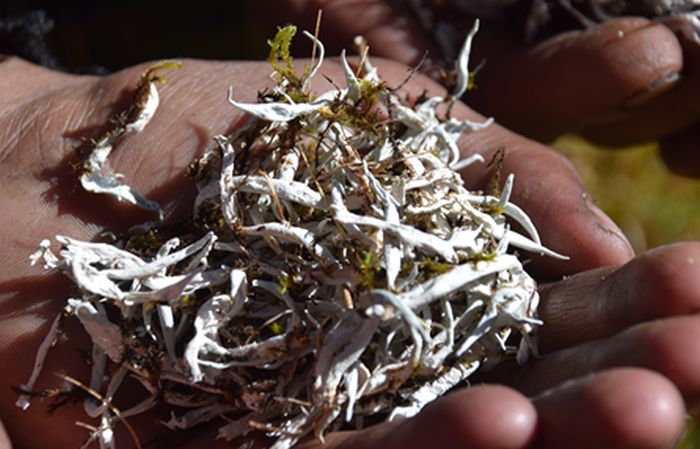 The thalli of this fruticose (club like) lichen are di-trichomously branched with abruptly pointed ends. It is not very common and is found occasionally in patches on the moist alpine slopes near the snowline between 4200-5500 m asl, almost on all continents except Africa and Antartica. This species grows on varied habitats, from bare, open gravels to rich moist, mossy thickets among the dwarf Salix and heaths. It is also reported from the arctic alpines and tundras on frost boils too. 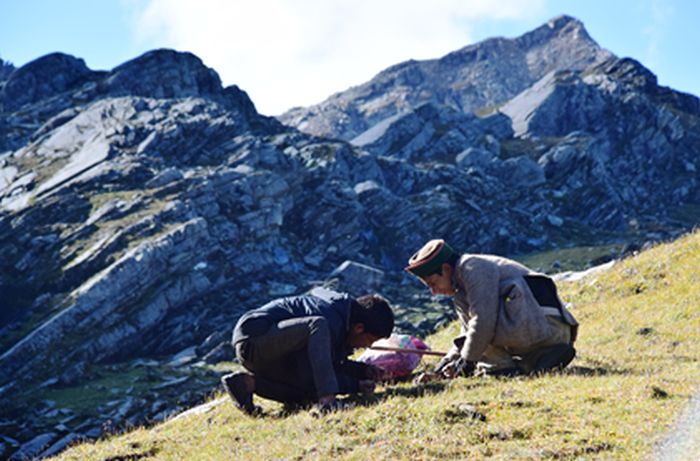 People visiting high altitude water bodies for religious yatras and nomadic shepherds can be seen kissing the meadows while collecting this lichen; it finds prized application in the treatment of skin diseases, especially for burn scars. Globally, too this lichen has found great ethnic usage. The faunal species in this high alpine environment too benefits from this lichen; besides the wild sheep feeding on it, most birds also use this soft lichen for preparing their nests – a case of a healthy ecosystem.

Surprisingly, not many know about this wonderful resource; it is time we all should document and spread the immense benefits of such natural healers and put in efforts to study and protect their habitats.

So far there is no immediate threat to this resource; however we must understand that this group (Lichens) is very sensitive to temperature and with the global rise in temperature, it would be amongst the first to be affected. However, on a global scale, there is sufficient evidence coming forth that indicates eminent threat to the high montane flora and also now it is generally being accepted that the global extent of Thamnolia vermicularis has begun to reduce.

Thus, these lichens being very sensitive to environmental disturbances could be a tool for assessing the ozone depletion and the emerging trends in global warming.