Shimla: Finally the dream of a white Christmas in Shimla turned into a reality as snowfall started at 8 am today in the hill town. In upper areas of the state however the snow had started intermittently at midnight. It was a pleasant delight for thousands of tourists, who had come to Shimla for Christmas holidays, as they woke up to see snow flakes falling outside.

It is after many years that Shimla town is experiencing a white Christmas. The last time it snowed for Christmas was in 1991. 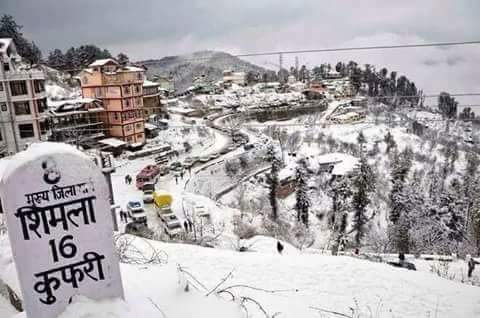 Since the snowfall is intermittent in the town, tourists are rushing to higher altitude areas like Kufri which is 16 kms away. The Jakhu hill above the ridge is giving a pleasant look with snow covered trees.

The snowfall had started intermittently at higher altitude hills of Himachal in the mid of night resulting in a thick blanket of snow while rainfall is being experienced in lower areas resulting in drastic fall in temperature to 1 degree and below in many hill town like Kullu, Manali, Chamba, Kinnaur etc.

This has broken the long spell of four months of dry winter which had perturbed the agriculturist and horticulturalists as well.  According to the Met Department the spell is likely to continue during the coming 24 hours.