Shimla:  Noted educationist Yogendra Yadav and renown Lawyer Prashant Bhushan and Professor Anand,  who have floated the political outfit Swaraj Party of India, while announcing the formation of a state unit for Himachal Pradesh on Sunday state here that they would focus upon the issue of agrarian crisis, corruption, onslaught on education system and communal tension as these issues were the burning problems in the country .

Bhushan and Yadav, who were expelled from Aam Aadmi Party, had  announced the formation of  Swaraj Abhiyan Party of India on October 2, the birth anniversary of Mahatma Gandhi.

Giving details about the outfit and its agenda, Bhushan said that they had already applied for  registration of a party. He said Swaraj Abhiyan was already fighting for cause of the peasantry.

The Supreme Court on Monday is to hear a public interest litigation (PIL)  in which seven state has been made party for non-compliance of court order about releasing sufficient water for  agriculture purposes,” said Bhushan. 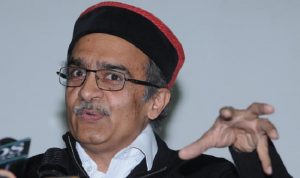 He said that the Modi government’s National Judicial Act to appoint judges in the higher judiciary was a move to bring RSS and BJP affiliates into the judiciary, which would have effected the independence of the justice system.

“The colloquium system of judges appointments, after improvising it further for fair enrollment of competent people was the  best in the world. However, it requires involvement of neutral agencies like Central Vigilance Commission in the existing system,” he said.

He said that during two and half years of BJP government, only 25 judges on the recommendation of the collegium have been appointed and about as 100 posts of judges were laying vacant, shows that the Modi government is trying to influence the existing appointment system.

Land bought for the Komod Education society, said Bhushan, was not being utilized for a tea estate and was exempted from land ceiling act. The society was donated Rs 5 crore by his father, a noted lawyer and a former law minister of the country Shanti Bhuhsan. The society was working for the cause of education and welfare of disabled.

Charging chief minister Virbhadra Singh of indulging in rampant corruption Mr. Bhushan said that an FIR had been lodged against Mr. Singh in a case where he had  filed a PIL against him over Rs 6.15 crors of dis-proportionate assets. Several central agencies were probing the case, said Bhushan.

About the SC order to act against BCCI for not compliance of Lodha Committee Recommendation, he said it was an interesting development as it would root out the rot in the cricket. “It has become a den of corruption which has been propped up by politicians belonging to BJP, Congress and other parties, and who have nothing to do with the game of cricket,” he said.