Unfortunately, in "modern" India the profession has been stigmatised and vilified, though tens of millions of Indian males patronise it on a daily basis.

Would you be outraged or scandalised if someone called you a driver, a chowkidar, an unskilled labourer or a waiter ? Cheesed off or irritated, yes, maybe even amused, but outraged? I don’t think you would be, if you are a person with a sense of history, a social conscience, and a respect for the dignity of labour. Why then would the whole political firmament erupt in anger and violence when some lumpen BJP leader of UP called Ms. Mayawati a “p*********” ? Yes, it was an inappropriate comment, just as Kejriwal’s diagnosis of Mr. Modi as a psychopath was, or the latter’s terming the former a Naxalite was, or Salman Khan’s every second word on women is. But none of those descriptions evoked the kind of mass outrage that the adjective about Ms. Mayawati did. What is so specially derisive about the occupation of the prostitute that it can unite the entire Opposition as even Kashmir and GST cannot ?

In fact, the reaction to the comment is even more offensive and degrading than the original comment, and if anyone has the moral and social right to be gravely offended it is the community of sex workers or the P’s that cannot be pronounced. The perceived “insult” to Ms. Mayawati (the latest rallying point for political parties) implies that prostitutes are a sub-human species, bereft of any moral values, the scum of our society, indulging in an unspeakable occupation, and to call one a prostitute is the ultimate vilification. That the uncouth BJP leader mentioned above actually meant his remark to be an insult only shows that the troglodyte thinking is the same on both sides of the political divide. It speaks volumes about our debased attitude to women, our hypocritical approach to sex, and our dismal ignorance of history. 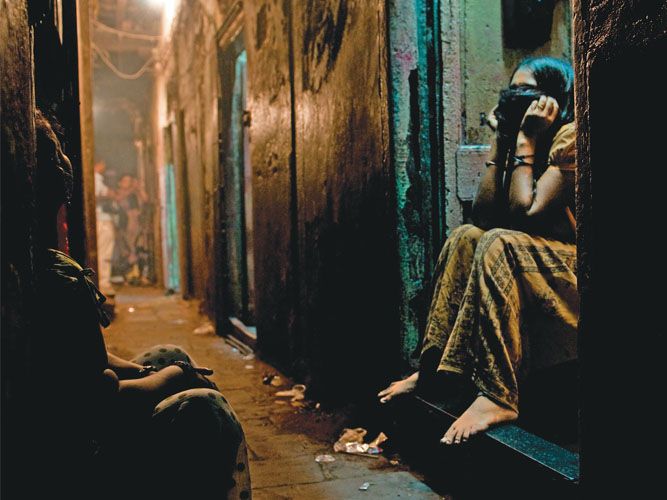 The business of sex, in which most males have indulged in at some point of their hypocritical lives, has been around for thousands of years. It finds mention in the Canterbury Tales and the Bible. In India it has existed as a social institution since ancient times. Chanakya in his “Arthashastra” has defined and codified the concept and practice of the trade of prostitution in some detail. Vatsyana’s “Kamasutra” has whole chapters devoted to its finer arts. It was a well regarded and reputable profession in ancient India as the highly evolved sub-culture of the courtesan and the “tawaif” indicate. In the post Mauryan era only highly educated and accomplished women were allowed to enter the trade. The treatise AIN-I-AKBARI records how, in Akbar’s rule, it was treated and taxed like any other profession: there were separate quarters designated for the courtesans and one Daroga was specifically appointed to regulate the business and to collect taxes from the customers. Nor could any and every one claim the right to be a patron: only persons of a certain social standing were allowed to avail the services of these ladies! The institutions of the concubine and the mistress, so essential for royalty and nobility(!) in times gone by are nothing but personalised off-shoots of this profession. Quite often these latter ladies occupied a more prominent place in the lives of their “masters” than did the genuine and legal wives. It is reported that even Buddha accepted food from courtesans, and we’ve all read about Mary Magdalene who was forgiven by Christ and bore witness to his crucifixion . In other words, most societies in the past had accepted the profession as legitimate and there was no stigma attached to its practitioners.

It continues even today as a traditional vocation in certain communities: in Natpurwa in UP, the Wadias in Gujarat, the Banchara tribe in MP. And there are the “Devdasis” in the temples of the South. Interestingly, Sanchit Garg in an illuminating article available on the net notes that of the 18 types of soil used for bathing the deity during Durga Pooja, one sample is taken from the doorstep of a prostitute, in appreciation of their services to society.

Prostitution is legalised in most of the developed world, including Denmark, Austria, France, Greece and Belgium and 13 other countries, where it is treated like any other profession. They even have state run brothels; those practising the trade are taxed, provided health insurance, receive social welfare pensions; brothels are registered like any other business. There is little hypocrisy and even lesser moral judgements.

Unfortunately, in “modern” India the profession has been stigmatised and vilified, though tens of millions of Indian males patronise it on a daily basis. On paper, prostitution is legal under the Immoral Trafficking Prevention Act 1956, though soliciting and the running of brothels are not. But in practice it is treated as a criminal activity and sex workers are fair game for the police, for whom it is a rich source of income. The Supreme Court in a very progressive judgement seven years ago had asked the government to consider legalising the activity completely but our wholesale duplicity has not allowed this to happen. But it is a thriving business nonetheless even though a rapacious administration and a sanctimonious society have driven it underground. It is estimated that there are three million women in the trade, though this is almost certainly an underestimation. In addition there are thousands of web sites that offer these services, thinly disguised as “Escort Services” (the Goa government recently shut down 237 of them, but they are no doubt back in action under different web addresses). Then there are the ubiquitous “Massage Parlours” who advertise openly in the Sunday supplements of national newspapers: a typical advertisement would go like this: HIGH CLASS BODY MASSAGE BY EDUCATED YOUNG BEAUTIFUL DECENT MODEL LOOK BOLD FEMALE STAFF- RUSSIAN, YUGOSLAVIAN, POLISH ETC. SHOWER MASSAGE ALSO AVAILABLE. FULL AC ROOMS. HOTEL VISIT ALSO. CALL…….. Payment can be made through credit cards, online and perhaps even PAYTM – what other proof is needed to establish that prostitution is a regular business!?

But we will not accept it as such (though our ancestors did) conditioned as we are by our duplicitous moral values, the same set that talks of women’s empowerment but beats up the daughter-in-law for not bringing enough dowry, that makes us pray four times a day and cheat eight times, that extols Dalits but kills them for no reason at all, that venerates the cow as a mother but allows thousands of them to starve on the streets, that makes us touch our parents feet in “respect” just before we grab all their property and throw them out onto the street. And the doyens of this institutionalised phoneyness, of course, are none other than our politicians and legislators. Nothing else comes even close to explaining why Parliament refuses to de-stigmatise prostitution, end the criminalisation of a profession that sustains millions of families, provide some dignity to this vilified section of women. It also explains, as I said at the beginning, the outrage at the use of the P word against another woman. What right does such a corrupted and pharisaical society have to look down on and degrade prostitutes who, at the very least, earn an honest living ? How many of us can claim to do that?