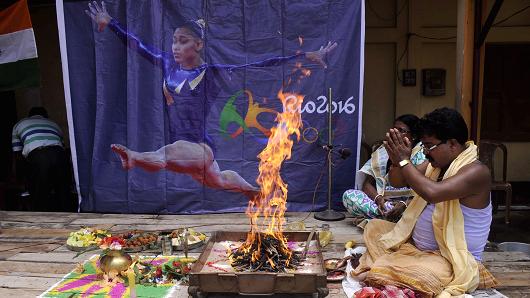 We aspire to become–indeed, have already proclaimed that we ARE — a superpower, what with 1.3 billion people and a (dubious) GDP growth rate of 7.5%. Sadly, as the Olympics have shown, it takes much more to be an influential player on the international stage, to shape world policies, to be taken seriously by other powers,  or to be a role model for other countries. The ability to reproduce in hundreds of millions over decades may have more to do with sperm counts, the Kamasutra and lack of electricity than any genuine greatness of talent or intellect. And a high growth rate may add a few more billions to the net worth of the Ambanis and Adani’s and Mallya’s, but means nothing to the 343 million people living in poverty or the 20 million who join the unemployed every year.
There are other, more significant and relevant, attributes of a great nation and on these indicators we fare even worse than our Olympians. I have done a little research on where India stands on these “softer” factors and would like to share them with the reader, just to retain perspective and not get carried away with the hype:

* As per the 2015 Global Corruption Index (brought out by Transparency International every year) India is at Sr. no. 76 out of 168 countries.

*  In the Ease of Doing Business index we are at no.130 out of 189 countries. By the way, EDB is just corporate gobbelydook for corruption and red tape.

* Reporters Without Borders, an international organisation that tracks freedom of the press across countries, puts India at the 133rd spot out of 180 countries in 2016- below Algeria, Indonesia, Morocco, Cambodia, Chad, Afghanistan which themselves are not exactly models of free speech.

* India is the 7th most dangerous country for journalists, according to the CPJ Committee to Protect Journalists. Since 1992 64 journalists have been killed while tracking stories. We rank below even Afghanistan and Pakistan on this index.

* According to official figures of the National Crimes Record Bureau 300,000 farmers have committed suicide in the last twenty years, and the figure keeps rising every year. The national suicide rate is 11 per 100,000 but for farmers it is 15 per 100,000.

* India has a prison population of approximately 600,000 persons, of whom 70% or 420,000 are undertrials-i.e. people who have not yet been convicted of any crime! Most of them are in prison because they either cannot afford bail, have no legal representation or have just been forgotten by the system. Huge numbers of them have already served more time than what is prescribed for the offences for which they have been accused! Muslims, Dalits and Tribals make up 53% of all prisoners : it doesn’t take a Subramaniam Swamy to figure out in whose favour the system is weighted.

* The country’s much vaunted legal justice system is on the point of collapse, according to the Chief Justice of India himself, no less. There are more than 35 million cases pending in various courts:  given the present strength of judicial officers (roughly 16600) it will take 19 years for these cases to be decided- and this is not counting the fresh institutions every year, Out of 1056 posts of judges in  24 High Courts 478 are vacant; the position in the trial courts is just as horrifying- 4432 out of 20502. There is no sign of things improving soon as the executive and the judiciary are locked in a grim fight to determine who has the broader chest.

*  If any more proof were needed on the rotten state of our criminal justice system, it is provided by the fact that the vast majority of perpetrators of crimes get off scot free. The national conviction rate for IPC (Indian Penal Code) cases( 2014) as compiled by the NCRB is just  45.1%, for cyber crimes it is 0.7%, and for rapes it is 28% ! (the rape conviction rape for Delhi is 17%!). With this abysmal performance how can we ever claim that we are a country subject to the rule of law?

* In 2015 as many as 1.2 million children died before the age of 5, of preventable causes, according to UNICEF’s State Of The World’s Children Report 2016. We are now bracketed with countries such as Congo, Nigeria, Ethiopia and Pakistan. The figures for infant mortality per 1000 live births in our own neighbourhood are: India-48, China-11, Nepal-38 and Bangladesh-36. Yes, sir, we fare worse than even Nepal and Bangladesh, our poor cousins with deplorable GDP rates!

*  In the international Hunger Index India ranks 80 among 104 countries, i.e. the 25th worst country in the world for which figures are available. Our score is 29; the worst is the Central African Republic with a score of 46.9. We rank below even North Korea and Myanmar. And yes, below Bangladesh which has a score of 27.3. The target of the National Security Act 2012 was to cover 813 million persons; even after five years 80 million people are yet to be brought under its ambit.

*  India has the largest number of poverty stricken people in the world- 363 million in 2012( official figures), or 29.5% of the world’s poor. This is more than the population of the USA!

*  Urban India is no better. According to the CIMI( Cities in Motion Index) 2016, our best city ( if we can call it that!) is Mumbai which ranks 167 out of 181 cities in the world! Delhi is 174, Bangalore 176 and Kolkata 179. This is not a one dimensional study but a survey which factored in the economy, human capital, technology, environment, governance, urban planning, transportation, social cohesion and public management. Anyone who has lived in our metros would not be surprised at these findings.

*  What about our legislators and law-makers? The Association for Democratic Reforms ( ADR), a highly respected Indian electoral watchdog and NEW ( National Election Watchdog)  have just released some interesting if not disquieting figures. In the central govt. 24 out of 78 Ministers (31%) have criminal cases pending against them. In the states the figure is 210 out of 609 (34%). Not surprisingly, therefore, the average wealth of state Ministers is Rs.8.59 crore (approx. US$ 1.5 million); as behoves members of a higher body the corresponding figure for union Ministers is Rs.12.94 crores (approx. US $ 2.00 million). And don’t forget, this is only their declared assets!

*  Things are much worse on the social scale. India has the largest number of illiterates in the world. In just rural India 35.73 of the population or 316 million people are illiterate. Of the remaining 64.27% only 3.45% are graduates. The Gross Enrolment Ratio for colleges is a miserable 18%; even this is a misleading figure if one considers the actual standards of teaching in the colleges: a 2010 study by NAAC (National Assessment and Accreditation Council) reports that 90% of the country’s 34000 colleges are just average or below average. The schools are worse: a recent study by Pratham, a leading non-profit working in this sector, found that Class 6 students in govt. schools could neither read nor write at the level of even Class I. Our much vaunted ” demographic dividend” is at best an illusion, at worst it is a ticking time bomb whose fuse has been lit.

*  A country aspiring to be a world leader in the 21st century has to display a mind-set which is progressive, liberal and reformist. Unfortunately, we have consistently failed to demonstrate this. Our polity (and judiciary) still criminalises same sex relationships and persecutes LGBT communities under the monstrous Sec. 377 of the IPC; as recently as in July this year India went against world opinion by refusing to endorse a UN Human Rights Council resolution to investigate violence and discrimination against LGBTs. We have outlawed PAS (Physician Assisted Suicide), imprison those who attempt suicide, refuse to decriminalise defamation, will not allow even victims of rape to abort the foetus produced by such an act, use sedition to curb free speech (in just one year, 2014, 47 cases of sedition were registered and 78 persons arrested), and still permit forms of child labour. Of late various forms of intolerance thinly disguised as either nationalism or as religious protectionism have been threatening to become endemic, with tacit support of the govt. This has not gone unnoticed by the international community which has even begun commenting on it.These are not the attributes or value system of a forward or enlightened nation, one that other nations would look up to.
The enumeration above is not intended to draw up some kind of a “negative” list or prepare a roster on the lines of the Seven Deadly Sins. It is instead meant to show how unprepared we are to assume any kind of leadership role in world affairs because of our inability to rise above traditional behaviour patterns or to embrace new ideas. This is not to say that we have not progressed in the last 70 years- we have, especially in areas such as food production, health care, adoption of technology, the economy, power generation, to name just a few. But we have faltered on two counts: one, we have failed to ensure that this progress reaches the most poor and disadvantaged – it is the elite in the urban (and rural) areas who have collared all the resultant benefits. Two: we have failed to ensure that, concommitant with this lop-sided development, we also progress in the areas of human rights, civil liberties, social cohesion, inclusiveness, and a respect for discipline. We have lost the sense of compassion and of equity. At best we take only half a step when we should be taking two or three.
, and every once in a while we take two steps backward. We have a low threshold of satisfaction and that is what makes us a nation that is comfortable with mediocrity.
Which explains the collective national orgasm over winning one silver and one bronze at the Olympics.

Which should also make Ms. Shobha De reflect again on her trashing of our sportsmen. Emerging from the miasma of mediocrity that their Federations wallow in, it is indeed a wonder that 120 of them even qualified for the Olympics! The medals belong to them, not the country.

Quip of the week:

A friend of my wife made the following astute observation after Sindhu won her badminton silver:
“Its a good thing that the stone pelters of Kashmir did not take training at Gopichand’s Academy in Hyderabad!”