Always remember that 98.50 % of the DNA of monkeys and humans is identical. The difference of 1.50 % explains why the human race is in such a mess.

I am positively appalled at the prospect that monkeys can now be shot in Shimla, consequent upon their being declared vermin by the central Ministry of Environment and Forests. We must not forget that monkeys are the original residents of this city and came here long before the Captain Kennedy’s, Negis and Soods: in fact the last two have taken over the government and business, respectively, in an embrace much tighter than what the poor simians exercise over Jakhoo hill. 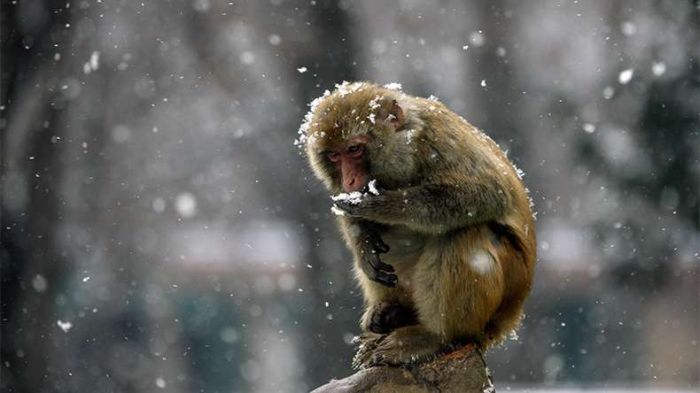 In fact, it is my belief (based on brahmanical intuition, and not on any empirical evidence) that it is on the famous Ridge that a stout alpha male got up on his hind legs one fine morning to have a better look at the alpha female and thereby evolved into “homo erectus” (not to be confused with the then Maharaja of Patiala who did something similar vis-a-vis an English lady and was exiled to Chail). Further evolution took place when the government shifted to Shimla in the summers and when HP became a full state: these produced the “homo prostratus”, most of whom are to be found in the civil services; the “homo corruptus”. who have a natural attraction for politics; and the ” homo OROPus” who wear smart uniforms and play golf the whole day. The point I’m trying to make, dear readers, is that there are many subspecies of the rhesus monkey in Shimla, so why pick only on the ones who have refused to evolve? 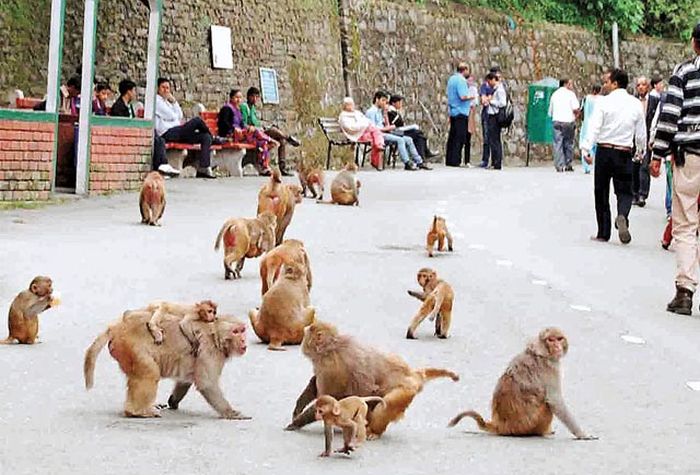 Some years ago the Forest Deptt. decided to adopt an Air-B+B or YOYO Rooms approach to the problem of the apes targeting women’s handbags at Jakhoo ( incidentally, it is only the more evolved and stupid species that target the women themselves and not the handbags): they caught them by the dozen in Shimla and let them loose in the Tara Devi forests, where they were fed fruits, vegetables and the occasional Baljee’s hamburger. It was observed, however, that over a period of time the forest officials developed healthy paunches and jowels; the monkeys themselves usually caught the evening bus from Kaithlighat and returned to their favourite haunts in the town! Very soon this experiment was dropped and the forests of Tara Devi returned to their rightful occupiers- the poachers and the timber smugglers.

Next, the Department started a mass sterilisation programme but, mindful of what had happened during Sanjay Gandhi’s time, it did not sterilise the babies, the pregnant, or even the dead monkeys, and made no distinctions based on caste, religion or economic status. But it soon ran into an unexpected problem: the monkeys quickly started recognising the DFO or the Ranger who came to trap them, something which even the Forest Minister or I, as Secretary, could not do. They even recognised the numbers of their official vehicles! One knowing look, and they would be off, never to be caught. Nevertheless, according to the figures supplied by the Department, by now every single monkey in HP and a few in Hoshiarpur and Pathankot should have been sterilised and their numbers should have gone down significantly. That it hasn’t shows that there’s a foreign hand – or some other appendage – at work here: Pakistan? China? the CBI? the Bandar Suraksha Samiti ? Maneka Gandhi ? It might even be a conspiracy to dislodge the present government a-la Uttarakhand: after all, if the increasing numbers of monkeys were to take over the Secretariat one fine day, would that not amount to breakdown of the constitutional machinery? My personal view is that no one would notice the difference, but then again the courts might take a different view.

Speaking of the Secretariat, the government should realise the stellar role the monkeys play in hiding its incompetence, and worse. It is convenient to ascribe missing files, for example, to the depredation of monkeys and thereby avoid embarrassing RTI queries, something we have been doing for years with panache. In fact, in the early eighties things had gotten so bad (monkeys were even attending cabinet meetings) that the government had to constitute a committee of Secretaries to find a solution to the epidemic. Fortunately, this august body never really took off because it was notified as a COMMITTEE OF MONKEYS instead of a COMMITTEE ON MONKEYS! We never did find out whether the gaffe was caused by a printer’s devil or a Dealing Assistant with a grudge against the IAS. In either case, he was closer to the truth than perhaps even he realised.

Let us not, therefore, run down these magnificent animals to whom we owe so much. Always remember that 98.50 percent of the DNA of monkeys and humans are identical. The difference of 1.50 percent explains why the human race is in such a mess.