Shimla: The Himachal Pradesh High Court today quashed criminal proceeding against Anurag Thakur, president BCCI and three time MP from Hamirpur, that were initiated on the basis of a complaint filed by a junior police official about obstructing the government administration from performing its duties on 24th October, 2013 at Dharamshala Police Station.

Dismissing the whole criminal case Justice Rajiv Sharma noted that “What emerges…… is that Section 195(1)(a) of Cr.P.C. has not been complied with. Section 195 Cr.P.C. is mandatory.

The power to file the complaint could not be delegated to SHO, Police Station Dharamshala. The complaint should have been initiated at the instance of the public servant concerned or his superior officer.

Thus, in view of the matter, the learned Chief Judicial Magistrate Dharamshala had no jurisdiction in the case as there was no complaint in writing before him by the public servant concerned or his superior. The material on record was not sufficient to initially permit the investigation of the case and thereafter to summon the accused and put them to notice of accusation.” 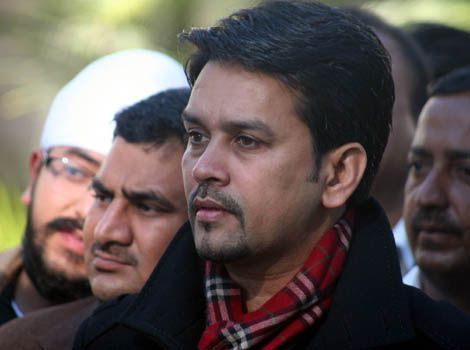 The judge decreed “complaint filed by Station House Officer (SHO), Police Station Dharamshala before chief judicial magistrate Dharamshala, the summoning order dated 10.3.2014 and the notice of accusation dated 7.11.2015 and other consequential orders are quashed and set aside.”

The issue pertains to the matter recorded in the police Daily Diary Report [DDR Nos 12(A) & 15(A)] which states that Inspector Jagdish Chand and other staff members were in Police Station (State Vigilance & Anti-Corruption Bureau), Dharamshala when Anurag Thakur initially entered the police station and thereafter went to the office of Superintendent Police (SV & ACB).

The criminal complaint against Anurag Thakur was that at about 1.55 p.m. on 24.10.2013, he alongwith 200-250 persons entered inside the main gate of Dharamshala SV & ACB Police Station, raised slogans and burst crackers.

Inspector Jagdish Chand with Inspector Prem Chand who were at the police stated apprised Anurag Thakur and others that SP Yog Raj, who was out of station, was carrying out investigations.

After that Anurag Thakur and about 25-30 persons forcibly entered the SPs Office, raised slogans against the chief minister in the courtyard, came out at about 2.30 p.m. and remained near the gate for about 10 minutes.

In the whole process Thakur and his men disrupted the government administration for about half an hour, and had committed an offence under Section 186 of IPC.

Justice Rajiv Sharma in his order observes “It is not stated what duties were being discharged by those police officers/officials present in the Police Station and which one of them was obstructed voluntarily from discharging official functions.”

“In order to attract the provisions of Section 186 IPC, it has to be seen whether the public servant in the discharge of his public functions has been voluntarily obstructed or not. It is reiterated that what (is) mentioned in the complaint is that the government administration was disrupted for half an hour. Merely the disruption of government administration without mentioning that the public servants were obstructed voluntarily from discharge of their public functions would not attract Section 186 IPC,” the judge noted.

The Judge also observes that, “the complaint has neither been lodged by Inspector Jagdish Chand nor by some public servant to whom he was administratively subordinate of other police officers/official present in the Police Station (SV & ACB), included SP.

“The complaint has been filed under the signatures of SHO, Police Station Dharamshala. The SP SV & ACB could not delegate the power to SHO to file the complaint under section 186 IPC,” the judge ruled.