For a country addicted to the theater of the absurd, we appear to have plumbed new depths of absurdity with the current cacophony about shifting IPL matches out of Mumbai. It would appear that the country has never been so divided on any issue since the Partition, with even the courts forsaking their tens of thousands of pending cases to examine whether the stadiums should use potable water or treated sewage water, whether the latter can be sent to Latur and whether BCCI is our primary national enemy or Pakistan. BCCI is more concerned about its depleting revenues than the depleting water table. And Mr. Fadnavis, of course, is more occupied with ensuring dance bars remain shut than saving his farmers who, at last count, were being depleted by five heads PER DAY. And the media, which ignored the developing catastrophe for months, has now arrived on the scene with the panache of vultures (who, it must be stated in all fairness, usually arrive after the object is dead).

All this is perfectly understandable in the context of our corrupted polity, unaccountable bureaucracy, debased national conscience and an acquisitive society that has completely lost all compassion. It is much easier to quick-fix a villain (Mallya, Lalit Modi. Kanhaiya Kumar, BCCI) than to admit to our own systemic failings and to deal with them. Even the courts appear to have walked into this trap set for them by the powerful forces who manipulate the national agenda, And so they have lavished all their wisdom on questioning the propriety of BCCI utilising 7 million litres of sewage water on stadium pitches when lakhs of farmers/hectares in Vidharba and Marathwada thirst for every drop. This is precisely what the government (central and state) wanted the courts to ask. For the real questions – the ones that need to be asked – will take some answering: Why is sugarcane (a highly water-intensive crop) being grown in a region that is traditionally deficient in water? Why are the sub soil water reservoirs being depleted of 183 trillion liters of water every year for this crop, a quantity which just cannot be recouped by nature? Why is it that inspite of having spent Rupees 30,000 crores over the last ten years on irrigation the state has managed to add less than 1% to the command area? 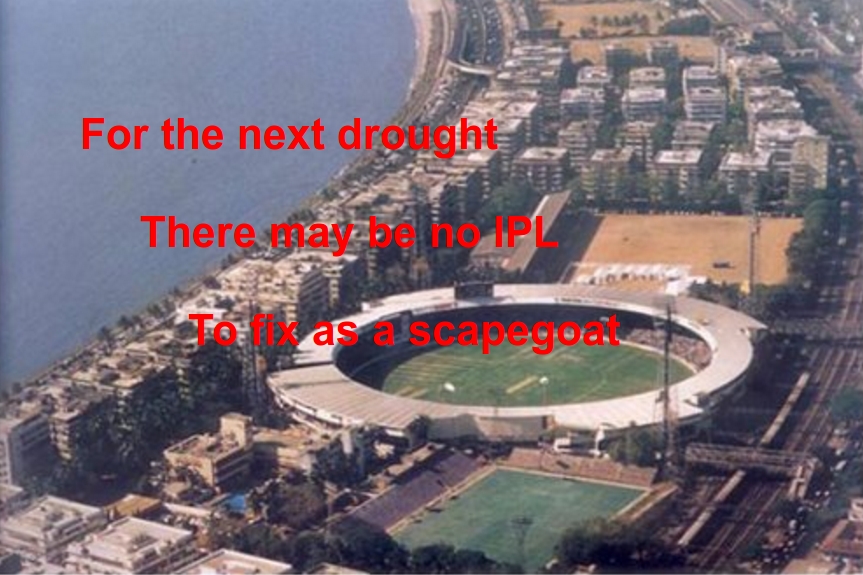 These questions will never be asked. The national conscience has been assuaged by the shifting of 16 matches out of Maharashtra, blood money of Rupees 5 crores extracted out of BCCI and the dying farmers requested to defer their suicides because the Met department has predicted a surplus monsoon. The momentous decision of the Mumbai High Court will lead to the saving of enough water as is needed to produce 2.8 tonnes of sugarcane. Q.E.D. We can now move on, with a clear conscience, to the celebration of the things that actually make India great – Ambedkar Jayanti (an additional, much deserved holiday for overworked government employees), e-NAM (a digital trading portal for those farmers who have not yet killed themselves), Gram Uday se Bharat Uday (a movement for social harmony post Messers Giriraj and Shakshi Maharaj), the renaming of Gurgaon to Gurugram (presumably Murthal shall now be renamed Molest-sthal), and so on.

But the misfortune of this country is that there still exist old world die-hards like me who would request Mr. Javadekar and his ministerial colleagues to reassess their approach to the environment and not to regard it merely as an obstruction to the ease of doing business. In just the last four years Mother Nature has sent us four significant warnings: the Uttarakhand disaster, Srinagar floods, Chennai floods, and the 2500 heatwave deaths in 2015. The latest is this drought which will get much worse in the coming days. The Cauvery has completely dried up in stretches; the level of the Ganges has fallen to such an extent that last month (in March, when the summer had not even set in !) the 2100 MW power station at Farakka had to be shut down, triggering a blackout in large parts of eastern India; the availability of water in the 92 nationally monitored reservoirs is only 39.45 billion cubic meters against their capacity of 157.80 bcu; the winter snowfall in Jammu & Kashmir, Himachal Pradesh and Uttarakhand has been almost 50% below average.

These are reasons enough, Mr. Javadekar, for you to reconsider the manner in which you are diluting the Forests Rights Act and proposing to amend and weaken the three pillars of our environmental regulatory edifice – the Indian Forest Act, the Wildlife Act and the Forest Conservation Act. Mr. Minister, you need to spend sleepless nights over the fact that your own SFR report states that between 1999 and 2013 the country has lost 10.60 million hectares of original forests. The government should revisit its decision to notify only 27% of the Western Ghats as Eco-Sensitive Zone instead of the 37% recommended by the Kasturirangan Committee: this alone will protect an additional 13,000 sq. kms of the ghats on which all the rivers of the southern peninsula are dependent. Stop whittling away our precious Protected Area network for industries, projects and highways. Give up the China inspired folly of damming our mountain rivers out of existence. Don’t rush into interlinking of rivers without carrying out honest EIAs.

Ministry of Environment & Forestry should take the initiative in persuading the Agriculture Ministry to develop a Crop policy for the country that is based on climate and hydrology, not avarice and the peddling of influence: there should be no place for sugarcane in Maharashtra or paddy in Punjab, both of which are water stressed states. Steps should be taken to reverse the depletion of underground aquifers; the adverse impact of indiscriminate free power for agriculture should be assessed: this is a primary reason for overexploitation of underground water. Equally important is to develop a national Drought Code which can conserve and prioritize scarce water resources in times of droughts. There is much to be done beyond the court hearings and prime time discussions, and much more at stake than mere TRPs.