Dharamshala: Sports and that too a cricket match is being turned into a battleground for settling domestic political scores as well as to test the thaw in India Pakistan relations over holding of a World Cup T20 match at the scenic Dharamshala ground, which is  slated for 19th March.

Just a fortnight before the match is to be played in the Himalayan ground, chief minister Virbhadra Singh has said that the India  Pakistan match should not be held in Dharamshala.

Singh in a press release said, “Keeping in mind Pakistan attitude towards India and the recent terror attacks in Jammu and Kashmir where soldiers from Himachal Pradesh have also sacrificed their lives, the cricket match with Pakistan should not take place at least in Dharamshala.”

Virbhadra Singh also disclosed,“We have written to the Union home minister on behalf of the government regarding this matter. I think if the match takes place in Dharamshala, it would be against the will of the people of Himachal Pradesh.” 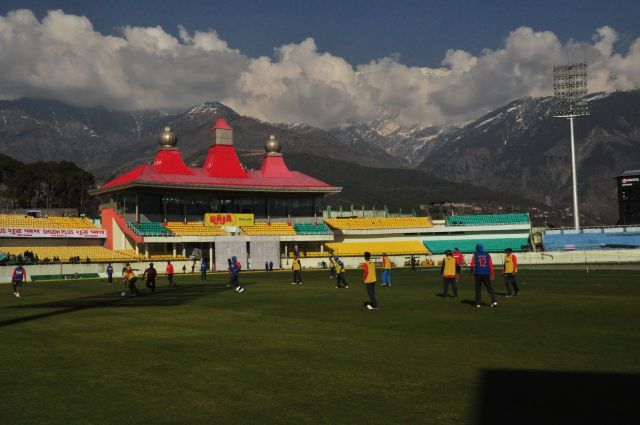 The state government has already declined to provide security for this  particular  match.

Pakistan Cricket Board (PCB) chairperson Shaharyar Khan has responded, “We have got permission from our government to go into the World Cup T20. Now, the security is India’s responsibility. I am sure the public there will want us to play matches.”

Board of Cricket for Control in India (BCCI) secretary Anurag Thakur today (1.3.2016) has fully backed Dharamshala as the venue for hosting of the India-Pakistan match.

Reacting sharply to Singh’s statement, Thakur, who is also a BJP MP in Lok Sabha said “The venues of the World Cup matches were decided one year ago, the allotment of matches was decided six months ago. People all over have made bookings and it is not fair to give such statements at the last minute.”

“The Congress led state government is clearly playing politics. Hundreds of Pakistani athletes were given security during the South Asian Games in Assam, why can’t the Himachal government do the same?”

“By claiming that you cannot provide security, you are only giving credence to Pakistani claims that there is a security threat to their team in India. It’s about the country’s image, you cannot play politics over it,” says Thakur.

On the other hand Congress party which is on the treasury seats in Himachal (Dharamsala is the headquarter of politically important Kangra district), claims that since Kangra  is home to a large number of soldiers, which include Kargil War heroes Captain Vikram Batra and Captain Saurabh Kalia, hosting the Pakistani team would hurt sentiments of the martyrs’ families.

Himachal Pradesh Congress Committee has also criticised Anurag Thakur over the decision to hold the match at Dharamsala.

“BCCI should either cancel or shift the match to another state to honour the sentiments of families of martyrs,” says HPCC president Thakur Sukhvinder Singh Sukhu.”

Meanwhile, the HP ex-servicemen league is also openly opposing the match and its president Vijay Singh Mankotia shot off a letter to Prime Minister Narendra Modi asking him to prevail upon BCCI.

Mankotia in his letter to the prime minister said that since the people are mourning the deaths of their brave soldiers, they would ‘relish’ the slogans of ‘Pakistan Zindabad’ by Pakistani supporters during the match in Himachal.

“Where Indo-Pak talks can be cancelled and postponed after the terror attack at Pathankot, why not a cricket match,” says Mankotia, adding that over 1 lakh ex-servicemen would launch an agitation to prevent the Pakistani team from entering Dharamsala.

Mankotia said that close on the heels of the Pathankot attack, two more Himachali jawans were killed during an encounter in Pulwama.

Known for taking a stand on party affairs and other important issues Shanta Kumar, last Saturday dashed off a strongly worded letter to Prime Minister Narendra Modi suggesting that the match should not be allowed at Dharamshala.

He feared that holding the match at Dharamshala close on the heels of martyrdom of two gallant soldiers – Sanjeevan Rana and Jagdish Chand –who laid down their lives fighting Pakistan militants at Pathankot airbase attack, can create a serious law and order situation, apart from hurting the sentiments of the families living barely few meters away from the stadium.

“In Kangra, practically every family has one person serving in the Indian army, or ex-servicemen. Recently, we lost two soliders fighting Pakistani militants at Pathankot.

The scheduled India Pakistan has become a subject of controversy after Indian politicians making their intentions clear that they would not allow the match to be held in the hill station.