Manali: Opposed to the National Green Tribunal (NGT) orders about limiting the per day number of vehicles permitted to goto Rohtang Pass at 1,000, taxi operators in and around Manali struck work today and gone on an indefinite strike.

“No taxi will offer its service to any tourists from Tuesday,” said Puran Chand, president of Him-Aanchal Taxi Operators Union. He added, “Service will be also discontinued on all local and long routes. Strike will continue until all taxis are allowed to go towards Rohtang. We are forced to take this step as it is about our livelihood.”

All  taxis of Manali, including tempo travellers, have supported the strike call. Many tourists staying in Manali, who are dependent upon taxi services for outdoor sightseeing, would be impacted at a time when the summer tourist season has just picked up in this resort township.

Speaking to Hill Post, Puran Chand said “taxis were not allowed to go towards Rohtang beyond Kothi today and thousands of tourists who had already left for Rohtang were harassed. “Rohtang is the major tourist destination of Manali. If we are not allowed to go to Rohtang, we cannot earn our livelihood. We shall fight for our rights,” he said. 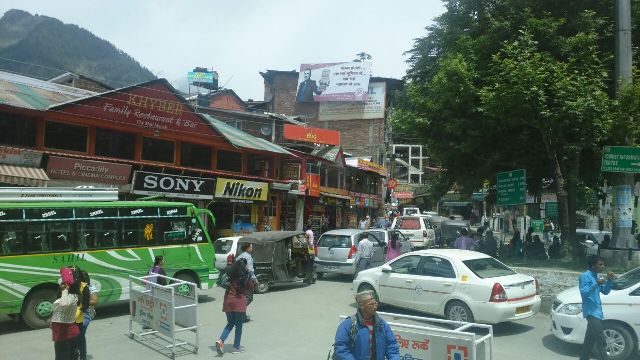 After the taxis were not allowed to go towards Rohtang, taxi operators and tourists scuffled with police. Later local men and women from nearby villages jammed the road. Kullu deputy commissioner Rakesh Kanwar had a hard time in trying to convince the residents that justice would be done by the courts and local rights would be protected.

Julli, a tourist from Mumbai said they had spent thousands of rupees for their tour only to see the snow at Rohtang and now they were being stopped without proper notification. “We shall never come back to Manali. Tourists visit this place mainly to see snow and stopping tourists mid-way with out prior information is gross injustice,” she said.

Kullu deputy commissioner Rakesh Kanwar speaking with Hillpost said the administration will comply with the orders of the NGT and only 1,000 vehicles a day would be allowed to move to Rohtang.

“We today visited Rohtang pass to check all preparations. Rohtang top would be opened for tourists after two weeks. Till then tourists can see snow at Marhi and Beas Nullah,” said Kanwar.