Spanning a 20 year period, accounts of a dozen treks up and down into some of the remotest and most difficult parts of Himachal Pradesh discovering and documenting the transition and changes that global warming, demands of development and impacts that a growing population is having on ecologically sensitive regions does set Trails Less Travelled apart from other travel books on the region. 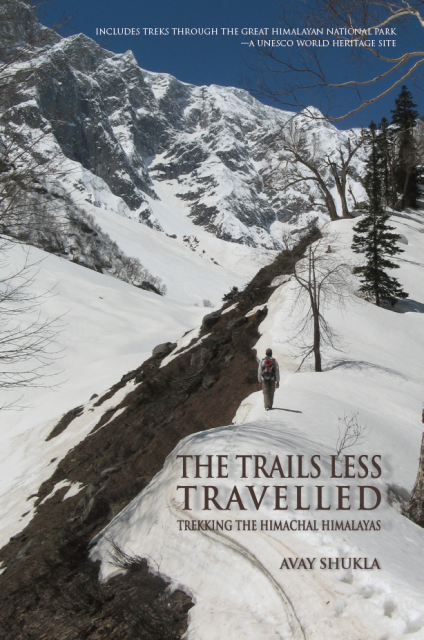 Large portions of the Himalayas in these parts being inhabitable because of the sheer scale of altitude and tough terrain gives Avay Shukla, an avid trekker, ample space to wander, explore and gather experiences that stay fresh for a lifetime.

The travel tales delicately penned are not just about the land, its people in relation to the rare flora and fauna inhabited but are also sprinkled with  observations and  humour of a sharp administrator’s mindset, honestly recording the effects of heavily loaded government policies having gone haywire on the ground in many parts.

Unlike the religious Char Dham yatra’, four treks in the wilderness of Kullu’s Great Himalayan National Park, now a World Heritage site now, along the Tirthan, Sainj, Jivanal and Prabati streams to their glacial sources are about discovering how nature is reclaiming this enclosed mountain territory after conservationists have managed to restrict human intrusion.

In sharp contrast are other tales of pristine lakes and isolated peaks being laid waste by mass pilgrimage tourism!

Muddied waters lower down in the valley giving way to crystal clear waters as a trek gets going upstream illustrate the impact constructions and hydropower projects  are having that conservationists like the author himself are finding hard to battle.

Increased silt flows as an Himalayan glacier retreats slowly filling up the small and beautiful Nain Sarovar lake on the trail to 5227 meter altitude Sirkhand Mahadev is up against another threat. Pilgrims on their way to the holy peak take a dip here before moving on but the author account of a peculiar practice the ritual has come to leave behind shows the ridiculous insensitivity creeping in.

“The bathers leave their underwear behind in the lake! We are told that the lake bed is now littered with these undergarments, polluting its pristine beauty.”

This fragile lake at Parvati Ka Bagicha meadow where thousands of rare Brahma Kamal flowers bloom had 25,000 visitors, mostly pilgrims, camp over in 2003. The numbers are only growing.

Silt has already swamped Chamba’s beautiful Khajjiar Lake and the district administration has to spend a lot of money to rid the holy Manimahesh Lake of discarded underwear’s and other human waste each year before the start of the annual pilgrimage.

Warmth of a people living in a harsh land finds expression on the Raldang Kora trek, a difficult grade Parikrama trail of mighty Kinner Kailash massif in Kinnaur, close to the Indo-Tibet border. An insistent invite for the trekking party at the small hamlet of Lambar, consisting of only four houses but divided into two camps, had to be settled with ‘wine at one house and dine at the other.’

Impact of governments’ expansionist education policy surprised the seasoned trekker, who retired as a top bureaucrat of the state, at stumbling upon a primary school on the Dhela Thatch trek in Kullu functioning from 25 feet deep and 10 feet wide cave. That the area was part of the then education ministers’ constituency did not find a need for having a school building. It lay completely forgotten for 3 years till it was brought to the notice of the minister, who did not believe that such a school in 21st century did exist in his backyard.

On the cannabis circuit trail from Chandrakhani Pass to Malana, the traveler observes why the enforcement agencies simply cannot contain the illegal drug trade in Malana Cream, which has the dubious reputation of being the best hashish in the world.

Raids conducted since 2002 for uprooting the contraband crop around Malana village has only pushed the cultivation into areas that are more difficult for the police to locate or access because of their poor level of physical fitness.

Be it the potency of angoori wine, (locally called ghanti), that Shukla finds to be the biggest hazard an unwary trekker could be faced with in Kinnaur, or surviving a fall into a glacier crevasse while crossing the Pin Parbat Pass, or the delicate religious myths and tales associated with peaks, lakes, streams, habitats, or surprising a bear in a dense forest or sighting a large flock of extremely shy blue sheep negotiating stiff cliffs with ease, The Trails Less Travelled keeps you engaged on each narrative. Pleasing pictures accompanied by trekking route sketch maps enrich the experience.

Shedding bureaucratic indulgences, the trails peg in detail the life of communities, their unique customs, challenges of development in fragile environments, politics of conservation and the transformation that is overtaking these places.

Best summed up by back page blurb, ‘The Trails Less Travelled is, in essence, both a celebration of wild nature and documentation of valuable legacy that may not survive then next 20 years.’

Fiercely independent and an unapologetic conservationist, Avay Shukla served as an Indian Administrative Officer in Himachal Pradesh for 30 years. His role as a government servant often clashed with his concerns for the environment that finds voice in this book. A relentless blogger, Shukla’s first book – The Trails Less Travelled, published by Niyogi Books, has just hit the stands.