Dehra Dun : There is much talk about ‘Swach Bharat’, with the campaign being spearheaded by none other than Prime Minister Narendra Modi himself. But apparently with a Congress government in Uttarakhand, no heed was paid to it in the state capital by the concerned authorities during the Baisakhi mela at Chandrabani about 15 kms from here.

Apparently with a number of temporary shops coming up for the mela, the authorities should have made some arrangements for the shopkeepers who come from far and near and live in their shops itself to defecate, but neither the state government, nor the concerned authorities have been moved by the “Swach Bharat’ campaign, so it looks. 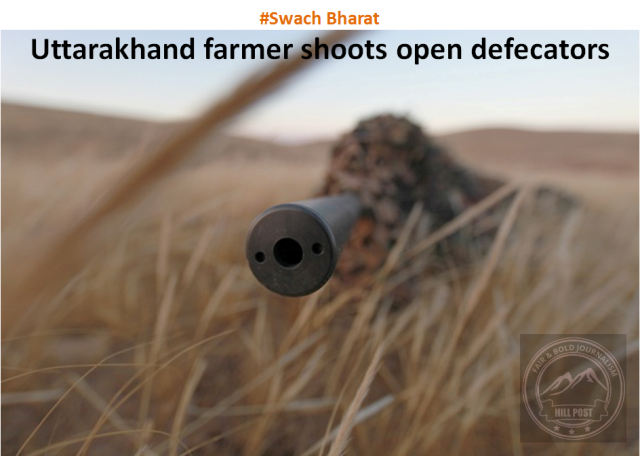 And the shopkeepers having no place to go, decided to use the nearby fields as a place where they could ease themselves, hoping that the field owners would look the other way. But, this farmer did not take it kindly to the shopkeepers squatting in his fields to defecate and decided enough was enough. He took out his air gun and fired at six of them, hitting them with pellets.

The six shop keepers who were injured by the pellets, fled from the field and were later taken to the Doon Hospital for necessary first aid. The police rushed to the scene to prevent any flare up between the villagers and the shop keepers, but apparently better sense prevailed, and neither did the farmer nor did the injured shop keepers lodge a report in the matter.

But what is appalling is the fact that the mela is organized every year for the last 50 years, if not more and shopkeepers come from outside to sell their ware and the concerned authorities, despite knowing well the fact that small businessmen come from outside and stay in their stalls, made no provision for making even a temporary toilet for them.