Kullu: Demanding marketing space for street vendors, Central Industrial Trade Union (CITU) for the past three days has been holding protests against the Kullu municipal council inability to do so before the district headquarters here. 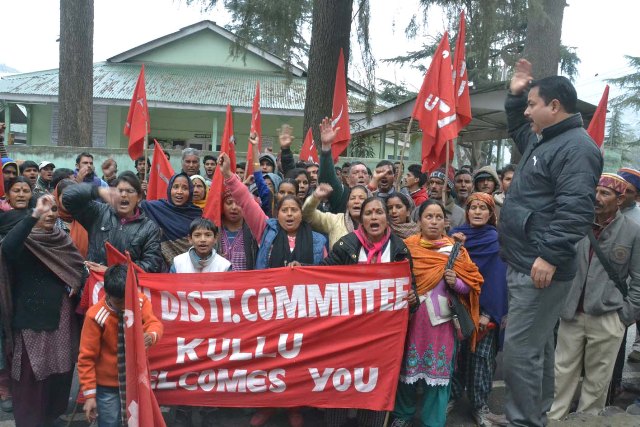 The vendors have been agitating about the space provided for them as it is at a corner which does not attract many footfalls.

One of the agitating vendors told Hill Post, “ earlier we used to run our stalls along the  main road at Dhalpur.  From business point of view that place was very good but the newly provided place is not as good as old one was.

The municipal councils decision has hit us badly and left us tense as how to earn for our livelihood, said one of the displaced vendor.

Rajesh Thakur, CITU general secretary of  district committee said, the district administration and the municipal council were neglecting the towns vendors. “This was in violation of the Vendor Act 2013 and such exploitation would not be tolerated,” he said.

Raghuveer Singh, executive office Kullu MC says that the two month decision to shift street vendors had been taken on orders from the High Court.

Speaking to Hill Post Raghuveer Singh said, “About two months ago all street vendors were moved from main roadsides as they occupying prime public spaces here and there that was marring  the towns beauty, but at the same time these vendors were given alternate sites to carry out their business and earn a livelihood.

They don’t seem satisfied with the new venues, but it’s not possible to provide them the old place,” he said.

Meanwhile sources disclosed that alternate sites located behind the Lal Chand Prarthi Klakendra, near Zonal Hospital – Kullu, and those near the cattle ground at Dhalpur and Sarvari were being looked into.