Kullu: Unusual spring snows and torrential rains have caused immense losses to crops and property across the hilly regions of the state, with the district authorities here putting the loss in Kullu valley alone at over Rs 30 crore.

At many places the power lines are disrupted, landslides have blocked many roads, especially the connecting rural roads and much of the stone fruit crops of almonds, plums and apricots have been affected.

District magistrate Rakesh Kanwar let Hill Post know that the administration was doing its best to cope up with the inclement weather to handle the situation.

“Bad weather has caused damages worth more than Rs 30 crore in the district, which could rise after we assess the overall losses,” said Kanwar.

With the weather continuing to play havoc with power lines, roads and farms, people living close to landslide prone regions are a scared lot. 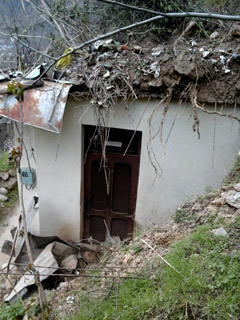 Houses at many places also have been damaged, rendering some families to shift to safer locations.

Landslides at Muth Hill, which is the backdrop of Akhara Bazaar in Kullu Township, for the past three days, have been threatening the marketplace. Three houses in the locality have already suffered extensive damage and families have had to vacate their homes.

Families in other houses residing close to the landslide zone are living at the edge as a sudden breakout remains a constant threat.

Though the administration is claiming to be doing its best, the residents are holding it responsible for neglect of the area.

“If there was a proper drainage system in place at prone areas like Muth, such landslides would not have occurred in the first place,” said one resident.