Its been a little over two weeks since the controversy over the BBC documentary INDIA’S DAUGHTER broke out, and now that just about everybody has seen it inspite of the government’s ban, a little stock taking would be in order. Why exactly did the government ban the documentary, when anyone who has seen it would tell you that it glorifies, not the rapists( as the govt. stridently claimed), but the aspirations and fortitude of a girl from a humble background, the sheer grit and courage of her parents, and the awakening and outrage of a young civil society that had had enough? The answer, to me, is simple enough. What the documentary exposes is the mindset of a misogynistic, patriarchal society, the inefficiency of a callous criminal-justice system, and the brutality of a police force whose insensitivity is only matched by an unlimited capacity for inflicting violence on young boys and girls. It is THIS aspect of the documentary that had petrified a government in perpetual denial; all the rest are red herrings and white lies. 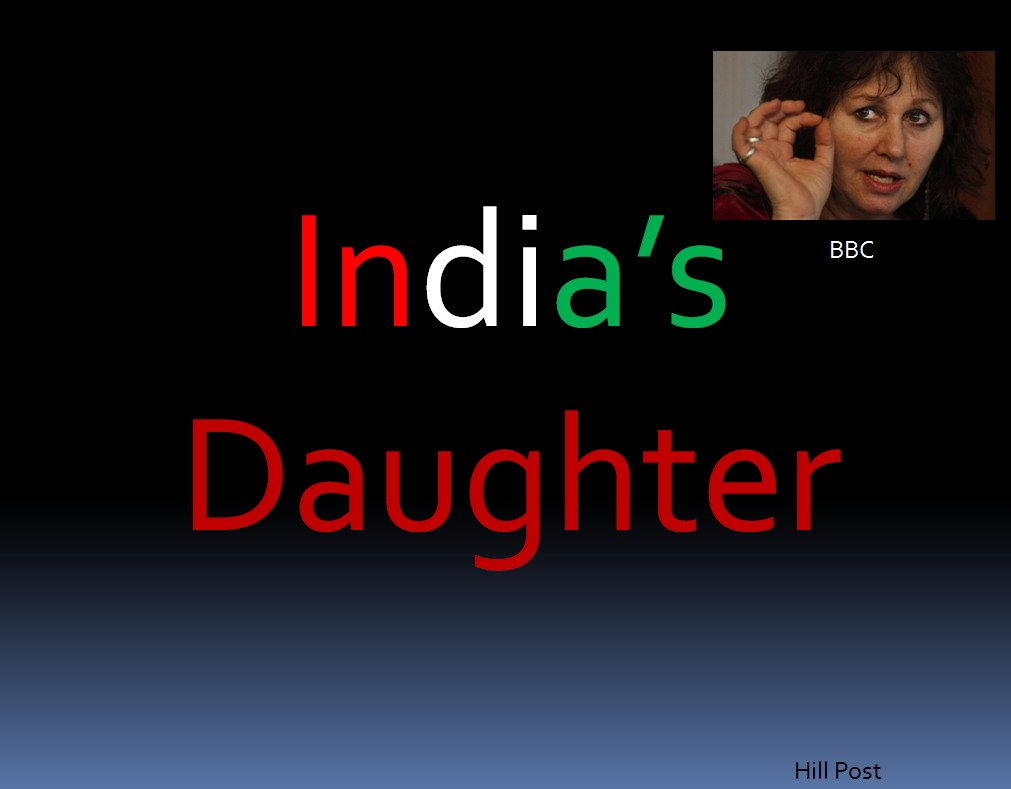 What I find particularly anemic and farcical is the subterfuge that the film is part of a western conspiracy to defame India by always portraying it ( unfairly) as a land of violence and poverty. Two published pieces exemplify this kind of nonsense. The first is an article by Professor Jakob D Roover of the Ghent University, Belgium, published on 11.3.2015 on the NITI CENTRAL site. This gentleman is probably a sociologist or historian but in this article he is more of a mathematician, for his entire effort is devoted to statistically proving that the incidence of rape in India is far lower than in many developed countries. And so he informs us that while in India there are 1.8 rapes per hundred thousand population, the comparative figure is 30 for Belgium, 28 for the UK and 27.8 for the USA. A similar line of argument is adopted by Mr. Jawahar Sirkar in a recent article in the Hindustan Times, where he regurgitates the same figures and, going off at a tangent, roundly berates the BBC for having a budget much larger than Prasar Bharti. He also draws on his experience as Culture Secretary to castigate western tourists and wives of visiting Heads of States for their poverty-centric focus in India. It may not be entirely coincidental that Mr. Sirkar is the CEO of Prasar Bharti and NITI CENTRAL is a barely disguised mouth piece of the right wing.

Both these gentlemen could not be more wrong. The malady in India is not rape per se but the attitude of an increasingly callous and insensitive society to those who are most vulnerable. The major share of the blame for this has to go to those who control and dominate the power structures of Indian society-political leaders, the judiciary, the police, influential religious leaders, khap panchayats. Each of them in their own way and in their own sphere of influence have continued to demonstrate a lack of respect or empathy for women. And it is precisely THIS which differentiates us from truly civilized nations. This is not a numbers game as our two writers seem to think, and try to prove by trotting out their per capita estimates of rape. The disease in India is about the ATTITUDE of those who influence behaviour in society, who administer the country and who can make a difference. In none of the other countries mentioned in the articles above can Ministers and MPs make the kind of derogatory statements about women that their Indian counterparts do regularly, without being forced to resign immediately from their posts; in none of them do four out of five rape cases end in acquittal; in none of them are rape victims humiliated in courts and ostracized by society( and even family) as in our sick nation. It is these comparisons that Msrs. Roover and Sirkar should have dwelt upon, for these are the contextual circumstances that shape society’s attitude to women, and unless we admit this things will not improve.

To prove this thesis I need do no more than draw the reader’s attention to just four news reports in the last two weeks, during the same period that Sirkar and Roover and kindred apologists for the government were busy running down the BBC documentary.

The first is a report of the National Crime Records Bureau which reveals that in 2012, out of 25000 rape cases tried in courts 18000 ended in acquittal. An incompetent, corrupt and misogynistic police and a couldn’t-care-less prosecution ensures that there is no fear of the law, and by the time the legal process draws to a close the victim lies crushed and the perpetrator goes free. How is that for a statistic, Mr. Roover?

The second report is even more horrific: The 2nd. March issue of the weekly magazine OPEN reports that Mahendragarh district of Haryana has the lowest child sex ratio in the state-775 girls for every 1000 boys. There is more: Jorasi village of Narnaul district has a ratio of -can you believe it?- 286 girls for 1000 boys! And Jorasi is not the boondocks-it is part of the National Capital Region, has a prosperous population of 2000, and a literacy rate of 80%! Incidentally, it is the notoriously regressive and violent Khap Panchayats who rule the roost here, and every Chief Minister has tacitly, if not openly, supported them, for a vote is more important than the missing girl of Mahendragarh.

Third. In a judgement any sane man will find difficult to believe, the Delhi High Court ruled that the victim of the Uber rape case has to depose in court a second time-in effect go through the ordeal of examination , cross examination and humiliation a second time at the hands of lawyers of the type we have all seen in the BBC video. She had already answered more than 142 questions put to her by the defense over many agonising and painful days, now she has to go through this all again. Why? Because the accused claimed that his first lawyer was incompetent and he now had a second lawyer! This plea had been rightly dismissed by the trial court but the High court, no less, saw merit in this garbage: if incompetence of lawyers were reason enough for a retrial then 95% of the cases in India would have to be retried. But the Honourable Court bared its mind set even further when it explained that the delay caused by its order would adversely effect the accused, not the victim!( Fortunately, the order has been stayed by the Supreme Court. But this is not good enough, because this simply prolongs the victim’s trauma: the Delhi High Court order should have been struck down immediately). This then is the sensitivity and empathy which our judicial system has for women who have been gravely wronged. Incidentally, whatever happened to the complaint of sexual molestation made last year against two retired judges of the Supreme Court ?

The fourth piece of news will sicken you, if you have not thrown up already. Mr. Sharad Yadav , President of the JD(U) who has forgotten when he last won an election but still continues to haunt Parliament, was at his brazen worst when he made atrociously sexist remarks about the complexion, figure and dancing skills of southern women, in the Rajya Sabha. And here is the nadir- no male Member objected, primarily because most of them were too busy sniggering and giggling at the scatological humour on display.

This then is the context in which INDIA’S DAUGHTER should be considered ; Do not let a girl child be born, but if she does arrive, make sure that she wished she was never born. It is not a film about rape but about an innate contagion in a nation which is unwilling to accept that it is sick and therefore refuses to look at the X-ray that this documentary is. How then can the healing start?