Shimla: As part of ‘National Awareness Campaign on Energy Conservation’ public sector power generating company SJVN Ltd recently concluded a state level painting competition for schools here in which over 4.61 lakh students participated. It is being counted as the largest ever painting competition conducted by any organisation in Himachal schools.

The competition is held every year to encourage painting talent in children across Himachal Pradesh.

This year, the competition was open for two categories; one was for students of class 4 to class 6 and the other was from class 7 to class 9.

Speaking on the occasion Nand Lal Sharma,  director SJVN disclosed “in comparison to 2005 when the competition was started and only 2743 students from 52 schools participated, this year as many as 4,61,132 students from 14,238 schools from all over Himachal Pradesh took part in the competition”.

He also added that as part of Swatchh Vidhalaya Abhiyan program SJVN would be constructing 2100 toilets in Himachal Pradesh.

Governor Urmila Singh at Raj Bhawan presided over the concluding function where the budding young artists were awarded. She handed the winners a cash prize of Rs 20,000 for first position, 15000 for second and 10,000 for third position. Besides the winners there were 10 consolation prizes of 2500 each awarded for each category. 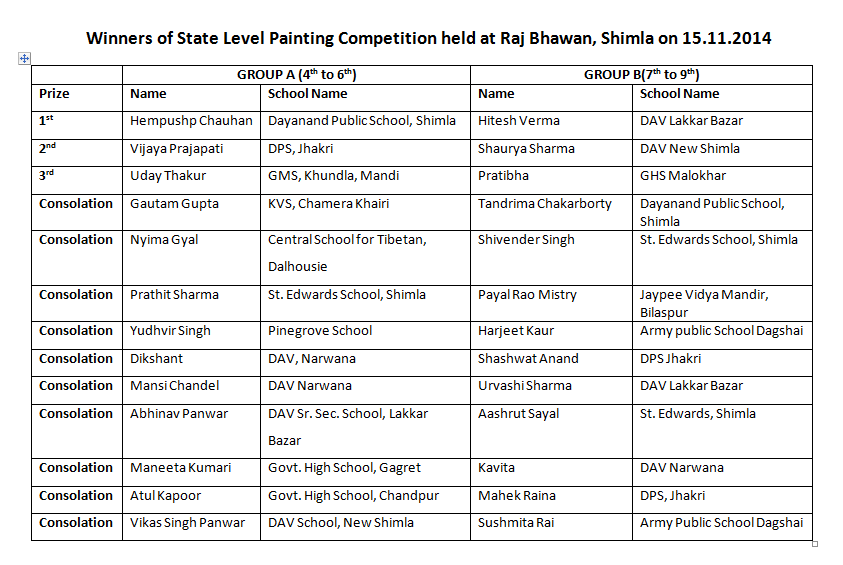 A passionate traveler, a budding photographer, writing is something that may not define me but I do love it.