A political party must be endearing. It should have the aptitude to grasp the prevailing mood of the populace and frame its strategy accordingly. The capability of a party to constantly amend its approach according to the issues of the day allows it to stay relevant in the political scenario. The grand old party of Indian politics that is the Congress has over the past couple of years failed to gauge the public mood. They have misunderstood the expectations of the country and accordingly their electoral tactics are failing them in one election after another.

After the humiliating defeat in the May 2014 general elections it was expected that the party would try to reinvent itself by grasping the socio-political change occurring throughout the country. However the recent opinion polls for the states of Maharashtra and Haryana show that the Congress party is going to get a heavy drubbing at the hands of the BJP. The traditionalists and sycophants within the organization will most likely hide under the garb of anti incumbency to explain the poor performance in both the states. But the problem no longer is anti incumbency, it is the party’s inability to strike a chord with the sentiments of the public that is letting it down and there are several issues it needs to immediately address. 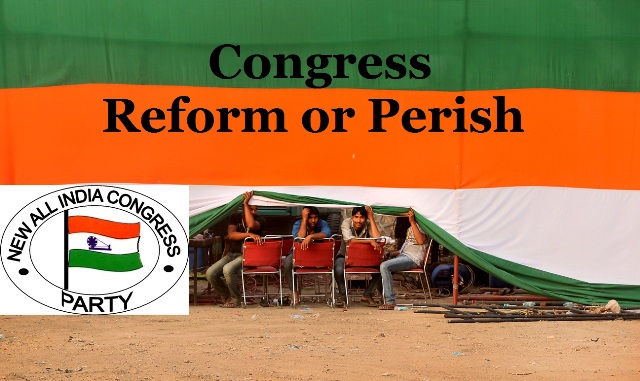 It is imperative that the party apologize to the public for the dismal governance they provided under UPA 2. One does not expect the Congress party to ask for forgiveness openly, but a slight posturing in their political stand which tilts towards acknowledging their failures will go down well with the people in the long run. Indian electorate has a short memory and a dubious tendency to forgive even the most miserable governments. Indira Gandhi was re elected to power after the emergency fiasco because she humbly accepted her wrongdoings. The same is true for Jayalalitha who in spite of running one of the most corrupt governments in Tamil Nadu from 1991-1995 was voted back to power in 2000.

The over dependence on the Nehru – Gandhi family is also proving to be a handicap for the party.  The first family of Indian politics no longer generates the aura it had a decade ago. The Congress Vice President Rahul Gandhi has long been pitched as the leader who will succeed his mother Sonia Gandhi as the torch bearer of the country’s oldest political party. The young Rahul Gandhi as he is called by the party has shuddered in accepting the responsibilities of a leader. His inability to energize the party cadre and galvanize crowds has cost the party dearly. The speeches made by the party leaders especially by Rahul Gandhi and Sonia Gandhi reflect how disconnected from reality the Congress netas are. In repeated election speeches including the ones recently made in Maharashtra and Haryana they kept stressing on the rights based model of governance personified by their party and one which led to their downfall. The party must realize that in an era where every individual wants to seek out the maximum benefits for oneself selling the dream of a minimum assistance will not generate confidence amongst the voters.

For the Congress to still be relevant in the changing political landscape of our country it is vital for the senior leaders to take up the challenge of reinvigorating the party cadres all over India. The strengthening of the party cadre and its grass root level organization will be an extremely tedious process given the fact that successive defeats would have led to demoralization, abandonment and defection amongst the ranks. The party must decentralize power from the family and few around them to state leaders and back the actions of these leaders completely. The party has always performed well in states where regional strongmen were given the reigns of handling elections. Tarun Gogoi in Assam has repeatedly won elections due to minimal interference from the party high command based in Delhi. The same goes for Virbhadra Singh, Siddarmaiaha and Oomen Chandy all of whom won elections in Himachal Pradesh, Karnataka and Kerala respectively because of lack of meddling by the high command. The Maharashtra and Haryana polls are all but lost for the party. Similar trends are likely to continue in every forthcoming state election if the Congress does not change its strategy

It has been 30 years since we have had a strong government not bound by the restrictions of coalition politics. In a democracy it is essential that a strong government is complemented by a robust opposition. It is the role of the opposition to constructively help in governance by highlighting those issues that are discarded by the government. It is critical that a party with a pan India presence such as the Congress assumes the role of a constructive opposition to check the rise of regional parties such as the SP, JD(U), DMK, BSP etc. These parties have always compromised national interests to ensure regional political gains and had thrived during the rise of coalition politics. It is fundamental for smooth governance that the main opposition in parliament is not a coalition of regional parties but a single national party. The Congress needs to revive itself before the power vacuum created by its dramatic fall is filled by regional parties threatening national interests. Thus the re emergence of the Congress is not only good for the party but also critical for the larger national good.