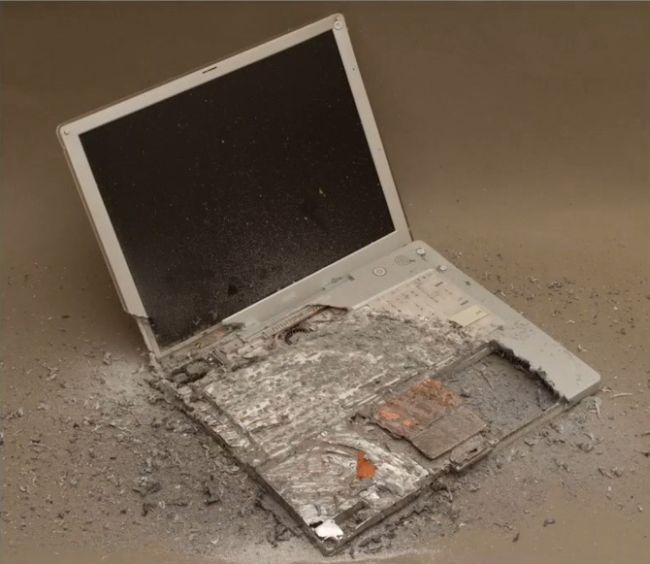 Creativity in destruction is a foray in art that always manages to capture the imagination of the onlooker. Animator Simon Gerbaud’s project to destroy everyday objects like shoes, chairs, a hair dryer or even a laptop, takes the original concept of Jeff Koonz’s one step further.

Gerbaud’s execution of his subjects is a little similar to the stop motion by Skretch. What makes Gerbauds vision and exhibition unique for others, is the way he dissects and executes his sections. The step by step sessions are much more intriguing and end up creating a greater visual impact on the viewer. The reverse sequence displays a heap of dust that coagulates to take the form of a laptop with all its components, the hard drive, mother board, screen et all.

The interactive installations in three separate rooms are loaded with sensors that detect movement of people. The wooden chair in one room actually vanished into the wall when approached by people and the shoe vanishes into thin air on detection of sounds that are high pitched. Viewers can also blow away the lap top when they blow air on it .

In his most recent creations Gerbaud, applied his tactics to a humble hair dryer, a refrigerator and a cart for shopping. The videos are mesmerizing and provoke a thought process in the mind of the viewer. The video displays a white bull ground to pieces and followed by a complete reversal of the reaction. A brand new bull rises out of the dust, but it’s a black one this time, with a cow boy on top. In another stop motion sequence the viewers are left dumbfounded when they see a shopping cart transformed into an animal cage.

Stop motion illusion is a relatively new science with loads of potential. Innovators like Gerbaud are doing exceptional work based on the findings of early pioneers like Jan Švankmajer, in order to take it to another level. Destruction and reconstruction is a learning module essential for all humans. To be able to watch creation out of dust never fails to arouse the curiosity of most of us.